I spent the better part of this afternoon upside down with my head in our rainwater cistern battling the all predatory forces of heaven and earth. I think I’m winning.

Spring is the time for grand designs, and having both finished half of my gate and said goodbye to our first large group of guests, I figured it was time for something more ambitious. For years now, we have aspired but failed to keep up with the Jones’s, or more precisely, the Bousquets. But this year will be different.

Whenever I am in the village and have a spare moment, I peek into the Bousquets’ vegetable garden. It is immaculate, every year. There is never a weed in sight. Their perfectly staked tomato plants always produce beautiful red fruit by the hundreds. Their lettuces march in perfect rows and seem blessed with some sort of natural slug-repellant. Their spring onions stand up straight like little soldiers. They even have a row of grape vines, tendrils neatly tied up comme il faut. And they manage all of this in a modest village garden. If they weren’t so nice, I’d hate them.

Here in the French countryside the potager, or kitchen garden, has long been an art form and, I suspect, a badge of rural civilization. Our various neighbors seem to produce huge quantities of beautiful fruit and vegetables with almost no effort, possessed as they are of the local lore passed down from generation to generation of farmers and country gardeners. Their generosity is equally as effortless, bringing both the lore and the results of it regularly to our door: eggs and figs from Richard and Barbara, tomatoes from Madame up the road, mushrooms from M. Dubois over the hill, and a dire warning from our roofer about the upcoming Saints de Glace (the “ice saints,” the last days to expect a late frost, specifically the 11th-13th of May). From bottles of homemade walnut liqueur to bags of meat, we have received, through the kindness of others, the fruits of this overabundant earth.

I can’t help but suspect that this generosity is not unmixed with pity. The results in our own potager over the years have not been stellar. We did well with tomatoes one year, but the next year they all rotted after a very wet June. The raspberry bushes Claire gave us are still alive and produce a handful of berries every year, but they seem resentful about it. There was one courgette plant that seemed unstoppable, but we had to search for the courgettes among a forest of weeds that relentlessly invaded the garden. And our attempt at growing lettuce led to nothing more than a few very happy slugs. Only the young fig trees and one ferocious cayenne pepper plant could be called an unmitigated success. Even the basil seeds Sophia sowed carefully in pots in our guest bathroom to protect them from frost have not deigned to grow more than a few millimeters above the soil before mysteriously beheading themselves like self-hating Bourbons.

But this time we’re getting serious. There’s no point living out here, we decided, if we don’t start to produce our own food from the land, to take another step in our efforts to be more self-sufficient and rely less on the big bad corporate controlled world beyond our horizon. So first things first, we plotted out a new potager on a very fertile sunny patch of grass behind the house, in plain view, and as close as possible to the kitchen. Once Serge had come with his rotavator and done the heavy work of removing the grass layer and plowing up the rich red earth, we could get started.

As rational, educated people, Sophia and I did our research, and in the process were reminded that vegetable gardening is more than a hobby – it is an epic struggle against the forces of nature. The potager is not a playground, it is a battlefield, and reading about all that could go wrong I became determined to march into it well-armed. I would start by working high quality fertilizer into the soil, a sort of compost available here called Or Brun, or brown gold, which would improve the chemical composition as well as the structure of the soil. I would get an electric wire as they use to fence in livestock in order to keep away the deer. Good quality seedlings, some sturdy stakes for the tomato plants, and a carefully chosen variety of crops to deter pests. A few essential extras – slug pellets, various organic-farming-approved potions to deter this and encourage that. A back of the envelope calculation suggested that we would be paying about two euros a piece for our home grown tomatoes. This was a sort of self-sufficiency a credit card company could get very excited about, but it wasn’t quite what I had in mind. Clearly nature is not my only enemy – the false comforts of the capitalist machine were also hell-bent on luring me to my ruin.

So this is where lore comes to the rescue. I was sad about losing the electric fencing, but the lore is particularly rich when it comes to keeping the deer away. A length of twine soaked in gasoline is said by some to keep the lovely little beasts at bay, but a garden reeking like a mechanic’s workshop falls just a little short of my idea of bucolic. Scattering human hair is said to help, and human urine is also supposed to be effective. Great. I think I’ll start with the suggestion on one website of hanging bars of perfumed soap at intervals. I’m all for following expert advice, but finding the right expert isn’t always easy. 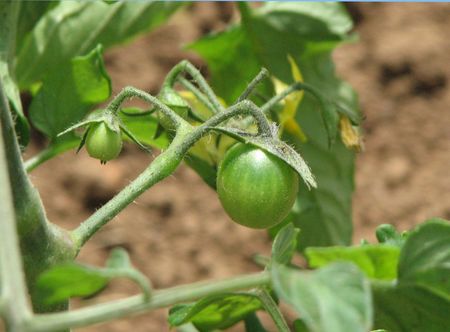 Keeping the cats from turning the garden into a litter box requires garlic, but slugs are more exigent. They like beer well enough to drown in it, so apparently I’m meant to place little bowls of Kronenbourg here and there to lure them to an inebriated end. These things I can deal with. On balance, I’d say better the radishes smell like an Italian restaurant or a pub than a garage or public toilet.

The other basic needs we need to fill, preferably without doling out too much cash to chemical-producing corporations or the water company, are food and water. We collect rainwater in our cistern (hence my subterranean adventures this afternoon recoupling some pipes that had come loose over winter), but fertilizer is a challenge. The answer is obvious, of course, but it brings us back to the smell question, and the scent of horse’s backside might, I’m afraid, put the slugs off their beer.

The lore provides the ideal answer – you put nettles in an old pillowcase and soak them for a couple of days until they form a dark, hopefully only moderately smelly, tea. Our pampered vegetables will be drinking nettle tea and inhaling the scent of lavender soap, doing their dignified best to ignore the slugs as they sing off key and pick fights with each other.

Well, I’ve already made a concession or two. I did buy a bit of chemical fertilizer to get us started, and I found some inexpensive garlic pellets designed to last outside specifically in order to scare away cats. This evening our cat curled up amongst the scattered garlic pellets and licked himself in flamboyant contempt.

These tomatoes had better be damned good.