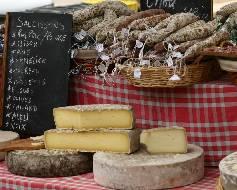 When Pauline Macmillan was invited to the wedding of a French friend in France she knew she had to do something about her French. Originally from Australia but living in London she had studied the language for a couple of years at secondary school and more recently had done some study in the evenings. ‘But I knew the only way I could really experience the wedding was to be able to speak more French,’ she says.

Pauline chose a week long immersion course in Lille, France in which she not only received a total of 20 hours of tutorial, but she also stayed in the home of her tutor for even more conversation. ‘I couldn’t escape back into English at the end of my study time,’ says Pauline, a bio-scientist at a London hospital. ‘For a week the only language I spoke was French. We only switched to English if I got stuck and couldn’t explain myself.’

Pauline’s tutor, Anne, was a teacher who lived by herself in an apartment in the centre of Lille.‘We had lunch together everyday and Anne even took me shopping so I could buy a dress for the wedding,’ says Pauline. ‘That was such an experience. I got a real insight into the French woman’s attitude to clothes! They don’t believe in dressing just for comfort!’

Pauline, 42, felt that during her time in France her language skill level went from advanced beginner to intermediate. ‘I had a greater vocabulary and I was definitely thinking more quickly into French,’ she says.

According to Barry Haywood from language school Eurolingua, immersion learning is the best way to learn a language. ‘If you can’t slip back into your native language at the end of the day, you have to communicate in the language you are trying to learn,’ he says. ‘Not having interference from your mother tongue makes a big difference to a person’s ability to learn.’

It takes, on average, about between 80-100 hours of learning a week to go from one level to another, making immersion learning one of the most time-efficient ways of learning.

‘And a language is a great deal more than simply grammar and vocabulary,’ says Florence Sobra from Academie de Langue France Mediterranée (Alfmed). ‘It’s also, and above all, a means of communication between people of the same culture and country. That is something you can never learn in books but an intensive French programme can enable you to do that, putting the stress on communication methods and on learning by experience.’

If you’re planning to come and live in France, an immersion course may be the best way to help you adjust to the country and its customs. It can also be very helpful for teenagers who often find it difficult to adjust to a new school and a new language. There are also immersion courses that combine different activities such as cooking or sport, with learning the language.

Best of all, perhaps, at the wedding a few days later, she was able to talk to the parents of her French friend, something she wouldn’t have been able to do before her course. ‘It was just simple conversation but it was really nice to be able to do it,’ she says. ‘It made all the difference.’

*Eurolingua offers a variety of one-to-one homestay tutorial programmes around France. It also has a series of language programs at its school in Montpellier, with tutorials in the morning, followed by organised cultural events in the afternoon. It also does work experience in hotels. For more information see www.eurolingua.com

*Alfmed allows you to combine learning with sports such as golf, horse-riding and sailing. It also offers work-experience positions within a French company. For more information see www.alfmed.com

View our directory of language learning schools in France