Santon Figures and the Crèche 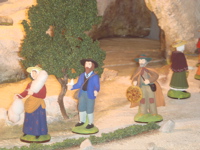 The depiction of nativity scenes, or crèches as they are called, dates back as early as the 17th century in France. In many aristocratic and middle class homes, the predecessor of today’s crèche appeared in the form of decorated glass-fronted boxes called grottoes or rockeries. These crèches depicted the baby Jesus or scenes from the lives of Christ and the saints. The figures were made of wax, bread dough or spun glass and were set in an imaginary landscape of flowers, waterfalls and animals evocative of paradise. When Provençal santons appeared in the 18th century, the family crèche became even more popular and in many cases contained up to 40 different characters.

The crèches would not be what they are without these famous santons, representing various popular Provençal figures. The first ever santon came from Marseille; the oldest mould being that of Lagnel, which is exhibited at the Museum of Old Marseille (the Maison Diamantée). All santons are cast in an original mould, which the santon-maker then leaves to dry before the santon is varnished. The santon-maker then usually makes a plaster mould, after which the santon is then cut at its base and trimmed all around before being pressed by hand for a second time in this mould. The santon is then left to dry before being trimmed again and then painted.

These figures take their place around the baby Jesus, Mary, Joseph and the three wise men, whom are only put in to place on the 6th of January.

There are a number of famous santon makers in Provence. One of the most famous of all being Philippe Fournier, located in the town of Séguret, where the names of seven master santoniers are listed, all “Master Ouvriers de France”.

Previous Article Finding Your Dream House in the South of France
Next Article French verb focus: devoir, ‘to owe’ or ‘to have to’