What is Bastille Day? France’s National Day or “Fête Nationale” 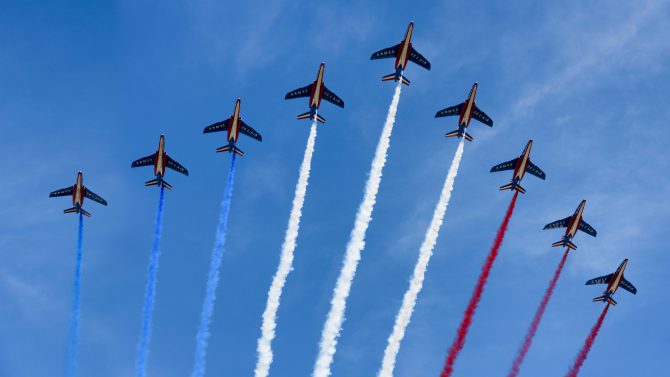 The national holiday on 14 July in France is commonly referred to as Le Quatorze Juillet, though in English it is usually called Bastille Day.

This is a day of both celebration and remembrance throughout France, a day on which the country unites to mark the storming of the Bastille prison in Paris on the same day in 1789 (one of the key events of the French Revolution),and a day to generally bask in the glory of being French.

In fact the modern holiday is a commemoration of the 1790 Le Serment du Jeu de paume (the tennis court oath) that took place on the first anniversary of the storming in the tennis court at Versailles– delegates from all over France attended and pledged allegiance to a single national community in the spirit of Liberté, Egalité and Fraternité.

Decades later in 1878, Third Republic politician Benjamin Raspail created a law that would make 14 July a national holiday that the people of France should “celebrate with all the brilliance that the local resources allow”.

Why is it called Bastille Day?

The Bastille building itself epitomised the absolute monarchic power of Louis XVI, so its capture was highly symbolic – it was a stern signifier of the oppression of French citizens since most prisoners kept there were anti-Royalist. In fact, just seven prisoners were being held there at the time of the storming but such was the impression that the event made, it became a symbol of the uprising of the modern French nation.

As for the word bastille, it means fortification, and is an alternative spelling for bastide – a common sight on signposts in southwest France where fortified villages remain popular with visitors today. The word bastide, meanwhile, comes from the Provençal word bastida, meaning built.

How do the French celebrate Bastille Day?

In France today, the main official celebrations take place on the Champs-Elysees on the morning of 14 July. A spectacular parade of military and naval cadets kicks things off, followed by infantry and motorised forces and a fly-past by the Patrouille de France. Each year a different specially invited allied force is also invited to join the parade.

Elsewhere around the country the party spirit is embraced in equally spectacular, though sometimes more informal fashion. Firework displays (feux d’artifices) take place in most towns and cities, from Cavalaire-sur-Mer on the Riviera to Strasbourg in Alsace – these are often huge, with locals taking the opportunity to have a picnic with friends and family.

In many smaller towns and villages around France there’s the bal populaire, which sees locals get to grips with traditional dances and each other, usually in the central square.

For some towns, the date is also a good excuse around which to build a more extensive cultural programme. In Carcassonne, for instance, the Festival of the Bastide features over 70 free-entry theatre, French pop, jazz and world music gigs. It’s a superb mélange of genres and venues – where visitors can really get a feel for the breadth and passion of contemporary French culture.

On the big day itself, the medieval Cité comes to life with the most incredible fireworks display. One of the largest in Europe, it lasts 25 minutes and culminates in 1,200 charges detonated over the 600m of the Cité’s facade in just six seconds!

Previous Article What is included in the sale of a property in France?
Next Article In Praise of the Sunny South