My Life as an Artisan in France 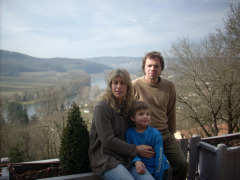 After 10 years spent living and working in London as a painter and decorator, Giles Stonor moved to France and established himself as an artisan. In France since 1999, Giles has been able to take advantage of a whole host of interesting new opportunities that have come his way. Amongst them was the restoration of the largest Chartreuse in the Dordogne area. Here Giles tells FrenchEntrée his story.

Back in 1999 when I decided to leave Britain for a new life across the Channel, you needed a carte de séjour in order to live and work in France. For that, I had to have a minimum six month contract – mine was with a French decorating firm. When that finished, I spent a week gaining further experience in Cahors before setting myself up as an artisan.
Slowly but surely I built up a good clientele. Many new customers came as a result of word of mouth recommendations but advertising in a newspaper aimed at English speakers in France also proved worthwhile. However, one particularly important contact came about for another reason altogether…

My preferred range of paints by Farrow and Ball used to be quite difficult to come by, but the colours work so well on traditional stone buildings that I kept looking until I’d found them. Eventually, I found an interior design company in the Dordogne that was able to help on this front. Little did I know that this company would be even more useful in the days and weeks to come. 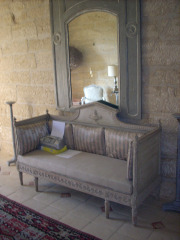 They introduced me to an interior designer who needed some furniture painted, as a result of which I was offered a full-time contract that involved painting and restoring the largest Chartreuse in the Dordogne area.

It might have involved a bit more travel than I was used to but the project was varied and enjoyable, so I was happy. I had gained a qualification in restoration and decoration while I was in England and the opportunity to work on the Chartreuse in the Dordogne would allow me to make full use of the skills I had learnt.

The designer would source furniture for me to work on from various antique fairs and brocantes in the surrounding area. Some pieces needed more work than others. There were those that were sent off for re-upholstering and those that would simply need to be restored and painted.

I was also required to paint the house, both inside and out. Using a lime wash on some of the interior stone walls inside produced a warm effect without losing the stonework. As for the exterior woodwork, including all the shutters, they were painted in Farrow & Ball’s light grey, a shade that worked exceptionally well with the colour of the stone, that in itself took two and a half months to complete. 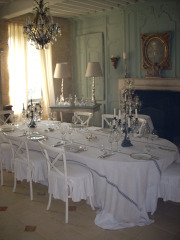 By the time this contract came to an end, I found myself in a position to take on another job working on a large Château near Domme. This time, I was called upon to lend my expertise to the task of painting and distressing the old panelling in the dining room and giving the newly built kitchen a coat of paint.

Since then of course, I have worked on numerous other projects. The effects of a recession have been felt to an extent but so far the gamble appears to have paid off. Quitting the bright lights of the big city was never going to be easy but the years have passed and I for one wouldn’t change anything about our quality of life here in France.

If you would like to see some examples of Giles’ work, visit Moulin de Latreille for a look around the old mill he has restored and transformed into a B&B.
To discuss a renovation project, Giles can be reached on +33 (0)5 65 41 91 83