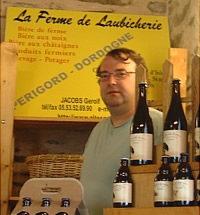 Beer brewed on a French farm.

La Ferme de Laubicherie is a very special place to stay. The Chambres d’Hôte, at Lanouille near Limoges (Dordogne), are catered for with a traditional Table d’Hôte. The owner of 11 years, Gerolf Jacobs (from Belgium), explains that this tradition implies that all the guests sit together for meals, at one big table, eating home-produced food. But in this case the food is really, totally produced on the farm, by Gerolf himself. From his own organic lamb, and veg from his enormous potager, to the flowers on the table, nothing his guests are served has been through the production, processing, handling, packing, storage, distribution and stocking which renders most supermarket food tasteless. If there is anything which Gerolf wants to serve, but he doesn’t produce (such as butter, milk, goats cheeses or pork), they are bought from the neighbouring farms and co-ops which employ wholesome production methods.

But the most special thing about this farm, and the reason for my visit, is the micro-brewery. Gerolf makes fascinating beers; amber, blonde, and beers flavoured with the local specialities of walnut, chestnut or truffle. (I was dying to try the truffle beer – could it work?) He has developed his own unique production methods for his beer, which he sells straight from the farm, from local markets, and he is employed for functions, where he sets up his own bar selling his chilled beer on tap.

The bottled beer is unusual in that its second fermentation takes place in the vat, rather than the bottle, during which it is chilled in pressurised lager vats for 4 weeks. This means that the yeast residues can simply be drained off. The clear beer is not filtered and contains no chemicals, such as beer finings. The beer is bottled under pressure, and Gerolf maintains a policy of high quality over quantity in his beer production. The beer is, naturally, made with barley that is grown on the farm.

So how did Gerolf end up doing whjat he does? He told me that since the age of 14 he knew he wanted three things in his life, “France, cooking and agriculture” – his chambres d’hôtes combines all three requirements. By the time Gerolf was 18 years old he had a farm of 200 animals. Then, after a career in the food industry, as an economist and then a consultant, he finally realised his dream and moved to his farm in the French countryside. The beer brewing was only ever meant to be a hobby, but Gerolf took such care in its development that the beer has become an in-demand product.

I bought some of the truffle beer to take home. The beer was fantastic. The truffle flavour was noticable, unusual and enjoyable, the aroma was amazing. It definitely did work as a cleverly-balanced flavour for beer, and I would choose it again, but I’d have to be in a ‘truffle beer’ mood. Next I’ll try the walnut and chestnut varieties… 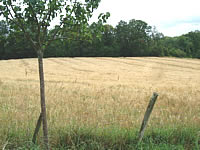 Previous Article The Right Tool for the Job
Next Article Authentic olive tapenade recipe from Languedoc, South of France