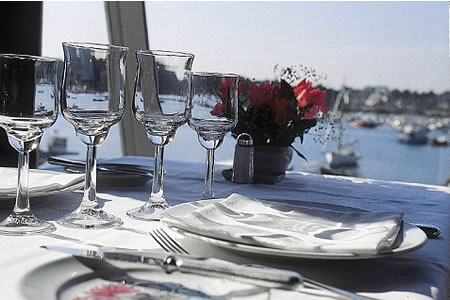 Do you know the difference?

A Bistro is a small informal establishment. The menu is short and would include dishes such as Coq au Vin, French Onion Soup, Salade Niçoise and Côte de Porc. They offer simple, inexpensive meals in pleasant surroundings with competent waiters bustling around. Service is fast and prices are low. Bistros must turn their tables over to make a profit. A Bistro would have a chef and an assistant. A waiter would be expected to serve food and drink to around thirty covers (seats) and turn them over once or twice a night. The owner would look after the bar and the cash.

A brasserie a small restaurant serving beer and wine as well as food. They are usually quite large with long opening hours and serve food throughout the day. They have a varied and well priced menu. Typical dishes are Fruits de Mer, Choucroute, grills and simple fish dishes. Service is rapid from overworked waiters dressed in black and white. Traditionally many of the dishes are plated in the room. The surroundings are often smart and the atmosphere is one of noise and bustle, generated by the turnover of tables that their low prices require to make a profit.

A brasserie is a pleasurable place to visit but not a major culinary experience. They are used in a number of ways, for lunch, for a drink, for dinner and for supper. A brasserie would employ a chef and four assistants for approximately two hundred customers a day. A waiter would serve similar numbers to his compatriot in a bistro and there would be a barman and a maitre d’hotel overseeing the seating and service.

A restaurant provides a setting, service, food and wine list that is correct. The word correct means that the food is refined, the service attentive and the tables are properly spaced in a well appointed dining room. The food would be Haute Cuisine with sophisticated forays into the other branches of French cooking. You would spend the evening dining here, it would be a major event.

A three star restaurant, in France, seating 80 would have a director in charge of the dining room; who would, in some cases be assisted by a premier maitre d’hotel followed by at least two maitre d’hotels each overseeing a chef de rang (waiter) each assisted by one or two commis waiters (junior waiters) there would also be two sommeliers (wine-waiters) In most cases there would also be a barman, cashier, toilet assistants and doorman. There would be almost no turnover of tables. The kitchen brigade would be from 14 to 20 consisting of executive chef, and sous chef plus four chefs de parties and eight junior chefs.