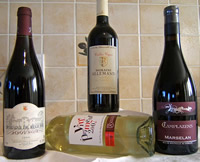 What is a Vin de Pays?

There are so many categories of French wine, that it can get very confusing! Put simply, Vins de Pays wines are a step up from Vin de Table, and a step down from Vin Délimité de Qualite Supérieure, which, in turn is just below the better-known Appellation d’Origine Controllée. These categories guarantee the region the wine comes from, the fact that it is characteristic of that area, and the level of its quality (table, country, ‘AOC’ etc). More on these in David Best’s guide to buying French wine.

How Vins de Pays Came To Be

The subject of a higher grade wine in the Vin de Table category, to be called Vin de Pays, was first muted in 1964. It was to form part of the European Wine Law, as laid down in Brussels, and was designed to have an equivalent in all countries of the EEC – Vino da Tavola in Italy, Tafelwein in Germany. In France, the first decrees were issued in 1968 covering a few ‘Departmental’ and ‘Zonal’ categories, but it was not until 1970 that today’s best-known ‘Regional’ categories were introduced. Concluding the history lesson on France, there are now over 150 Vins de Pays on the statute books. As the EU has grown, so ‘VdeP’ (or its equivalent) has been introduced into all the other wine producing countries of the EU. Just like Topsy, “it just grewed and grewed!”

Vin de Pays has the great advantage over the Vin de Table in that it can include the vintage, two grape varieties, and the locality within the country on the main label. This gives the purchaser, even with a limited amount of wine knowledge, some idea of the style of the wine and where in France it is made.

These cover the largest geographical areas – there are 7 including Corsica. ‘VdP’ d’Oc is by far the best known, as well as the largest in production terms. Over 80% of the Pays d’Oc wines are red. In contrast, the romantically named VdP du Jardin de la France, covering the majority of the 1000 mile long Loire River, is predominantly white wine. With reasonably easy names to understand ‘Regionals’ are ideal for both home and export markets. The large name merchants – either bulk purchasing or bottling themselves -, supermarkets, and even national hotel chains seem to prefer Regional VdePs for their listings.

There are several ‘departments’ (like counties) in each region of France. To consumers in France, who have a reasonable geographical knowledge of the country, the names of the departments should not present too much of a problem, but for overseas customers it is far easier to have just a few names (i.e. regional) to explore rather than a multitude of departments.

As far as wine volume is concerned, the areas of production are smaller, the producing grape varieties may be more limited and the controls tighter, thus making the wines more in character with the production area. To local consumers and tourists, more localized production can mean more ‘authentic’ wines, gifts that ‘come from the area’ etc. As far as availability is concerned, the ‘grand distribution’ outlets, some hotel chains, and some specialist wine shops may well list Department VdPs under the ‘local purchase’ schemes. There is of course the possibility to produce the same wine, if properly declared, with both Regional and Departmental labels to suit the producer’s different markets.

Zonal wines are from smaller, more specific areas than the departmental VdP. In November 2006, on the official map by VINIFLHOR – Office National Interprofessional des Fruits, des Legumes, des Vins et de l’Horticulture (with a name like that you need an identification by initials!) – 93 Zonal VdePs are listed, and the number has grown since.

Many of these are sold only in outlets within their production area. To track down where some of these Zonals are, you need more than a basic geographical knowledge of France. Nevertheless, they have their devotees and also a greater number of variations than their larger brothers above. A good example here is the use of the VdeP des Côtes Catalanes label, where a superb Muscat Sec, not allowed as an Appellation Controllée or elsewhere in the VdeP d’Oc, is being well received in Northern Europe and of course locally among the hotels, restaurants and wine stores; close to the border with Spain. Many ‘Zonals’ cater for the local interests, particularly in tourist areas.

The variation of consumer buying price here in France can be from €2 a bottle to as much as €20 euros for rarer wines, like those produced by the monks of the Abbaye de Lérins, in the Bay of Cannes.

Decision as to which Vin de Pays to buy is not easy, because the choice and variation is huge. The best solution is to taste before you buy in bulk, which for the lower priced wines need not be a problem, particularly if you are buying direct from a producer. For the supermarkets in France, you may need to visit them at the time of their Annual Wine Fairs (e.g at the beginning of October) or other wine promotions, if you want to taste. There are also a number of wine exhibitions held throughout France, in the lead up to Christmas, which can be worthwhile visiting. For those travelling over the Channel or from Belgium, Holland and Germany, a quick look at the ‘local events’ for the period of your visit can often be very fruitful, alcoholically speaking.

If you can’t try before you buy, then why not explore wines, region by French wine producing region? You might make the odd mistake, but you’ll be learning your own geographical tastes as you go, which is enjoyable in itself.

Most of the wines in this category are for ‘current drinking’ and not for maturing, even for a couple of years. Many nowadays have either a plastic ‘cork’ or a screw cap, neither of which are designed to ‘mature a wine in the bottle’. The wines are, after all, only the upper grade Vins de Table.

Before the letters of contradiction start arriving – yes, there are exceptions, well known and well accepted – even the good old Vin de Table can have exceptions where the wine is not covered by EU Legislation.

For example, a wine produced by and tasted with Vincent Paris in Cornas in the Northern Côtes du Rhône, called ‘élixyrah’. The grapes (red syrah) had been left to develop botrytis cinerea (noble rot), similar to the great sweet wines of the world. They had developed raisin like characteristics, with extremely high sugar levels, and had lost a good 80% of their juice. When fermented, the yeasts died when the wine reached just 11% alcohol. The end product? An exceptionally sweet red wine with underlying honey characteristics; an ideal accompaniment to Christmas fruit cakes or puddings. This is very much of a rarity in France, and can only be made when the conditions are right. The cost from the cellar is €30 for a 50cl bottle.

Anyway, élixyrah is an ideal bottle to keep for a special occasion. How long? We don’t yet know, because this was the first time it was made, but, unlike most Vins de Pays, it will probably be good up to 5 years.

For the most part the Vins de Pays Category is designed for those of us that enjoy French wines on a regular basis but do not have either the money, knowledge or the desire to go ”up market’. Most VdPs have a vintage and many have grape varieties quoted, a major help to those less knowledgeable of France’s myriad of village names and Appellations d’Origines Controlées. The best advice; taste before purchase. But remember the producer’s name can be as important a guarantee to the quality as the region, department or zone from which it comes, so a bit of research can limit the number of disappointing bottles you try.

Select with care and good hunting!