Macarons are the new cupcakes 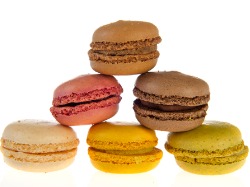 First came the cupcake craze, then French macarons took Sydney by storm. Rachel Guernier lives in Australia and loves them so much, she learned how to make them, but admits “They are so time consuming and it is hard to make a wide range of flavours in a small batch. I’m over the moon that these péchés mignons (literally translated as ‘lovely sins’) are now easy to find in this part of the world.” Here, Rachel explains what makes them so special and how the trend has taken off…

Made famous by the Masterchef Australia series, where chef Adriano Zumbo featured this little delicacy from his iconic Balmain pâtisserie, macarons have become the mouthful of the moment in Sydney. Gourmet Traveller has featured them in their pages and over the years, the craze has caught on with foodies hunting city wide for the best ones.

A macaron (also known in Australia as a ‘macaroon’) is prepared in many regions of France. Its name is derived from the italian word ‘maccarone’ or ‘maccherone’ which evokes the crushing or beating of the almond paste – one of the main ingredients – with egg whites and sugar.

The colourful Paris macaron as we know it today used to be called the ‘Gerbet’ and was created by Pierre Desfontaines of Ladurée in the 1830s. It is thought that he was inspired by the earlier ‘Macarons de Nancy’ or single layered macarons found at the time in varying recipes across France, which were originally from Italy.

Pierre Desfontaines transformed what was then a single almond macaron into a double layered version where two brightly coloured almond meringue disks were sandwiched with a layer of buttercream, ganache or jam. Typically, the disks were made from an almond base but other nuts and flavours can be used to vary the flavour and compliment the fillings.

Ladurée became world-famous for macarons and even has gift box ranges designed by the likes of Christian Lacroix, Sonia Rykiel and other famous brands to add an extra layer of luxury when buying a box. Macarons now come in all colours and flavours and have become an international luxury.

In Sydney, Mag’M Macarons are imported frozen from France by Deshel Foods and enable smaller pâtisserie operations in Sydney to literally de-frost and sell! At the beginning of the macaron craze, I spotted them in a number of bakeries and I have to say, they are quite an impressive export from France. Better quality pâtisseries hand make them on site and a good fresh one does beat a frozen one!

Several years back, before the craze hit, you were lucky to find them in up-market hotels or on leading restaurant’s afternoon tea menus. Lindt then bought them over to Australia, naming them ‘Délices’, but I think their version seems too dry and not the perfect texture and consistency.

A macaron needs to be perfect to offer the satisfaction its reputation deserves. They should have a thin crispy exterior, followed by soft chewy meringue and a smooth and creamy centre. Often the almond based shells are simply coloured for effect and the determining flavour is in the filling.

In Sydney, La Renaissance, part of Baroque located in The Rocks has a good range of quality macarons. MakMak has had some great reviews, where interesting flavours such as black sesame and even peanut butter, are on offer. MakMak delivers to some lucky suburbs or can be found in a small range of stockists around Surry Hills.

Adriano Zumbo in Rozelle is always a favourite and well-loved chef Adriano likes to experiment with exotic flavours that change regularly in his trendy café. At the time of writing, a satay flavoured macaron or kaffir lime and ginger are available to excite your palate!

Sydney is heavily influenced by Asian flavours and both MakMak and Adriano Zumbo look like they are having fun experimenting with these interesting flavours, although the classics: salted caramel, strawberry, chocolate and vanilla, can always be found for the traditionalists.

There are many other local institutions but these three stand out as having some of Sydney’s best. At anything from $2.50 to $3 a piece, macarons present a very good business strategy… one is never enough and a good one is, dare I say it, worth the price!

Macaron towers can now be ordered in Sydney at many macaron stockists, perfect for a fancy party. Baroque even released a special alcohol range for Bastille Day, with one macaron flavour in blue, white and red, the colours of the French flag.

Macarons have opened the door to more refined pâtisserie in Sydney and it appears that these ‘lovely sins’ are here to stay!