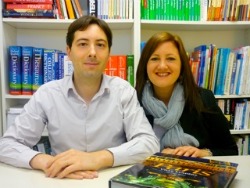 Pierre and Rachel Guernier (originally from France and England respectively) run a French language school in Sydney where around 90 students have French lessons each term. Their company, French Moments, was set up in 2006 and is all about embracing French language and culture.

Pierre and Rachel are passionate about all things French. They run events including themed dinner parties, travel advice sessions and translation services to bring language learning to life. They also organise cultural trips to France for those in Australia.

Pierre was born in Nancy (Lorraine). He is a specialist in French geography, history, culture and European current affairs and holds a double Masters of International Relations and of Translating and Interpreting. He is an accredited NAATI translator and has a vast teaching experience, lecturing at university level in France and teaching in language schools in London, Paris and Sydney.

Rachel is originally from the south of England. She fell in love with France at a young age as her family spent many a summer in Périgord and the Loire. She is bilingual and worked in Paris for an American investment bank. Rachel was also involved in a London-based company that helped promote Alsace to the British and has experience in French companies in Sydney.