Guide to dog vaccinations in France

Prevention is better than cure 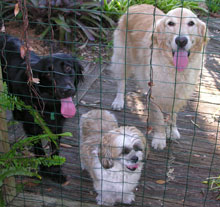 We occasionally see pets that have become ill, yet their illnesses could have been prevented or kept to a minimum if they had been vaccinated. A vaccine is designed to stimulate your pet’s immune system so they have a ‘memory’ of a certain disease. This means that if they come across this disease, they will have a faster and stronger immune system reaction to battle against it.

Puppies are given an initial course of two vaccinations (primovaccination), the second being given after 12 weeks of age. This is followed by yearly boosters (rappels) to ensure that your pet’s immune system is always vigilant and prepared in its constant fight against disease. In addition, your dog will have a clinical examination that can pick up other problems ranging from bad teeth to heart disease. It is an ideal opportunity to bring up any concerns or queries about your pet with your vet.

Older animals have a weaker immune system so it is just as important to keep their boosters up-to-date.

Most reputable kennels will refuse to take pets for boarding unless they have an up-to-date vaccine record including the kennel cough Bordetella vaccine.

[mrb]
The key vaccinations are:

Owning a Pet in France: Vets, Vaccinations, and Responsibilities

Rehoming Pets: Adopting a Dog or Cat in France

Pets and Pet Passports in France After Brexit: 2021 Onwards