My village: At home in St-Antonin 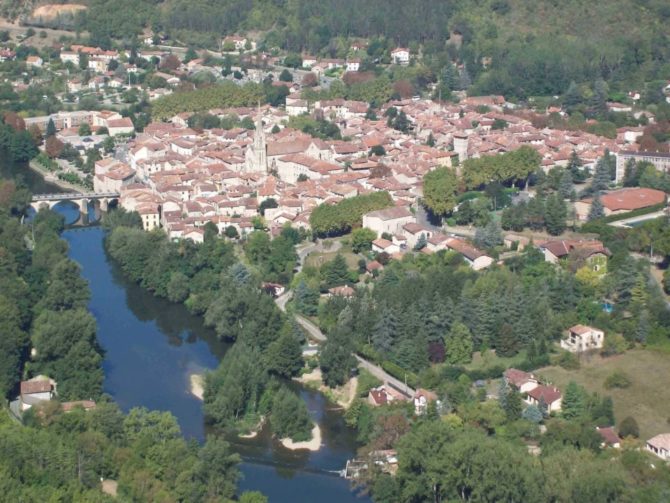 I always knew we’d chosen wisely when we bought our house in France, but now everyone can get a flavour of where we live. Our small town, St Antonin Noble Val, is the setting for the recently-released film, The Hundred-foot Journey, starring Helen Mirren. It’s about the rivalry between an established Michelin-starred restaurant and a newly-opened Indian brasserie. Now, we do have a couple of ‘gourmet’ restaurants and a few more, let’s say, rustic eateries. (“You can always get a pork chop,” mused one friend.) We don’t, sadly, have an Indian restaurant. The nearest is a Thai curry from the lovely Sardina, where we flock during the 10 weeks or so she opens each year.

Whenever I go into town, I’m still amazed that it has kept its identity and the cobbled streets look as they must have done when the troubadours roamed them. We boast the oldest civic building in France and a bustling Sunday market. We even have a few shops, mostly selling what one friend described, somewhat sniffily, as ‘hippy-type’ clothing. We have an English bookshop that suffers from frequent ‘fermateurs exceptionelles’, several hairdressers and, new this year, about four ice cream shops selling cones of many flavours. The other day I had a scoop of violet and a scoop of candyfloss ice cream.

Perhaps appropriately, we also have a cinema. All seats €6,50, but try to avoid using the loo. We get films from all over the world in their original language, with French sub-titles. Some blockbusters are dubbed into French, but you often come out with your senses reeling having watched a movie in Hindi or Swedish, with French sub-titles. The good thing about the cinema is you get absolutely no adverts. No trailers for ‘coming soon’, no ads for Coca Cola, Budweiser or the Star of Bengal. You go in, choose your seat, greet a friend or two, and watch the film. There’s not even a twee announcement asking you to turn off your mobile phone.

The process is slightly more complicated for the French members of the audience. They enter, they discuss the merits of various seats. They sit down. They get up. They move seats after more discussion. They sit down again and enjoy the film.

Other interesting aspects of life here include our singing doctor — my friend Judith gets a chorus of Hey Jude when he sees her; I, unfortunately, get Hello Dolly. Perhaps in keeping with the town itself, we get an old-fashioned service.

I needed a prescription, so the doctor called round. I was in the pool at the time. I did offer to get out, but he said there was no need, he would take my blood pressure anyway. His cuff did end up slightly soggy. The dentist initially professed to speaking no English, but slowly words such as ‘filling’, ‘crown’, ‘drill’ and ‘this won’t hurt’ have emerged. This is in contrast to our plumber whose English vocabulary starts and ends with ‘big problem’.

You can enjoy Doreen’s blog at www.anatozoflifeinfrance.blogsot.com

This article is an entry on our My Village competition.