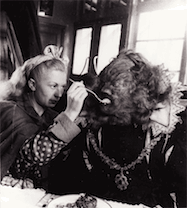 When the French do romance on film, it’s not just rom com-mon, it’s l’amour! Here is a selection of our favourite romantic French films, as voted for by members of FrenchFilmClub.com – the new online community for fans of French cinema.

Beautiful, poetic, sensual, romantic, passionate, magical – this is the ultimate love story fairy tale/fantasy where “love wins the day,” leaving you with a warm fuzzy glow.
Romantic love, inner beauty and obsessive love are the themes in Jean Cocteau’s re-telling of the Beauty and the Beast. Shot in sumptuous black and white, it stars Jean Marais as the Beast and Josette Day as Beauty and together they are outstanding. The enchanting and poetic castle scenes full of magic and imagination the active is tremendous and the humour enchanting.
This film is quite simply one of the greatest French films of all time and equally one of the most stunning pieces of fantasy-cinema ever produced. It is also, of course, one of the most charming and realised love stories ever filmed. 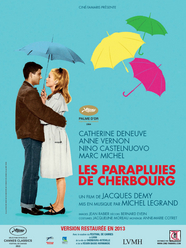 This is a musical, in fact, like an opera, every word is sung. But don’t let that put you off! For, Umbrellas is a film that will melt the ice in the coldest of hearts. This is a ravishing spectacle that is simply so joyful and moving all at the same time, that it is pure romantic heaven.
The film takes place in 1957, in Cherbourg. Geneviève (Catherine Deneuve) is in love with Guy, (Nino Castelnuovo) a mechanic working in a local garage. But, when her mother discovers their relationship, she is not at all happy. Guy is called up for military service and Geneviève is devastated. The night before Guy leaves, they pledge their undying love for one another.
Geneviève discovers she’s pregnant, but when she writes to Guy, his lack of response makes her believe she has been abandoned. Encouraged by her mother, she is forced to consider her options. When Guy returns from the war, he finds it hard to adjust to civilian life and his life takes a nosedive. Will he manage to turn things around? Will he and Geneviève find happiness, together or apart? Tissues will be required. 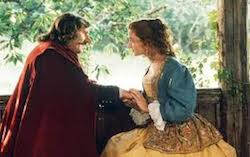 There have been numerous film versions of the story of Cyrano, the man with an over-sized nose, and his burning love for Roxanne, but Gerard Depardieu’s portrayal is by far and away the most romantic and passionate.
Colourful, comedic and full of great lines, this Cyrano is exuberant, bustling and full of energy and brimming with romance.
Despite himself being smitten with the beautiful Roxanne, (Anne Brochet), Cyrano unselfishly helps his handsome (but ultimately too-shallow) friend Vincent Perez woo the object of his affection. He pens love letters and poems baring his heart and soul, on behalf of his friend, helping to bring them together, whilst putting his own desires to one side.
It is the way Roxanne realises too late who the real author of these wonderful words is and Depardieu’s heart-breaking finale that brings tears to the eyes. 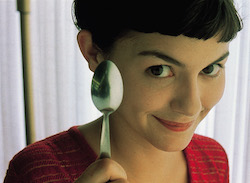 Amélie is a much-loved, award-winning rom-com, adored for its endearing charm and lightness of touch. This is a love story with a difference, which leaves you feel uplifted on every viewing.
Amélie (Audrey Tatou) is no ordinary girl and life has dealt her curious blows. She takes pleasure in the little things, such as feasting on crèmes brûlées, skimming stones across the Seine, observing people and letting her imagination roam free. Then, at 22, she suddenly finds her purpose in life: to solve other people’s problems.

This meddling leads her to invent all sorts of strategies to intervene in the lives of the people around her. However, Amélie’s mission is rudely interrupted when she meets a strange, off-beat young man, Nino Quincampoix. Nino works shift jobs on a ghost train and in a sex shop, and collects discarded passport photos left on ground outside photo booths.

He’s desperately trying to identify the stranger whose photo keeps turning up, when his search is suddenly interrupted by his encounter with Amélie. The stage is thus set for some exquisite romance, French style. 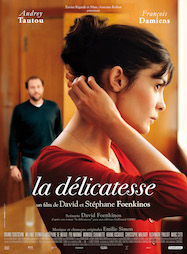 Nathalie (Audrey Tatou- again!) has the perfect life. She’s married to the gorgeous François, has wonderful friends and a fantastic job. But in a few moments, everything changes, when her husband is hit by a car and is killed. After this tragic incident, Nathalie is completely lost. Her only way of moving on is to bury herself in work.
Then, a very strange thing happens. One day, her geeky colleague Markus, comes into her office, and completely out of the blue, as Nathalie is dreaming about Francois, she kisses him.
The characters in this film are, as the film title suggests, very delicate. Markus is endearing and emotional; his shyness makes him seem vulnerable. He is not very attractive, as people have the habit of pointing out, but Nathalie soon realises that he is full of kindness and humour.

Watching Nathalie gradually find happiness again, step by step, is very touching and is sure to leave you with a strong sense of hope. (We certainly needed the tissues at the end.)

If you love French films why not join French Film Club? Head over to Frenchfilmclub.com to watch trailers, discuss films you’ve seen and sign up to receive our movie of the month on DVD.