Until 1987 we lived in Portsmouth, U.K., leading hectic lives and enjoying the everyday challenges of our respective jobs. We treasured our escape to France every year, each time discovering another part of this great country. In the summer of 1988 we rented a holiday home and it was then that the idea of moving to France permanently really took hold. We looked at properties in the Dordogne but nothing matched up to our ideas, so we decided to take the day off and drove, with our daughter, south to Cahors in the Lot Valley to see the magnificent Pont Valentre (medieval bridge over the river Lot).

The Lot is known as the gateway to the south with a climate appreciably better than its neighbour. We were captivated by the champagne coloured houses, hilltop medieval villages and our first taste of the superb Cahors wine.

How did it happen? One minute we were sipping coffee in a square opposite an estate agency and the next we were in a car being driven by a chic Frenchwoman to view 3 properties – and then down the lane, through the farmyard to Mondounet…. 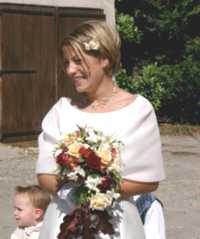 What an idyllic setting for the 17th century farmhouse and outbuildings, set up on the hill, overlooking two valleys. There was nearly a hectare of land (about 2 acres) – a large stone barn, bread oven and stable. It was so peaceful and somehow we knew that we had found our dream. The very next day we signed on the dotted line and moved in later that year – October 1988.

Restoration and conversions were carried out and the following year we were able to open our doors to our first holiday guests. And now after 15 years we still believe that moving to this beautiful part of SW France was the best decision we ever made. Nicola, our daughter was 10 years old when we arrived and after going through the French educational system to University level, she is now a bi-lingual translator, married to a Frenchman and living in the city renowned for its gastronomy, Lyon.

We have found so much to enjoy around this area: the colourful local markets (our local village of Montcuq has one of the best Sunday markets around); drinks and lunches in the pavement cafes; village fetes (wining, dining and dancing with the locals); visiting the chateaux and caves; music – blues, jazz and classical concerts – and much more.

We have some of the most beautiful countryside in the world; Vineyards around the corner for wine tasting; Superb country cooking and Michelin star restaurants. Not forgetting the warm welcome from the locals – and after 15 years, we consider ourselves among their number!

Peter and Zoe run a successful Gite business from their farmhouse near Montcuq. Visit their website to find out more.