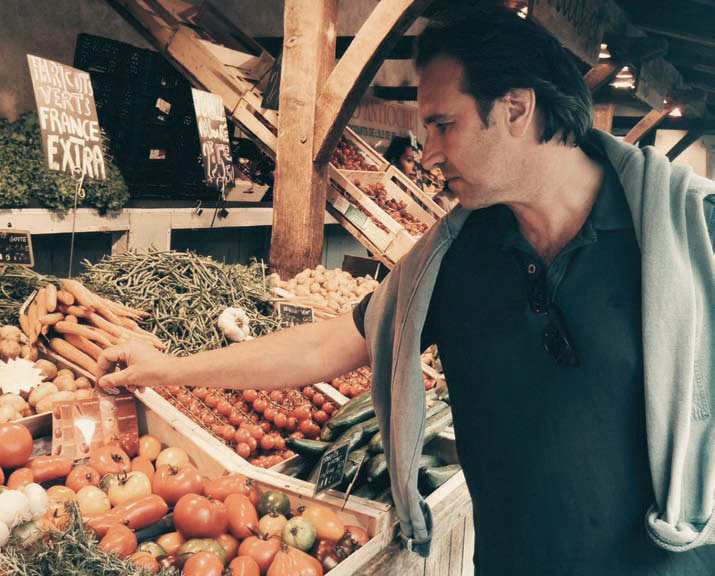 British celebrity chef Guy Wolley, a self-confessed Francophile, fell in love with the country when he moved to Paris at the tender age of 22. Here he discusses his love affair with l’Hexagone and its cuisine…

Tell us about your relationship with French food…

It’s my speciality. Although I did my apprenticeship in London, I went to live in Paris in my twenties and it completely transformed my life. I fell in love, not only with the French, but also with their way of cooking. I came home and opened a French restaurant. I love the way that a lot of French food is still done the same way it has been for centuries – be it cheese or olive oil, confit or cassoulet. Some would say I’m a bit of a dinosaur, but what I like is rustic food, done properly with fewer ingredients and big flavours. This is what the French still do.

Before we even walk into the dining room I might indulge in a little Pineau des Charentes as an apéritif, followed by a decent glass of Taittinger champagne. Then, to start, I’d have quenelles de brochet – quenelles of pike with a lobster or Cognac sauce. But if I were in Brittany, I’d go for a dozen oysters in some shallot vinegar with salt and pepper. I’d have it with a Sauvignon Blanc from Touraine. It’s a lovely, light wine, easy to drink and beautiful with oysters. I’d serve it with lots of bread and unsalted butter. My main course would be puy lentils and a confit of duck – really crispy on the outside and cooked beautifully in goose fat. It would probably have some really fattening potatoes dauphinoise on the side, as well as a lovely green salad dressed in proper French vinaigrette – Dijon mustard, red wine vinegar and olive oil is all you need.

To drink, I’d go for a Château Grand Moulin Corbières.It’s exceptional: big enough to take on those robust flavours and cut through the fattiness, but it’s also absolutely superb drunk by the glass.


When I’m with my mates on motorbiking holidays in France, which we go on twice a year, we play a game that my Father taught me. We order crème caramel and eat it in one without using our hands – great hilarity ensues! But, ultimately, my favourite dessert is a tarte aux pommes from Normandy, with some crème fraîche on the side.

Obviously, you need a cheese board. You could either do it the French or the English way, before or after the dessert – I don’t care, as long as I get it. I love a good unpasteurised Camembert. Then there’s Bleu d’Auvergne, Reblochon, Beaufort… I’m being greedy now, but I might have some Roquefort too. To drink, I’d have a Sauternes.

After everything, I’d have an espresso – and I have a soft spot for Calvados.

Do you plan to live in France again?

I’ve told my wife that within the next five years, we’ll buy a house in France.
When the opportunity came to go and work in Paris as a young man, I loved it so much that I stayed for three years – longer than the contract.
In your early twenties, my God, it’s a fabulous life. Still now, every moment I spend there – from the moment I step off the ferry or the plane – I feel energised by it. There’s something in me that has an affinity with the place. So as I get older and fatter and uglier, I want to be able to spend even more time there, eating and drinking, and getting even fatter.