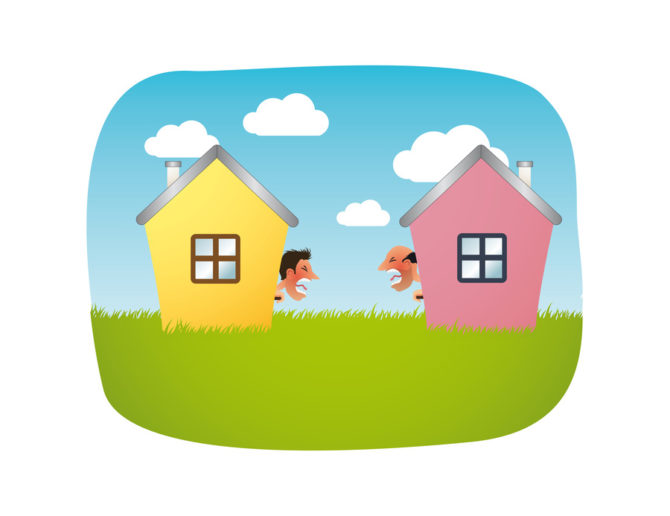 Nations have waged war over boundaries, arbitrary and shifting lines on a map; neighbours have locked horns and worse overland disputes and leylandii, sometimes with tragic consequences. Such thoughts were uppermost in my mind when Gerard, our immobilier, informed us that our front garden wall had been built on neighbour’s land. How this had not been picked up on when we bought the house now seemed irrelevant, particularly to Gerard as he had sold it to us! So much for the much vaunted French paperwork! All we had done was to replace a dilapidated wooden fence with a brick wall. When he showed us the cadastral plan of our property it appeared that our front window and half of our driveway did not, in fact, belong to us. He described it as a clerical error for which we would now incur the cost of the geo metrics redrawing of the boundaries and the notaire’s legal fees. I had visions of swinging a sledgehammer first and foremost at the notaire, then at Gerard and finally at the wall itself.

Having been in France for some years now we were aware of similar disputes over boundaries – but usually only from second-hand accounts. One of our acquaintances had had a run-in with his neighbour over the width of his new roof guttering. My wife was called in to act as translator but to thwart any attempts she might make to broker a truce the fiery farmer repeatedly reverted to his native Breton patois. He insisted with grandiose Gallic gestures that the guttering must be removed at once because it was “violating his space”. The fact that it now prevented rain water cascading off the roof on to his land and leaving it like a quagmire mattered little. The guttering was removed and the sacred space preserved. Boundaries had been defended and intruders repelled.

The sale of our house could not proceed without the wall impasse being resolved. Gerard suggested we ask our neighbours to sign over the tiny strip of land in an act of entente cordiale. If he felt any personal responsibility for the situation it was well concealed. Still his suggestion was worth a shot. But as I set out on my diplomatic mission to renegotiate the boundary between our two properties I was suddenly struck by an overwhelming and foreboding sense of history, of old battles and febrile grudges between Celts and Sassenachs. Here was I, an Englishman abroad, now about to open discussions on boundaries and land with the Scots. The irony and timing of the situation did little to embolden my heart.

I explained the situation emphasising the historic bureaucratic and geo-metrical errors and mildly chided the ineptitude of our respected immobiliers and notaires for not identifying the “clerical error” at the time of purchase. I couldn’t help think that had we been French this “oversight” would have come to light much sooner. Both remained as impassive as the wall itself. To be fair, from their viewpoint, it did look like a prison cell block even with the lavender plants and hydrangea shrubs attempting to soften the penal harshness. Always the pessimist when it came to people and unexpected financial windfalls I braced myself to be hit hard with a hefty pecuniary demand.

We had hoped you would have had this side of the wall rendered,” she exclaimed

“If you want it rendered then,” I replied, “I’ll get some quotes.”

We spent the following week pursuing quotes but nobody seemed interested in taking on the job. We told Gerard and he seemed unconcerned. He said that no one would render the wall because when patches of plaster fell off – as it invariably does – it would look worse. The best option was to paint it – a cheaper option too. This was realpolitik at its finest. So I set off on my second diplomatic mission. “How about having the wall painted” I suggested

“With French paint?” she scoffed.

“No. I would only use English paint, Sandtex masonry paint” I assured her.

“What colour?” She enquired.

“You choose.” I replied.

“Not white.” she exclaimed.

“How about Cornish cream?” I suggested.

I whipped out my tablet from the diplomatic man-bag and showed them the colour chart.

And then, I meekly proffered the letter, written by Gerard, which they were required to sign in order to hand over officially the strip of land. Both did so without a moment’s hesitation. I was astounded – and a tad ashamed – by their sheer kindness and goodwill. Their only concern was whether or not the wall would be painted before their guests arrived the following week. I assured them that it would be done by then. The only problem that now remained was how to get my hands on the paint. I feared that this resolution might well incur more costs than rendering the wall and I envisaged a mad dash to the nearest B&Q on the other side of Le Manche.

Looking for a less frantic solution I headed off to my scared space and refuge – the shed and gathered together all the dregs of the various colour schemes displayed now and then throughout the house. If only I had recommended a striped or multi-coloured wall! In fact, perverse though it sounds, I did have the colours to paint a Scottish saltire on the wall!

We had just planned my paint relay when, out of the blue, some old friends asked if they could drop in on us for a few days. Of course… as long as you bring with you a 20 litre tub of Cornish cream masonry paint!