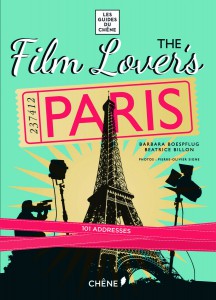 The brainchild of two film experts who dedicated a year to its creation, this is the essential cinéphile’s handbook to Paris. Their aim: to list the locations and addresses of 101 movies filmed in Paris, along with details of the scene set there, some movie trivia for good measure, and some gorgeous photography to boot. Organised into chapters by arrondissement, each begins with a map clearly marking out the cinematic highlights of the area. The range of locations is so varied that you could structure a whole city break around a cinematic trail of Paris. Retrace the footsteps of your favourite protagonists – sink your fingertips into a sack of beans outside Amélie’s grocery store, or imagine a different version of the Occupation in the café where Mélanie Laurent sips an apéro in Inglourious Basterds… Slim enough to slip into a small travel bag, this is your key to the hidden side of the City of Light that has until now been trapped behind the silver screen. ★★★★★