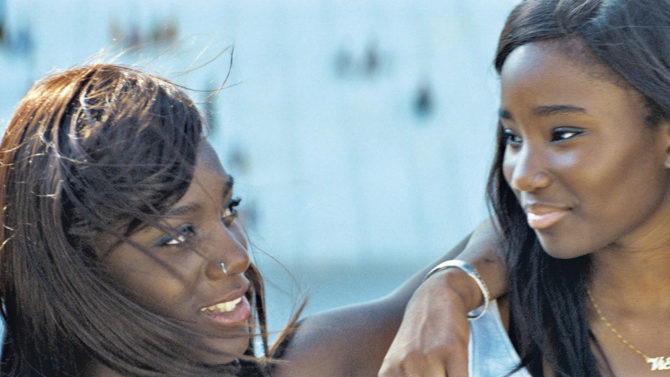 If I was to ask you to sit with me and watch a two-hour film about a gang of 16-year-old girls (the film’s French title is Bande de Filles) as they go through typical teenage ups and downs, domestic tribulations, romantic excursions and brushes with local wrong ‘uns in a down-at-heel cité estate on the outskirts of Paris, you might head for the door, fearful of a grim time. How wrong you’d be, as Céline Sciamma’s third film depicting young females while they’re growing up is packed with beautiful moments.

Marieme is our protagonist, a student who achieves low grades and appears to be drifting idly along. She’s shy, unassuming and lives in a tiny flat with her sweet younger sisters, whom she dotes on and cares for when her mother’s out working to make ends meet, as well as an a overbearingly protective older brother. However, her small world changes forever when she’s ingratiated into a tight group of three very charismatic friends who, at first, treat her with suspicion and, eventually, sisterly love.

It’s a beautiful study of a young woman’s tentative steps into adulthood, blossoming confidence and lessons in the school of hard knocks. Karidja Touré turns in a bravura perfomance as Marieme – at turns heart-breakingly vulnerable and fiercely rash, it’s a wonderful piece of acting from a virtual beginner. The film (and soundtrack by Para One) will live long in your memory and perhaps change any preconceptions of the lives being led in Paris’s grittier immigrant outposts.