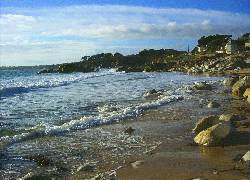 I set foot in a fog-shrouded Audierne one afternoon in early June 2001, peering through the mist at the masts of the small fishing and leisure craft in the pretty harbour. My friend had the address of an estate agent in the town as she was thinking of buying a house in the area and she’d asked me to accompany her.

I’d had holidays in France during the 70s, my daughter’s godmother is French, and I’ve always loved the fishing ports of Brittany. It was very exciting to be in France and I hadn’t realised how I’d missed it over the years. Damp with mist I wandered along the Quai into the bookshop (librairie) opening a watercolour sketchbook at the page of the Avenue Lambert. My mother’s maiden name was Lambert and something stirred in me at that moment, even if it was only a coincidence.

My friend and I spent three nights at the hotel Roi de Gradlon over looking the beach, hearing the sea roll in and out all night: I knew then I wanted to stay.

For personal reasons I had been looking for a small house in the UK and almost bought one in Northumberland, my birthplace, and then in Cornwall – but neither felt quite right. This was an important time in my life. I needed to have space and time to myself to develop my poetry and writing: I wanted ‘a room of my own’ where I could entertain my friends and have them to stay. Living in an inland county for 25 years I had also missed the sea, particularly the breezes.

Having by accident stepped into Audierne I decided to return by myself four months later to explore the area. It didn’t feel lonely but it wasn’t it easy to do this alone either: it was a challenge and I had a growing sense of satisfaction.

‘The estate agent thought I was mad!’

Travelling the world with my job, I have always enjoyed European life and being alone. So staying at the same hotel I’d stayed in previously, I explored the area. I walked from Audierne along the cliffs to Pors Poulan; from the hotel to Esquibien and along the cliff path toward the Pont du Raz; from the quai to the church looking out over the bay; and from Audierne up the Goyen river to Pont Croix. The estate agent thought I was quite mad.

Driving to the Pont du Raz, drinking in the coastline, walking between rocky promontories atmospheric with sea-faring souls over the centuries, I was feeling more and more interested in the area. I turned down to the Bai de Trespasse and for a moment believed I was in the Scottish highlands – stunned by the beauty of the shining bay lying before me and luring me down to its shores. I marked the map as I travelled on foot so I could see how much of the area I had covered. Next I drove south to Pont Aven, then Concarneau, then Quimper.

The fog had given way to rain: it rained to the tune of howling gales every day, and I loved it. With the help of the estate agent, who recognised immediately my preferred style of house and décor, I found my house: a run-down fisherman’s house in Plouhinec five minutes from the harbour and cliff path as well as the picturesque church.

The estate agent was supportive and helpful, allowing me to believe that buying a house in a foreign country was a completely normal thing for a lone middle-aged English woman to do. He was gentle and kind, advising professionally about the legal process of buying a house in France. It was as though he had an invisible arm around my shoulder and there was never any pressure or hard sell.

I lunched in the Café du Quai, where from that day to this I have been welcomed and looked after by the proprietor himself. He has never once made me feel uncomfortable about being an Englishwoman alone in Audierne. In fact my solitary status has only been mentioned once: by an Englishman living in France. He thought, as I had a friend staying with me at the time, that I must be a lesbian or at the very least a bi-sexual: the French are perhaps, more discreet!

Yet beneath my false confidence I was terrified of the decision I was about to make. My rising panic drove me to walk from the house along a back road to see where it led. It took me down to the sea and I came back along the cliff path up past the church to what could become my own front door.

And, by chance I walked into the most spectacular sunset. I stood on the bridge between Audierne and Plouhinec and watched as the sun slipped stunningly, silently, over the horizon in a blood-orange sky.

As I watched it slide from view I decided to take the risk of my life and buy the house. I have not regretted my decision and my family, including my four- year old grandson, my friends from all over the world, love the house and the area: both have brought us all much pleasure and fun.

I rent the house out in the summer and my guests love it too, with some returning for a second time. Audierne is now on the world map. Another set of Australian friends revived their broken marriage after a month in the house and this morning I have received an email from them to say the magic is still working. Another artist friend photographed scenes and wildlife in the area, developing these as unique contemporary artworks now showcasing Brittany on every wall of the house.

Is it only fantasy that this was the land of my maternal and paternal forefathers? Who knows, but I ‘feel’ the land. Landscape and memory are irrevocably linked for me. Perhaps my genealogical long distant unconscious memory spoke to me that evening in the sun on Audierne bridge, though some of my friends, including my husband, thought I had gone mad.

Or perhaps my Celtic and Gallic ancestors led me. I am certain that the Celtic landscape, so like my Northumbrian home and coastline, and that of my Welsh ancestors, as well as my beloved Cornwall magically conspired to settle me in a place I love and gave me the courage to do it alone.

It hasn’t been easy. The house needed a lot of work and I didn’t have a lot of money. There were days during my first summer when I wondered why I had made such a decision but they were momentary: they passed as I walked on the headland and watched the glittering brilliant diamond Atlantic: it made me feel so, so rich in every way. Sitting on the rocks, looking at the distant golden beaches, I became a millionaire.