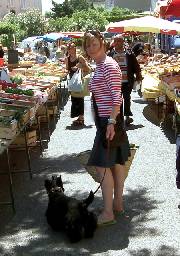 I have a friend who lives outside St Remy in Provence and whom I have visited often. About four years ago on a balmy night, I was musing, over a glass of wine, on how nice it would be to buy a house nearby, not for a minute thinking I could afford anything. Provence, I thought, was for pop stars and shopping-chain magnates.

‘Look in Tarascon and Beaucaire,’ my friend said. ‘You can still find something affordable there.’

Tarascon and Beaucaire stand on opposite sides of the Rhone, and their castles have been glaring across the river at each other since the early Middle Ages when they were both important trading towns. The bridge between the two provided the gateway to Provence from the Languedoc and it has long been an important crossroad for travellers and traders.

Beaucaire has very grand houses, built by the rich merchants who once lived there and Tarascon, once part of the Holy Roman Empire, has many buildings dating back to that time.
Now both towns have a large immigrant population, mainly Moroccans and Algerians, as well as Gypsies. And it is for this reason that a house in Tarascon will cost a third of the price of a similar house in St Remy even though it is only 12 kilometres away. And so not long ago, my husband Julien and I bought a house here.

English people generally don’t know Tarascon, and French people are surprised that we live here rather than in a more traditionally English populated town. They also presume that English people wouldn’t want to live in this kind of community, probably because they wouldn’t. However there is a lot of building and renovating work going on, so people are recognising that ideas are changing.

The French in general are suspicious of the Gypsies. But living in the community, we feel they know us and take care if us. There is quite a lot of prejudice against the Moroccans, especially against the youth, who people believe are involved in drug dealing – and they probably are; but which rural town does not have this problem? During the riots all over France last year, nothing happened in Tarascon. The Moroccans don’t talk about what it’s like for them living here, and they live quite tightly within their own community.

But Julien and I have been truly welcomed into . The same day as I got the keys to my house, I met my neighbours. I was having trouble opening the door to my house and Hamoumi, who lives opposite with his wife Batoula, and their four children, came to introduce himself and to see if he could help. Another neighbour, who lives with his parents, Pincette and Rosine, whose family are Gypsies, also came to see if he could help. Together, armed with WD40 and a screw-driver, they managed to get the door open.

Since that day, my husband and I have been treated like one of the community by everyone in the street. Any time we have a problem, there is always someone on hand to help; whether it is unloading beds or telling us when to put out our rubbish, helping with the painting and decorating or fixing a plumbing problem.

Within the first week that we were in the house, Batoula asked if we liked couscous and duly came round with a big bowl of it for our lunch. In the summer she is constantly going round the houses with glasses of mint tea and cake. Henri, who is French and lives next door to her, every so often drops round a bottle of wine for us to taste from his cave. The other day Pincette brought round a lettuce for us. When I thanked him, he said there was nothing to thank him for; it was perfectly normal, he said for everyone to share what they had. His wife often drops round treats for our two Scottie dogs.

The ‘family’ is very much at the core of this street and we have been truly incorporated into the ‘family’ without question or suspicion. It is reminiscent of a small rural town in England in the fifties, with children playing in the street and everybody sitting outside their houses in the summer evenings. Everybody always greets each other and everybody helps each other out.

I enjoy cooking, and for me, one of the great highlights of my life in Tarascon is going to the market on a Tuesday, and I buy almost all my groceries there. As well as having many excellent French stalls selling fresh meat, fish, saussisons, cheese and vegetables, all the usual produce of a French market; we also have the Moroccan stalls. Any time of the year you can get large bunches of mint, parsely and coriander, as well as Moroccan bread and sticky pastries. You can also get all sorts of dry goods, a variety of spices, dried pulses, dates and nuts; everything you would need to make a couscous or a curry.

At night the streets of Tarascon are quiet. The Moroccans are Muslim and don’t drink or go out at night. The Gypsies however are Catholic and like nothing more than to drink and sing throughout the night. Most of this happens round the corner from us in the Bar de Loisirs. It is owned by five brothers who are reputed to be cousins of the band ‘Gypsy Kings’, who came from Arles. Most nights, especially on weekends, you can hear the sounds of the Flamenco guitar, singing and clapping into the early hours.

In the summer a barbeque grill is set up and you can get a simple lunch of grilled meat or fish with bread and salad served under the shade of the tall plain trees.

Once a year, they have a three day fête, centred around a temporary stage with live bands. Last year the Gypsy Kings played, there were at least two of the original members, the rest of the band (about 20 in total) were made up of nieces, nephews and other members continuing in the family tradition.

Easter in Tarascon heralds the beginning of the year’s fêtes and celebrations. The most colourful and theatrical being when the Gardiens, or Gauchos, from the Camargue come to town on their white horses. Barriers go up and when the time comes, five or six horsemen gallop through the streets at full speed with a bull running between them. Teams of young men try to stop the bull, dragging it by its horns and tail. The colour of the mens’ shirts, the bulls and the horses in the heat, coupled with plenty of Pastis, makes for a truly unique experience.

Life in Tarascon is more than just living in France with a French culture. We like living here because it is a working town, not a tourist destination, with people living real lives against a multi-cultural background. It is a richer and more varied life, somewhere between Marrakech and Barcelona.

But don’t tell anyone. We rather enjoy being the only Brits in town.

Angela Billows is a Costume Designer and her husband Julian Paltenghi is a painter.