Liz invites us to reconnect with the arts 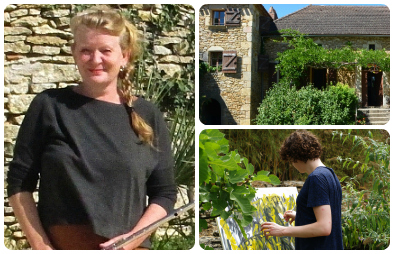 I always loved making music in my youth, playing flute in various groups and orchestras in Cambridge. I studied flute at the Royal College of Music but the joy of playing was mostly replaced with fear of error once I was on the path to being a professional. I played and taught for a few years, but I didn’t feel ‘cut out’ for it and switched careers, retraining in computing. It was liberating. It was exciting to learn and use new skills and I was able to enjoy my music making much more now that it was not my “job”.

I met my husband, David, when we were both playing in the Cambridge Philharmonic Orchestra in the ’80s. David plays viola and although he studied Physics at Bristol he had spent most of his time playing music at university and his first jobs were in arts administration. He took an MBA in the ’70s and worked as Strategic planner in Cambridge Electronic Industries for a few years. He has worked in Television technology for the past 25 years and runs his own business.

Lotte, our eldest, graduated from Cambridge in astrophysics last year. She is currently in India where she has been helping at a charity music school. She will do an MSc in Computer Science at University College London next year. Lotte plays violin, piano and accordion. This summer she will spend some time as a helper at Cubertou and also help on the Camden Youth Orchestra tour in Germany. Bea is in her second year at the University of East Anglia studying business and management. Bea plays the bassoon and viola. She is a wonderful cook and will be helping a lot with Cubertou as well as playing her bassoon. 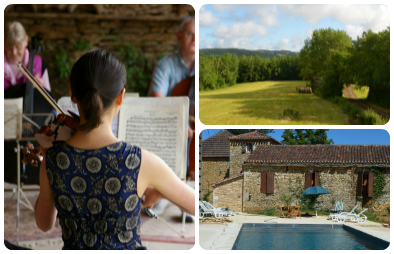 And then we came to France

My daughter Bea and I attended a music course at Cubertou. At that time I had a dream that I’d like to buy somewhere in France. I used to holiday in France with my French exchange, also camped here as a child and later with my own children. That glorious drive from Bergerac to Cubertou, having the most wonderful week there , visiting the Chateau de Bonaguil and enjoying a day in Bergerac resulted in me falling in love with the area. Everything looked beautiful to the last little barn. When I arrived back in London David could sense that I’d left a part of my heart in South West France. He allowed me to persuade him that our eventual dream place, where we could spend time with family and friends and run occasional courses, should be in the Dordogne-Lot area.

The seed of an idea

I’d always loved the cello so I joined an orchestra for ‘late starter’ adults. It is so rejuvenating to learn new skills, I had the same joy I had felt playing flute as a youngster. Coincidentally, the music teacher at our daughters’ school gave a presentation to parents to demonstrate that all the parents who had played instruments in their youth but had stopped, regretted it. She meant it for parents to encourage their children, but it made me realize that it was just as worthwhile to encourage adults to take up new skills and not just to think that it’s too late and live with the regret. I remember telling friends that I would love to do something to contribute to the offerings for adult ‘late starters and re-starters’, although at the time I was working flat out as a software engineer. I started attending some wonderful music summer courses. The weeks spent at these courses were the happiest of my year and I realised that what I would really like to do is run holiday courses for adults somewhere idyllic. 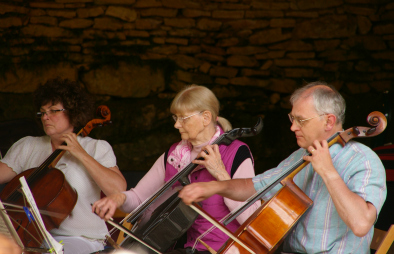 The original plan was to buy somewhere lovely in the Dordogne-Lot area in a few years time to coincide with David’s retirement. Things happened slightly differently. I went on a summer course at Cubertou with my daughter, and this time David joined me at the end of the course for the performance. He shared my enthusiasm for the place. We were packing up to leave when the owners of Cubertou arrived to collect keys and lock up for the winter. Cubertou had been a thriving Arts Centre in the past, but was now being occupied for only two or three weeks per year as holiday lets. The conversation led to a guided tour of Cubertou and we all agreed that it should be a place filled to the brim with creativity and laughter… six weeks later we were back in France signing the purchase agreement! David and I bought Cubertou in December 2011 and I ran our first courses in the summer of 2012.

The practicalities of starting a business

For us the French way of having a notaire represent both vendor and buyer worked extremely well. We became friends with the vendors and included in our agreement that they would help us to get going in our new venture. Having them share their knowledge of the property, the various French administrative hurdles and the help with the language was invaluable. Another thing we found very useful was to read books like Live & Work in France by Victoria Pybus and Jack Sims, and magazines such as French Entree. Anyone starting a business needs someone who knows the ropes in France and who speaks the language to help them get started. Not everything was easy, of course. There is the mighty challenge of the language for one thing, in those moments when you realize you’re not sure if something that arrived in the post is an actual bill or a scam. Another adjustment is getting used to shops shutting on Sundays, even garden centres and DIY. And bureaucracy, getting so many bills for so many different taxes and trying to understand it all.

While chatting and signing our property purchase agreement we made conversation around the rather strange laws of inheritance, and that David and I should get married in France. The notaire picked up on this and said he would be happy to preside over the relevant french marriage vows. So David and I found ourselves having a mini French marriage, just a few weeks before our silver wedding anniversary. And as if that wasn’t surreal enough, the date of our French marriage coincided with a visit to Cubertou of William Bennett, probably the most popular flute maestro of our time. So I found myself having a marriage ceremony with the man I had been very happily married to for 25 years and with my flute ‘hero’ attending as best man… wonderful!

Again not as planned, I stopped working for the business much earlier than expected and now work full time on courses for Cubertou. I divide my time between here and London, sorting out accounts for the previous year, planning courses for the next year, promoting and taking bookings.

Another unexpected bonus is that our market is much broader than originally planned. Many of the courses are not just for beginners but also for those with more experience. Last year we had a number of guests who work with the arts professionally, as teachers or therapists, who very much enjoyed the opportunity to have a week of creativity doing their own work. 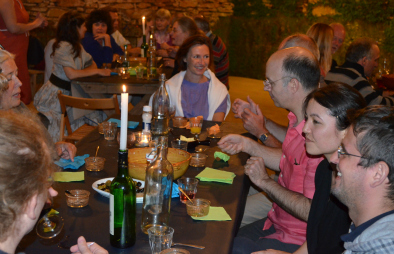 What I love about France

The space, the countryside and the riches it brings to our table and the space we can afford our clients. Having space relaxes people. Also that there doesn’t appear to be the snobbery that we still come across in other places. We were greeted by the mayor of a local French village with his mop and bucket, the director of a nearby major tourist attraction also sells tickets in the booth, I love that sense of everyone ‘mucking in’ together. Finally, the beauty. A mixture of sunshine, wild flowers, 13th century villages… what more could you ask for?

•With thanks to Liz Cutts
www.cubertou.com

Previous Article 5 Questions: The Brubackers. A renovation project in the Dordogne.
Next Article What Do You Love about France? Get Published