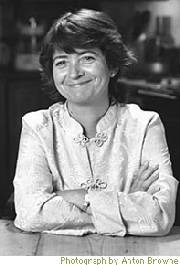 Although today I paint and cook, I started with food. Desperate to leave an unhappy home and too young to go to art school, I began my career as a waitress in a London restaurant called Spot 111. It was full of stars of film and theatre. One night at a table were Nathalie Wood, Robert Wagner, Laurence Olivier and Lauren Bacall, who I managed to pour wine over – I was nervous! I also waitressed at Langan’s Brasserie where the chef refused to serve Bianca Jagger scrambled eggs.

I was almost 15 and as far as my father was concerned, my young life was going downhill rapidly, so he suggested I work as an apprentice chef in Switzerland. So off I went – it was my first time abroad. I enjoyed the training and enhanced my already rich vocabulary of swear words, which for a young female trainee chef in a male dominated world was of the utmost importance.

Once it was finished, I returned to England and finally to Art School but it didn’t really give me any joy. Unhappy, I once again turned back to catering, taking on a succession of jobs, at The Howard Arms in Warwickshire, The General Trading Company and finally The Watermill Theatre in Newbury. There, I fell in love with a young wine merchant called Adam and life seemed almost perfect, especially when Adam asked me to marry him. A few years later, though, I was brutally dumped, cheated on and left out in the cold.

Broken hearted, I fled to France. I landed at Nice Airport with just 100 francs in my pocket, brave and daft at the same time. I took a bus to Antibes and did the trail of Crew Recruitment Agencies and managed to get a job as a chef on board a motor yacht where a young, high class escort woman who had nabbed a rich old man treated all of the staff with the kind of rudeness and cruelty I had yet to encounter.

I skipped ship the moment we docked in Monaco and went to St Tropez where I found myself a job as head chef in a beach restaurant in Port Grimaud. It was another disaster. The Mistral blew, sand landed in the food, the second chef disappeared and the washer-upper drowned himself daily in a vat of alcohol. The owner was so busy with his other restaurant that he would forget my deliveries. I left as soon I was offered another job – this time on a boat sailing around the world. This time, I fell in love with the captain.

We sailed to the Caribbean every winter and to the Med every summer, where our boat was based in Menton. The captain and I bought a house together in the mountain top village of St Agnes. After five years on a boat and five years of living with a typical sailor – I could take no more. I ran from the boat and the man, and bought his part of the house.

So here I was in France with my own house and for the first time in my life, I took time off work. I tried to write a cookery book but it didn’t work for me, so I started to cook again, this time privately, taking the odd villa job here and there.


‘Falling in love with art again’

By now it was 1993 and I started to be interested in art again. I went to the Centre d’Art Vaas in Vence to offer to cater at its recitals but ended up taking art classes. Years of pent up painting and creativity poured out of me. I sold my house, moved to Vence, stopped cooking and just painted. I went back to London to Art School, but then miseries of miseries, my money ran dry. I could not do a degree course, I could not stay in London, I had to work.

Back in France and set myself up in Valbonne, luckily having good friends in the yachting world and the villa rentals, I soon found work and was on my feet again. By 2002 I had my first major solo exhibition in Valbonne, which went very well and then in the autumn of that year at the Tricycle Theatre Gallery in London.

So today, I chef in the summer and in the winter I paint and show at exhibitions in the spring and autumn.


I had a terrible time believing that it was possible to be a chef and an artist. I felt they did not go hand in hand until Bernard Owen, who used to be the director of the prestigious Slade School of Art, told me how he gives lectures on painting and cooking at the same time. Well, a man who has paintings at the National Gallery in London, must know something I thought.

In fact, the two are similar in many ways. For me it is all about the senses, about vision and colour and smell and teasing the taste buds and flirting with people’s thoughts and hoping I can evoke an emotion in people both from my food and with my art. I want a person to feel, quite simply feel. I love seeing people become elated as they eat something good, something sensuous. I love Mediterranean food, spicy colourful, fresh, healthy… put some Asian in there and the palette is bound for joy.

Today, finally I am happy. France suits me. I suffer from SAD and need the sun so England does not suit my well-being. I love the markets in France, the smells, the whole way of life. I love taking my panier and walking from stall to stalls, poulet roti wafting though the air, along with goats cheese and herbes de provence, lavender fields, yellow butterflies.

I love the fact that there is still a community feeling in France, which is greatly lacking in England. In St Agnes, when a family go to lunch on Sunday the it’s everyone from new born to almost in the grave. I live in the middle of Provence in a pink farmhouse surrounded by vineyards and I am inspired by nature and all that surrounds me. What can I say, I am in love with the south of France.