After many happy years living near Chantilly, and with her children having flown the nest, Clare Howarth set about renovating a neglected outbuilding to create a wonderful guest house.

What brought you here?

We bought our house as a family home. I was a fashion designer. I was working with Vivian Westwood in London and helped her with her first show in Paris. Me and my late husband Carlos, who was from Chile, decided to stay here with our children, who are now 24 and 26. We came to Chantilly every weekend because of our horses – it’s like the French equivalent of Newmarket here. It made sense to move here while the kids were small, so we bought this property, which was built in the 18th century and extended in 1900, and planted a garden.

What made you decide to renovate and create l’Atelier?

As the children grew up and started leaving I thought, right, let’s try to do something else. We restored the two guest rooms in the main house, added bathrooms and opened for guests in 2016. It was the start of a new career. We also had an unused building on the grounds, which probably dates from the 1900s. It was used as stables but I didn’t want our horses here – we preferred to stable them elsewhere – so we just used it as storage. The children would play up in the hayloft when they were little. I had this idea that we could add two more rooms and turn this building into a guest house, autonomous from the house. That’s how the idea for L’Atelier was born.

How long did the renovation take?

We opened in 2019 and I think it had taken us a little over two years. Carlos had a team of trusted artisans from his building business, mostly restoring Parisian apartments. We’d get the guys out to work for one or two days on L’Atelier between jobs.

How did you approach the renovation?

L’Atelier is basically one big loft, with an independent entrance on the ground floor. So the idea was to keep that sense of airiness and feeling of calm. The spaces are great and I won’t say minimalist because it’s warmer than that. You know, a lot of people who live in tiny apartments try to create a calm, empty space, but it’s hard to manage. The beauty of L’Atelier is its nature as a guest house, which means we didn’t need set aside any storage space, so we could use all of it for the guests.

Did you set a budget for the project?

No, we didn’t. We threw in what we could, where we could. I have never worked out exactly how much it cost, mostly because we were using artisans from our team, and it’s almost impossible to evaluate that sort of work. It’s hard to calculate the cost of materials too. Because it was a space basically suspended in the middle of nowhere, the installation work was pretty heavy: three layers of insulation on the floor, in the ceiling and in between beams, plus opening a new window. There was quite a bit of upcycling and reusing. We were quite clever with the kitchen. All I could afford for it was a couple of sheets of plywood. So I went and got some really pretty ones where the grains mixed well and then with what was left, I built a platform on the wall for plants. A board over the drawers in the bedrooms and bedside tables was made from screens that we used for a Cerruti window display that I managed to hang on to. It was a lot of fun seeing it all take shape.

What was your inspiration for the interior?

As a designer, I’m constantly keeping up with trends in fashion, and that extends to architecture and interiors. In fact, since I finished the guest house, I’ve been asked to do projects in various other areas. I’d say this style is modern-rustic. I start from a mood board, a global concept and then just let it flow. I get a sense of the light and the materials and collect elements that fit into that notion. The polished concrete on a lot of the walls, in the kitchen and bathroom, was left over from Carlos’ jobs, but the pink in the bathroom, I actually did order. I don’t usually like to do things that are too on trend, because nothing becomes outdated faster than new. Throughout my career, I became very good at sidestepping trends, and as a result made some great finds along the way, like the big slab of wood I had been saving for ages. My Dad installed it to form the window ledge in the living space, which you can use to put your feet up on while you’re sitting in one of the two Sigurd Ressell Falcon chairs and enjoying the views of the garden. It’s absolutely divine and works brilliantly well.

Is that your favourite spot?

I love it all, actually, because I worked around every problem, turned it around and around, upside down and inside out until I knew it was right! I love, love, love the bathroom too. The overall effect of this space is very calm and peaceful, looking out over the garden. You get a wonderful connection with nature. There’s a cypress where you can see birds’ nests and swallows coming in and out under the eaves. Guests tell me that they can feel this connection too. We’ve been full ever since we opened – even during the pandemic – as people from Paris were seeking peace and quiet and space, and we are just a little over an hour away, while by train it’s just 24 minutes.

Tell me a little about the area…

There’s quite a big British population here – even an English school. The centrepiece is, of course, the magnificent Château de Chantilly. The Prince de Condé built the Great Stables there in the 18th century. It was a statement, the equivalent of a superyacht today probably, or sending a rocket into space. They used to raise hundreds of dogs for the hunt, the grounds were so good. Then the English trainers arrived. There are now seven golf courses and a hippodrome and it became an equestrian capital, with polo and everything related to horses, so the tradition continues.

You were already fluent in French, so obviously the language was not an obstacle for you…

That’s right. But it’s the same with renovating a property in any foreign country. It can be a nightmare if you’ve just arrived and you don’t understand what’s going on.

What was the most nerve-wracking part of the process?

Sadly, the rush to get it finished. After a long illness, my husband Carlos passed away two weeks before we were due to receive our first guests. I really had to get it done because they were travel bloggers and it was important for publicity. We all just soldiered on and it turned out to be the best thing we could have done. It was much better than being overtaken by grief.

And what was the best day?

I think the best day was when they rolled out the concrete floor and opened up the window. That was one of the times when we could suddenly see the project starting to come together. 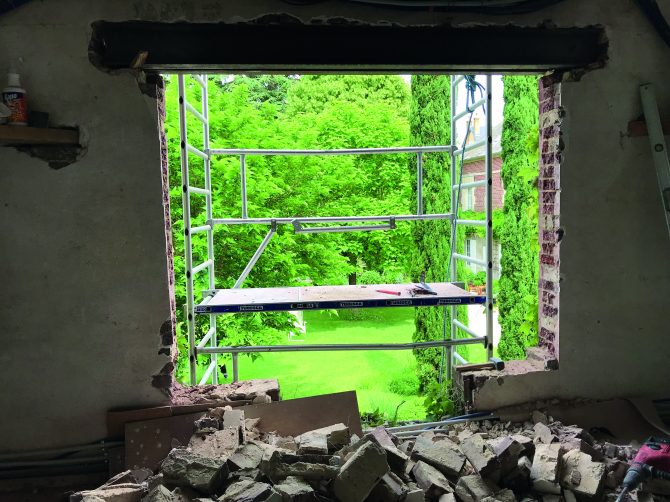 With what you know now, would you have done anything differently?

I’m really happy with it actually. I’m a designer, so it’s my logic to just thrash things through, to get the absolute, perfect solution on everything. I’m like a dog with a bone. With a budget, there’s always some restriction, which helps in a way. One thing I did change though, was that initially I was convinced it should sleep four people. Before I opened, a friend came by with her two boys, aged six and eight. She said to me, ‘Clare, you don’t want more than two people in here.’ She was right, so I changed it to a double-occupancy guest house, which allows people to better appreciate the tranquility of the space. That was a change for the best.

Looking to buy in Oise?

Situated 35km north of Paris, tourists come to Oise for its lush countryside, forests and rivers, historic monuments – such as the châteaux at Chantilly and Compiegne –and theme parks (Parc Asterix is the biggest). Its capital is Beauvais and regional specialities include mushrooms, berries and fi sh.

Browse our properties in Oise