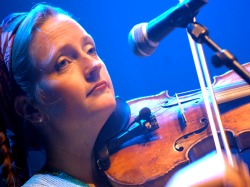 Sophie Read performs as one half of Paris-Londres – the musical duo that performs in front of the cathedral in Sarlat. Fifteen years ago, Sophie completed her masters at Sussex University in Brighton and moved to Paris on a whim… that and the feeling that there was something waiting for her there. Read on to find out who or what it was and how she arrived en Dordogne.

Low on savings, I decided to busk in the Paris metro to make ends meet. I’d started the violin when I was eight years old and had played in all sorts of venues, from the Kennedy Center stage in Washington DC to the metro in NYC while I was a student at Columbia University. I knew that busking alone as a woman was a complicated business, even dangerous at times.

So I decided to find a partner to play with and came across Bruno Vatys one day at the Champs Elysée metro stop. That was February 1996. I adored his guitar playing, his style of composition and asked if he wanted to jam together – he said yes and we’ve been playing professionally together ever since! We called our duo Paris-Londres, as he’s from Paris and I’m from London.

Our different identities, personally – as well as musically – are very important. I bring a Celtic and at times Country sound to the violin. Bruno provides songs in the typical ‘chanson française’ style where the text prevails. It makes for a good mix!

After meeting in the metro, Bruno and I set off from Paris almost immediately. Bruno was 23 and I was 25. What followed was a very Bonnie and Clyde type existence with us busking by day in different French towns (Chartres, Poitiers, Nantes, Limoges…), sleeping in the car or crashing with friends and always, always playing and composing on the violin and guitar.

We were on our way to Nice when we came through Sarlat by chance in June 1996. The tourist season was just starting and we fell in love with the medieval city and the folk that inhabit it. We started playing in the streets and were invited by pubs and cafés to do concerts. We brought out our first album in November ‘96 (Confidentiel) and have produced eight others! 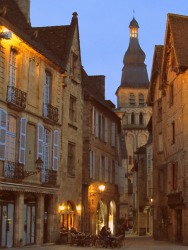 In May 2011, Paris-Londres celebrates its 15th anniversary with a double album, a compilation of our 30 most popular songs. I would describe our sound as ‘electric folk’. Over the years, we’ve developed a style we like to think of as our own – a mix of Bob Dylan, The Corrs, Dire Straits and Moby. We only ever perform as a duo, though guest artists feature on our albums.

These are either instrumental or vocal in ambiance. We also produced a children’s book with CD in 2010 (we are hoping to find a publisher for the English version). A new vocal album is planned for 2012 as well as a novel I’ve written, inspired by our story (in French). People are surprised to learn we have neither producer nor distributor outside of ourselves.

We perform mainly in Sarlat now – people come specifically to see us. We tour a bit in France, but never in the summer, when we play exclusively in Sarlat. I still adore the Dordogne. The countryside is stunning and I appreciate the ‘humane’ pace of life – the good fresh bread, the local cafés, the simple greetings of passers by on the street.

I don’t feel particularly French, though my husband and sons are French. Occasionally I miss England and the other countries where I’ve lived (USA and Poland). However, I no longer feel English. My friends tend to be French, as I’m well integrated in the local community. From the UK my sisters and good friend Katherine remain close to me and I visit them regularly.

For the moment, I can’t imagine living anywhere else. I feel privileged to be able to immerse myself in music, good food and wine. Making one’s living as an artist has never been easy but the good times still outweigh the bad… my instincts still say to me ‘Sophie, stay put!’

Find Paris-Londres in Sarlat on the following days:

– Saturday in front of the Tourist Office at 11am

– Wednesday in front of the Cathedral at 11am

– June and September in front of the Cathedral at 11am, 2pm and occasionally 9pm

– July and August in front of the Tourist Office, 9pm

You can also listen to Paris-Londres and buy CDs online.