The Seine Side of Life 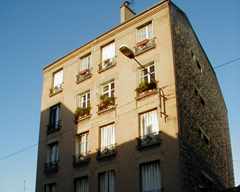 It was Dennis’ fault really, though hindsight has proved it to be a stroke of genius…

I had recently taken early retirement from my teaching career, following an emotional breakdown that had left me in hospital for several months. On my return to the “Real World”, our daughter Nikki invited me to spend a couple of weeks in Paris with her, where she was cat-sitting in a friend’s apartment. Nikki had gone to Paris at the turn of the millennium, convinced she could make a living there. And she’d done well, getting a job and making a network of friends in the city. But she didn’t have a permanent roof over her head and hopped from one friend’s apartment to another.

I was in the toilet of a Parisian bar when my husband Dennis phoned me. Perched precariously over one of those “hole-in-the-ground” loos I heard him suggest that we spend our retirement lump sums (he’d also just retired from teaching) on a small apartment in Paris. That way, he said, Nikki could have a roof over her head, and we’d have a pied-à-terre in a very exciting city, with Nikki as resident caretaker. My response to his suggestion could politely be described as scathing…

By the end of my fortnight stay I had put the statutory ten percent deposit on a tiny, thirty-square metre patch of space on the third floor of an aged building, spurred on by Nikki’s enthusiasm for her dad’s suggestion, which I’d carelessly let slip to her. And when, three months later, I sat through the complex and incomprehensible ceremony in the notaire’s office, I became the proud if somewhat bewildered owner of my own slice of Paris.

Then reality hit me. I had managed to negotiate the tricky business of property purchase thanks to Nikki’s network of friends. But now, when I looked around, I saw that I’d bought a tiny, two-roomed shell of a place with bare wires hanging from the ceilings and protruding from the skirting boards, a water-heater that wouldn’t heat and a toilet that wouldn’t stop flushing. And as if this wasn’t enough, there was a gas leak in the tiny cubicle laughingly referred to as the kitchen and access to the apartment was by way of a narrow, twisty staircase up which any furniture and appliances I bought would have to be manoeuvred.

Dennis, very much a home bird, had been happy to leave everything to me and was due to join me a week later. Somehow I had to turn this miniature nightmare of a place into a desirable, habitable residence. Another breakdown loomed…

It was about that time that I decided to start keeping notes, the idea being that if I ever survived this there was a lively book to be written. And looking at the whole venture as a challenge rather than a problem or disaster, I set about finding ways and means to get things done. The very kind proprietaire of a nearby bar recommended a reliable plumber prepared to do jobs at a realistic price, I located a branch of Ikea, whose flat-pack furniture would go up the stairs and found that many Parisian stores cater specifically for the needs of small apartments, as you’d expect them to, so buying a fridge-freezer, cooker and washing machine to fit my kitchenette was easier than I’d anticipated.

Written like that it all seems so simple now. But my notes tell a different story and by the time Dennis arrived to find a fait accompli I was exhausted by all the setbacks and challenges I’d had to overcome. But I had overcome them and felt proud of my efforts. I’d even developed my grasp of the French language, unused since I was nanny to a French family thirty years earlier. 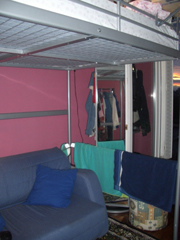 Dennis, whilst liking the look of the apartment, was at first taken aback by its size (or rather its lack of size) and even more so by my space-saving sleeping arrangement, which consisted of a high-level bed known as a mezzanine, accessed by a ladder. As one who hates aeroplanes he found it too much like flying for comfort. But as we explored Paris he found much that appealed to him and two things really sparked him off. The first was the Métro system, which captivated him to the extent that he spent hours learning each line from end to end so that on the rare nights he suffers from insomnia he can pick on a line at random and recite all its stations in order. The other was what he likes to call the French Tart, which, thank goodness does not refer to a woman of easy virtue in Pigalle but is one of those delicious jellied, fruit-filled pastries the French do so well. These two aspects of the City of Light are enough to keep him coming back even if French cuisine and wine have failed to take root in his imagination – his favourite food being the extremely English chicken and chips!

During the first year we didn’t get to Paris much owing to Nikki’s tendency to stall us. It was only when she decided it was time to rent a place for herself that we found out why – she’d been subletting it and had had trouble getting her tenants to leave.

Following Nikki’s departure we decided to keep the apartment and to become frequent visitors to Paris. But one day we had a call from Nikki informing us that the agent who dealt the building on behalf of all the apartment owners (the coproprieté) had called her to tell her that water was pouring down onto the heads of the squatters occupying the apartment below ours and that a pipe must have burst. The firefighters had had to smash a window to get in.

The flood had caused havoc in our apartment, leaving in its wake soaked walls and twisted floorboards. Fortunately, we’d previously taken out insurance; even so, it took a year for the walls to dry out and the decorators to do their job and it was only by regularly harassing the insurance brokers that the job was eventually completed. We ended up with an apartment that looked new, painted in colours of our own choice instead of the plain white that had been there before. 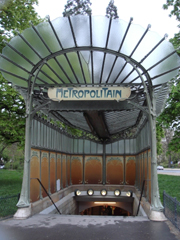 In the years since then we’ve spent many happy weeks in what Dennis refers to as our French Cupboard, exploring Paris and nearby cities such as Chartres and Rouen. Dennis’ initial semi-Francophobia has been replaced by admiration and enthusiasm for all things French (food and wine excepted). Many times we’ve unfolded a Métro map, stuck a pin in it at random and visited the nearest station to where it lands to use as a starting point for our explorations. This has led us to find places and sights we may otherwise not have seen, including a magnificent garden, complete with trees, lawns, tennis courts, toilets – all on the roof of a railway station, the Gare Montparnasse! Less impressive was the area of Picpus, though it did provide an interesting addition to my notebook. We arrived at this genteel part of the city at lunchtime and sought out a restaurant whose menu was not too upsetting for Dennis’ delicate tastes. We both decided on cheese omelettes, Dennis’ with the inevitable chips, mine with salad. But when the waitress arrived to take our order, she coolly informed us that we couldn’t possibly have omelettes because it was lunchtime and would take too long. We could have croques monsieur if we liked. This might once have unsettled us; now, we just laughed, left and found another restaurant. I added the incident to the growing list to be included in my book, which by now had a title, Going In Seine. This seemed appropriate given what was going into it.

And Going In Seine is now a going concern, of which the above is just a taster. Amongst its other highlights are the Frenchman from hell, who befriended us for a while but who managed to alienate even his own compatriots, the crowd of Japanese tourists who applauded me for successfully using one of the automated toilet cabins in Montmartre and the Avenue Gordon Bennett, home of the Roland Garros tennis club, France’s Wimbledon.

Our little apartment is for me a taste of Paradise and I can do no better than to finish this article with a brief extract from towards the end of my book:

“No matter how problematic life can be, this tiny haven of peace is a priceless refuge. No country mansion, palatial chateau or noble castle could give me such contentment. Never have I felt so gently enveloped, tenderly protected and quietly at home as within the walls of this little apartment.”

Going In Seine is published by Chipmunka Publishing and is available from Amazon and all good bookshops.