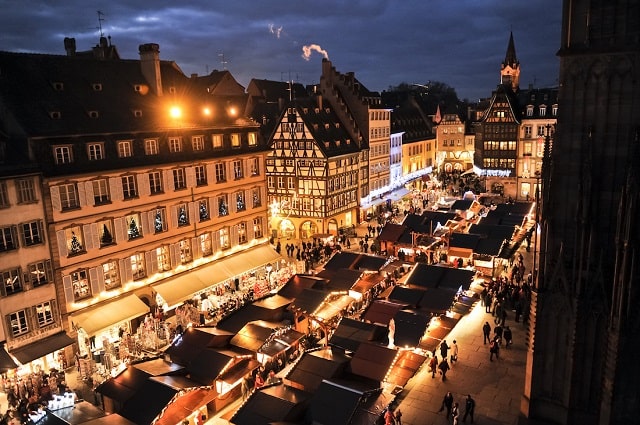 Christmas in France is a family holiday and an occasion for merrymaking and gathering around the table, marked by traditions that have become popular in many countries across the world, including the Christmas feast called the Réveillon, Christmas trees, and nativity crèches. Strasbourg is known as the home of Christmas markets, Lille for its beautiful lights, and Catalonia, for the celebration of the arrival of the Three Kings on Epiphany. Here we bring you some of the main aspects of Christmas that you may see and enjoy throughout France.

In the run up to Christmas many cities, towns and villages have a Christmas market where artisan produce and gifts are sold. Some towns have a fantastic foire au gras featuring local culinary delicacies and produce, such as foie gras, and confit de canard. The streets are filled with the delicious aromas of spices and cinnamon, and visitors can purchase yummy sweet treats such as gingerbread, and bredele biscuits, sip on a steaming mug of mulled wine, and shop for authentic Christmas crafts.

Ever since 1570, Strasbourg in Alsace has hosted its Christmas market, the famous Christkindelsmärik, making this the oldest Christmas market in France. As evening falls Christmas lights and decorations make the market come to life and the magic begin. In Place Kléber, the huge Christmas tree stands to welcome visitors from all over France. Seasonal fare includes Berawecka the Christmas cake which resembles a Swiss roll made with a filling of dried pears, figs, prunes, raisins and dates to which are added lemon peel, chopped almonds, hazelnuts and walnuts. Another favourite is the Kougelhopf cake which is available all year. The cake is a symbol of Alsace and looks like a Panettone baked in a bundt tin. The combination of German and French traditions and cuisine in Alsace makes the region a very special place to celebrate Christmas. More on Alsace Christmas Markets.

Lille is another city great to visit at Christmas time, not only for its Christmas market but for its spectacular lights particularly unbeatable at Christmas time. A stroll along Lille’s streets on a December evening is a lovely way to soak up the atmosphere. One of the most magnificent of the city’s sights is the Grande Roue Ferris wheel, a dazzling kaleidoscope of colour by night. The city’s ornate architecture, with its array of buildings from fabulous Flemish to neo-classical French, is even more striking when rimmed by sparkling lights and Christmas decorations.

Whilst France is a largely secular country, attending Midnight Mass on Christmas Eve is still an important part of Christmas for many families. This can then be followed by a huge feast, called le Réveillon (from the verb réveiller, to wake up or revive) – although more and more families opt to celebrate the Réveillon on Christmas Day when it is easier for the whole family to gather together. The Réveillon is the culinary high point of the season. Each region in France has its own traditional Christmas menu, with dishes like turkey, capon, goose, chicken, and boudin blanc.A starter of oysters is very common, followed by turkey or goose, and for dessert there is usually a bûche de Noël (Yule log). Some families in the region will also have a pain calendeau (Christmas loaf), part of which is supposed to be given to the poor.

French children look forward to Christmas in the hopes that Père Noël (Father Christmas) will bring them gifts, but if you haven’t been nice… there is also Père Fouettard, in Alsace, who gives out spankings to bad children! Like many countries in Western Europe, the Christmas season in France begins with Saint Nicholas’ Day, on December 6th. Some French parents choose to give children their Christmas gifts on Saint Nicholas’ Day, as opposed to Christmas Day, which is reserved for religious services and the family gathering. In other parts of France, Père Noël comes bearing gifts on Christmas Eve.

The first recorded Christmas tree in France was a fir tree, decorated with artificial coloured roses, apples, sugar and painted hosts, presented as the holy tree of Christmas in the French city of Strasbourg in 1605. Nowadays, families will gather some time before Christmas Day to decorate the tree and then on Christmas Eve when the children are asleep, little toys, candies and fruits are hung on the branches of the tree as a supplement to the gifts Père Noël has left in the shoes before the fireplace. 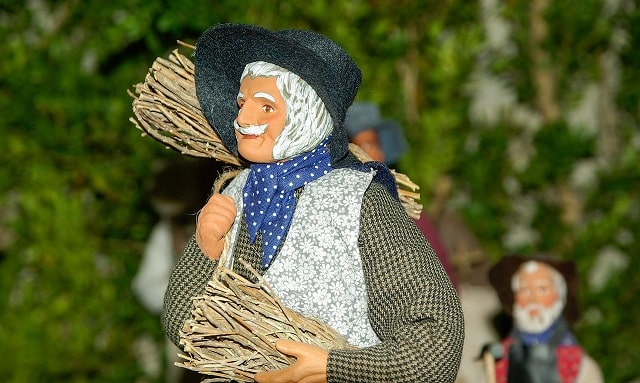 Nearly every French home at Christmas time displays a Nativity scene or crèche, which serves as the focus for the Christmas celebration. This tradition emanates from Provence, and is very popular throughout France. The crèche is populated with little clay figures called santons or “little saints.” An extensive tradition has evolved around these little figures which are made by craftsmen in Provence. In addition to the usual Holy Family, shepherds, and the Three Kings, the craftsmen also produce figures in the form of local dignitaries and characters such as the mayor, the priest, the policeman, the butcher, the baker, etc.

Another popular tradition is to have a living nativity scene (crèche vivante) – also known as a pessebre in south west France – performed at various times thought the Christmas season. This is a dramatic reconstruction of the nativity story played by members of the community.

The city of Perpignan in the Pyrénées-Orientales department of Languedoc-Roussillon, makes the most of celebrating the arrival of the Three Kings (les Rois Mages) – a particularly strong tradition in this area which is culturally part of Catalonia – with a procession of wonderfully costumed characters representing the Three Kings and their entourage. This usually takes place around Epiphany on the 6th of January, although in some places in France it is celebrated on the first Sunday in January. 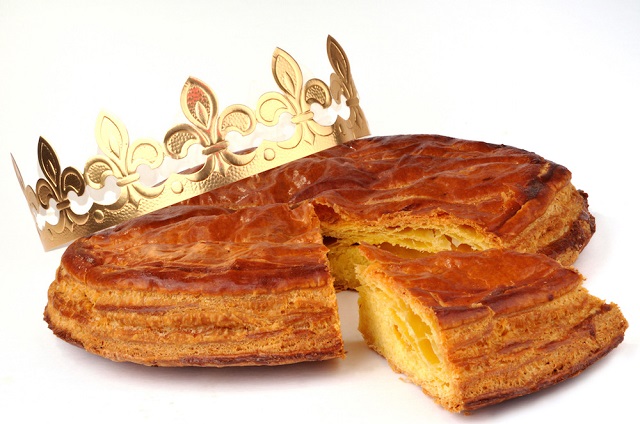 On Epiphany, the galette des rois – a round cake made with layers of puff pastry and frangipane filling – is cut into pieces and distributed. The galette is traditionally decorated with designs of stars, crown, and flowers, and a special bean or trinket known as a fève is hidden inside. Whoever gets the piece with the fève is crowned “king” or “queen” for the following year.