Are You Planning a Naughty Christmas in France? Beware of Le Père Fouettard 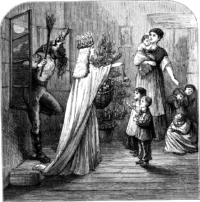 The direct translation for this character would be “Father Whipper” (fouet is French for whip), a scary sidekick to Santa, who accompanies him in his rounds but isn’t quite so jolly as good old St Nick. The job of this scraggly, bearded and black-hooded “father” is to dispense lumps of coal to children on the naughty list, while Santa gives gifts to the nice ones.

Le Père Fouettard (also referred to as Hans Trapp) got his name because in the past he was said to bring a whip or a bundle of switches and actually give the naughty kids a good hiding.  As if this wasn’t disturbing enough, some versions had him carrying a basket on his back in which he would place children and cart them away.

Fa-la-la-la-la! Are you feeling the Christmas cheer yet?

It’s hard to say where these stories originate as there are traces of Le Père Fouettard all the way back to the 10th century. One version tells of an innkeeper who captured three wealthy boys and killed them in order to rob them. The story claims that St. Nicholas forced Le Père Fouettard to become his assistant as a punishment for his crimes. In our Anglo-Saxon vernacular we have our dark anti-hero in Dickens’ character of Ebenezer Scrooge, but while he was certainly grumpy, he was not quite so hands-on.

Previous Article A life in Provençe that suits three generations
Next Article Word of the Week: ‘prendre’