We opened a hotel in the Pyrénées 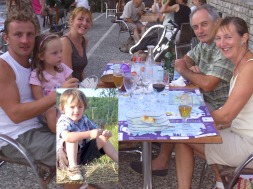 In July 2006, Roger Bruton, his wife Gillian and their extended family, swapped Stockport (Cheshire) for a new life in France. They settled in the Pyrénées, where they set up a small hotel. Roger tells FrenchEntrée their story…

“The search took about a year. We found an English-speaking estate agent and gave her the list of our requirements. We wanted to be within easy reach of the mountains and the beaches. We started in Les Landes, where my brother lives and gradually spread our search out from there. We had a budget that kept us away from the expensive villages and gradually homed in on Monein.

“Family and friends were in Les Landes on holiday when the property was first visited… A cloudy January day is probably not the best time to visit a prospective new home but if you say “yes” in those circumstances, things can only get better!

“After we found the property, a 260 year-old farm in rolling countryside, we spent a lot of time planning how we were going to develop the buildings. We used an architect in France.

“The original plan was to run a B&B/gîte but as we passed the five bedroom limit, we were forced to develop the business as a hotel. In retrospect, this was a good thing because it reduced the amount of competition we were up against and put us in a different league when advertising. Had we seen what lay ahead, we might not have gone through with it!

“The amount of ‘red tape’ involved in creating a seven-room hotel compared to a five-room B&B is awesome. The committee that visited us to decide on our application for hotel status was 13 strong. They all had clip-boards. None spoke English.

“All the buildings are constructed from stone and lime mortar. There is the main farmhouse, which is still being developed; the medium-sized barn which we are converting into a home for Gillian and myself; three small outbuildings which are also being worked on; and the hotel, which is a large converted two-storey barn/wine store. We have built a swimming pool and have completely demolished a tennis court sized chicken shed.

“While we waited for planning permission for the barn/hotel conversion, we worked on the farmhouse. The previous owner had moved to the ground floor some years before. We basically ripped everything out and started again with everything above the ground floor. This was to
be our learning curve for the hotel.

“The hotel building was just an empty barn with no real windows. It took a year of 10-hour days, seven days a week, to get to the point where we could open for business.

“The very first thing I would advise is to find an English speaking accountant who understands what you are going to do. They need to be at your side from day one. In addition, an English speaking bank is a big help. All this is not to avoid speaking French – it is because the technical stuff, in French, is very difficult to deal with.

“I have learned a whole raft of new skills relating to building, although I don’t foresee putting them to use once this place is finished.

“The people here are the nicest and most helpful I have ever met. And I have never before shaken hands and kissed so much in my life. I only really notice differences now when I visit the UK. Vandalism, traffic jams, road-rage, crowds and other stress-creating features of life seem to be treated as the norm in the UK. The nearest window that we do not own is 200m away. I like it like that!”

Previous Article Choosing a Pool in France
Next Article Returning to the UK from France?