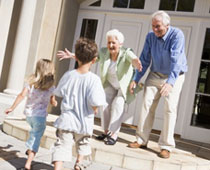 There are a number of issues you may need to take advice on before you move, and when living in France. The case studies below demonstrate how a financial consultant has helped some expats in France.

Mr and Mrs Thompson, who are in their mid 50’s, had been residents in France since 2005, at first, Mr Thompson continued to work as a consultant for his previous UK employer. This had provided sufficient income for their new life in France, but with the credit crunch his consultancy work finished and they needed a new source of income.

With work from the UK very unlikely, and their savings dwindling, they were chatting one day with a friend of theirs, another UK expatriate, who suggested they speak to a financial consultant.

Having met with one of Siddalls (now Blevins Franks) regional consultants in France, it transpired that Mr Thompson had built up various Personal Pensions during his working life, but had not considered drawing on them, since the retirement date on the policies was age 65. In fact, benefits can be drawn from age 50 (although this will be increased to age 55 from 2010).

The consultant talked Mr and Mrs Thompson through the options available. As they considered themselves to be low risk, annuity purchase was felt most suitable, and Mr Thompson had some minor health conditions that made him eligible for an enhanced annuity.

Having ascertained the type of annuity that Mr and Mrs Thompson required, (which was an annuity that continued to be paid in full to Mrs Thompson should Mr Thompson die before her), the adviser asked all the annuity companies for comparative quotes, and then prepared the paperwork to combine the pension funds and purchase the annuity. The whole process took about 5 weeks.

The lump sum generated additional capital for them to draw on, and more importantly the annuity gave them a secure income which replaced the income from Mr Thompson’s consultancy.

Mr and Mrs Evans approached the consultant in the UK, having sold their UK house and made an offer on a French property. Mr Evans had just passed his 60th birthday, and had recently been made redundant. Mrs Evans was approaching her 51st birthday, and had left her job as a secretary. They required advice on a number of areas, but specifically on pensions since they would need an income in France and Mr Evans had a number of differing UK pension plans – a couple of final salary schemes, and two personal pension plans. Mrs Evans had a small personal pension.

The consultant examined all of their UK pensions – approaching the Final Salary schemes for details of the clients pension benefits, and also asking for a transfer value (this is where the schemes will give a transfer value that can be applied to a personal pension. This helps the professional gauge whether the scheme offers good value for money).

Having conducted their analysis, the adviser felt that it was best to retain Mr Evans’ final salary pensions to age 65 (importantly though, the analysis gave them an estimate of the pension payable from age 65). It was decided to elect benefits from Mr Evans’ personal pension plans, and defer Mrs Evans’ personal pension. If Mrs Evans’ personal fund had been larger the advisers says that they would have been likely to recommend drawing benefits, but as the fund was quite small, Mrs Evans may be able to elect the fund as a lump sum at age 60 (if your total pension funds are beneath a certain limit, it is possible to elect it as a lump sum from age 60).

For Mr Evans’ personal pensions, an unsecured pension was felt appropriate since they had a number of fixed pensions (final salary and UK state pension) commencing within the next five years and they preferred to retain control of the fund and draw an income when it was required. Having held a number of investments in the UK they were familiar and comfortable with investment risk, which is very important for unsecured pensions.

How To Get A Mammogram in France (for Free)