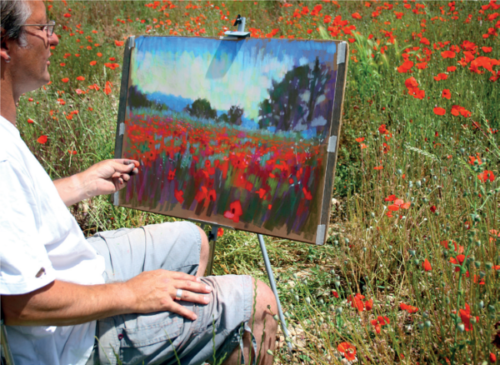 When artist David Napp first came to Provence 30 years ago, he fell for its wonderful light. Since then, his work has seen him mixing with the rich and famous, says Jeannine Williamson.

Much has been written about the Provençale light and all of it is true. I was suddenly surrounded by olive trees and lavender fields, all bathed in this incredible light.” This was a moment of revelation for artist David Napp, standing in a field in a small village near Saint-Tropez.

More than a century after the likes of Cézanne and Van Gogh came here and set up their easels, breathed in the radiance of the Provençal countryside and committed it to canvas, David discovered what made Provence so magical for himself and knew he wanted to be here. That was 30 years ago and he is still capturing the region’s beauty, warmth and gentle pace of life in his work.

And this year, after decades of dividing his time between France, Italy and the UK, David is planning to move to Provence to live full time. He’s currently looking for a property in which to be based and to host residential art courses.

His work in France is a far cry from his art college days when he honed his skills outside in the (often freezing) Kent countryside. Things all changed for David when his talent caught the eye of one of his tutors, who invited him and a group of other top students on painting weekends to France, within easy reach of Kent. The first time he crossed the Channel was a major milestone in David’s life. 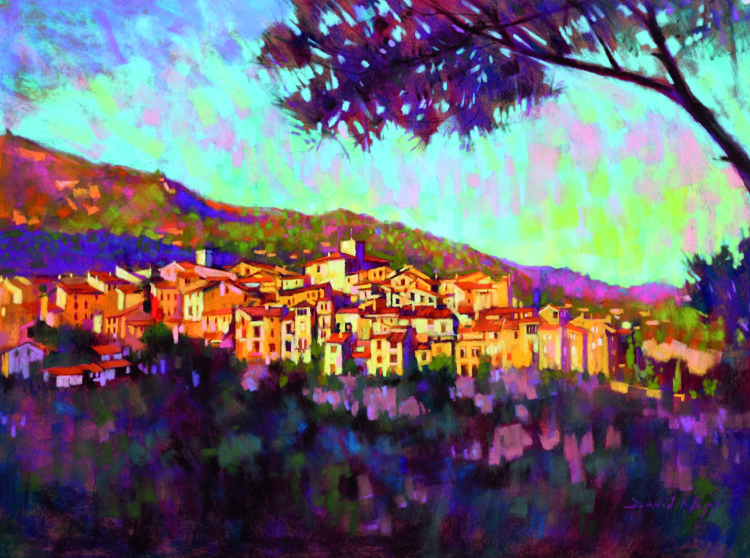 Though he loved art college, Kent-born David admits that he wasn’t a big fan of school growing up.“I didn’t like the discipline and being told what to do,” he says. “I was only interested in music and art. Ironically, I got a double unclassified mark in both the oral and written sections of my French O-level, but now I am bilingual. I have even been told that I speak French in my sleep!”

Leaving school at the age of 16, he discovered his true vocation after enrolling at Canterbury College of Art, where he thrived, achieving a first class degree in design and illustration. He was later invited to teach drawing on the foundation course at the Kent Institute of Art and Design, which he did before he moved to France. “At art college, everything was much more free and relaxed and it was up to you whether or not you were going to make a go of it,” he says. “I went from being a rebel to a really committed student.” 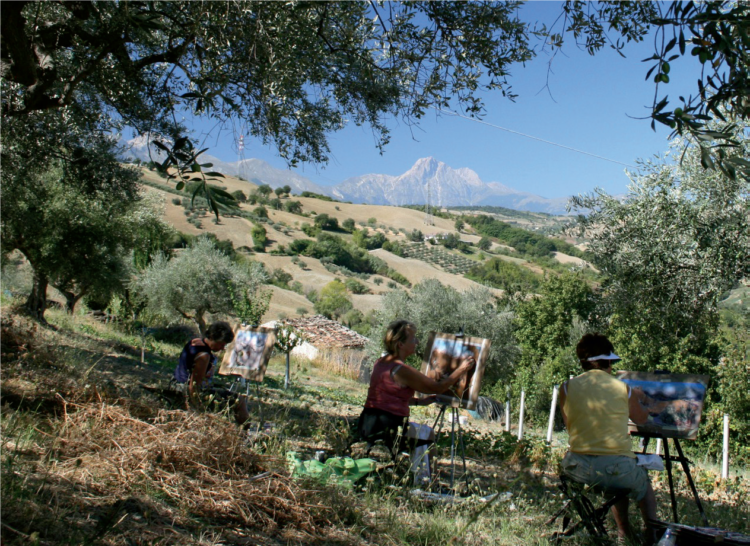 And this was where his passion for France started. “I was really encouraged by a couple of the tutors. They invited me to work with them in the Kent countryside at weekends and, later, in Montreuil-sur-Mer in Pas-de- Calais.” The walled hilltop town overlooking the Canche valley had a powerful impact on David. It was 1987, the same year Peter Mayle began his odyssey in Provence.

“That was when I discovered my love of France,” he explains. “It was also the year the film Betty Blue, or to give it its French title 37°2 Le Matin, came out and that really captured my imagination as well. It was a great place to go, come rain or shine.”

After embarking on his professional career, he received a fortuitous and ultimately life changing offer that took him to Provence. It was the start of numerous meetings, often spontaneous and unexpected, that have resulted in David forming enduring friendships and long-standing associations with clients – including famous names such as inventor Sir James Dyson, Eric Idle and the late novelist James Herbert. Provence also influenced his subject matter and provided him with a base.

“A client had a place in Provence and said I could stay there for three weeks in return for a painting of the house,” says David. “I went down to this small village near Saint-Tropez.” Being surrounded by olive groves, lavender fields and amazing light was a watershed for David. “Until then my only knowledge of the region was through the paintings of other artists. In 21 days, I produced 17 pictures.

The second time I went back, I produced 84 paintings in just three months.” David’s pieces, mostly in pastel with the occasional use of oil paints, combine elements of colour, light and movement. “Before coming to France, my work was much more sombre, he adds. “When I came to Provence, it was like taking off sunglasses – my work became much lighter.” Over the years, David has enjoyed several plaudits including scooping the Elizabeth Greenshields Award for Young Artists in both 1986 and 1990, while in 2013 he received the prestigious Pollock-Krasner Foundation Award in New York.

A swimming pool for summer heat

He has had several solo exhibitions in London and around the UK, as well as in the US, France and Holland. He has been in many group exhibitions, too, including at The Pastel Society, the Royal Watercolour Society and the Royal Society of British Artists.

David has lived in various places across the south – including in Uzès and Montpellier – but his heart is in Cotignac, the picturesque village nestled at the foot of towering cliffs with troglodyte caves, which is a magnet for artists, authors and creative thinkers.

In 1987, he met Diana Bauer. She managed rental properties in the area including her own at Les Rabassières and three secluded, rural, Provençal stone cottages outside the village of Entrecasteaux and close to Cotignac, which are now looked after by her daughter Annette.

Overlooking the Bessillon mountains and surrounding olive groves, the houses provided an idyllic and inspiring base for David in addition to being a peaceful haven for visitors looking to get away from it all. “I was very lucky as Diana’s father and brother were both artists and she kindly let me stay in the houses whenever there was a period that they weren’t rented out.”

A relaxing place in the dappled shade at Les Rabassières

Landscapes, villas, châteaux and portraits have long been favourite subjects for David’s paintings, but another chance meeting in 2003 allowed him to add a new string to his artistic bow.

“I was in Le Somail, the pretty village on the banks of the Canal du Midi and saw a barge called Johanna moored under some trees. The light was beautiful so I sat down and started to paint it,” says David. “Someone came over to have a look and told me he was the owner, Andy Fletcher.”

The pair, now great friends, got talking and Andy subsequently commissioned David to paint the yacht Ocean Trilogy, which he once skippered, along with a run of highquality prints for his friends and family. “Subsequently I painted five luxury hotel barges for the Belmond Afloat in France holiday company and the hotel barge Après Tout, which is owned by British couple Rory and Caroline Macrae, who are also friends of Andy’s.”

Being in the right place at the right time also led to David painting the stunning classic yacht Nahlin. In 1936, it was used by King Edward VIII and his mistress Wallis Simpson for an Adriatic cruise. This was one of the scandalous events that lead to the King’s abdication. 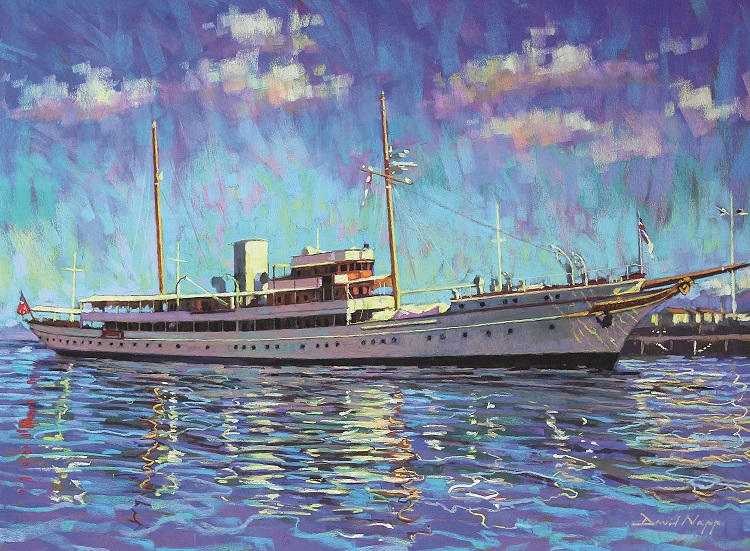 One evening, David was having dinner with Eric Idle, when Eric said his friend James Dyson was planning to buy Nahlin. “I got a photo of it moored on the Côte d’Azur and started painting it,” says David. “When I was halfway through, Eric said he wanted to buy the finished painting and give it to James as a present.

“Painting boats is very different to other subjects I’ve worked on, you have to capture them very accurately. He says he’d like to Painting outdoors in the wonderful light and glorious countryside of Provence brings a real vibrancy to students’ work paint more yachts. “Paintings and prints in my style could be of interest to captains, agents, brokers and charterers.”

His association with Eric also led to a truly unique opening speech for one of his exhibitions. The comedian penned a Pythonesque introduction in the form of a dialogue between Eric and an imaginary gallery owner. It culminated with the words:“We were expecting something a little more interesting.” “You gallery owners are all the same. Two a penny. Living off the back of starving artists. Taking the bread out of their mouths.” “Yes, thank you.” “Why don’t you get Peter Mayle to write something then?” “He’s too expensive.”

Down to the Fine Art

Another famous connection has seen David and his work immortalised in the pages of Portent by the late James Herbert: “The bleakness of the living room’s white walls was broken up by three vivid original landscape pastels, all of them easily recognisable as Provence and signed by David Napp.”

So whether it’s a case of life imitating art or providing Francophiles with a permanent reminder of their beloved France, wherever they are in the world, David has definitely made his mark – in more ways than one.

David will be offering two- to five-day art programmes, suitable for all abilities, from his new Provençale base. For details, go to www.davidnappfineart.com 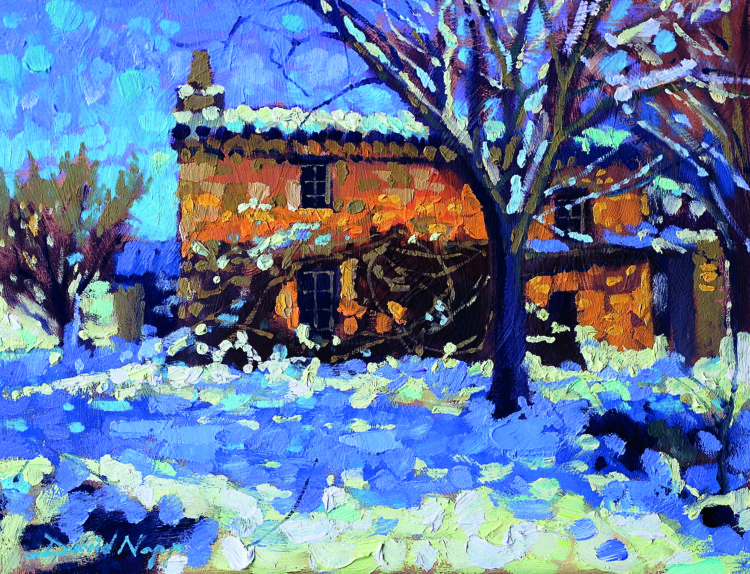