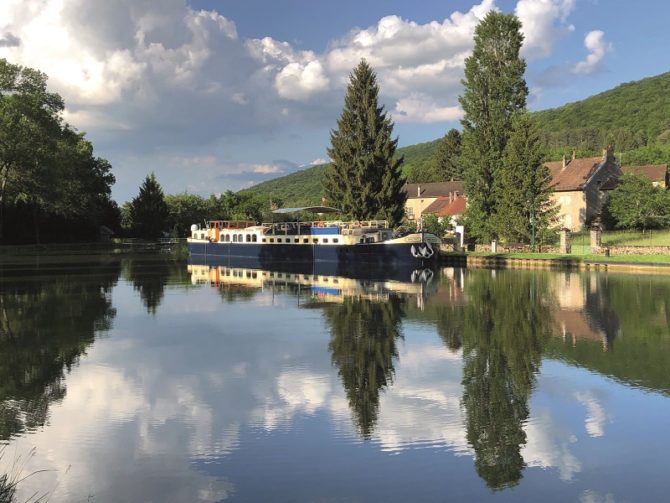 It was chance and a big helping of get-up-and-go that saw Caroline and Rory Macrae finally realise their dream and launch a luxury hotel barge business in Burgundy. They tell Jeannine Williamson how they did it…

Caroline and Rory Macrae are standing on the gleaming teak deck of Après Tout, welcoming their next group of passengers with chilled Champagne and delicious homemade canapés. The late afternoon sun casts a mirror image of the boat’s blue hull on the water in the small port at Nevers. Rory casts off and the vessel glides beneath a bridge to begin its next journey along the Canal Latéral à la Loire.

The idyllic scene is a far cry from the 1950s, when the 127ft barge was built to transport grain along the network of French waterways. In more recent times, she languished for three years, neglected, at the side of the Canal de Bourgogne. It also marks the culmination of a complete lifestyle change for the couple, who met when Caroline was training at Le Cordon Bleu culinary institute in London and Rory worked for his family’s Carlisle shoe business. 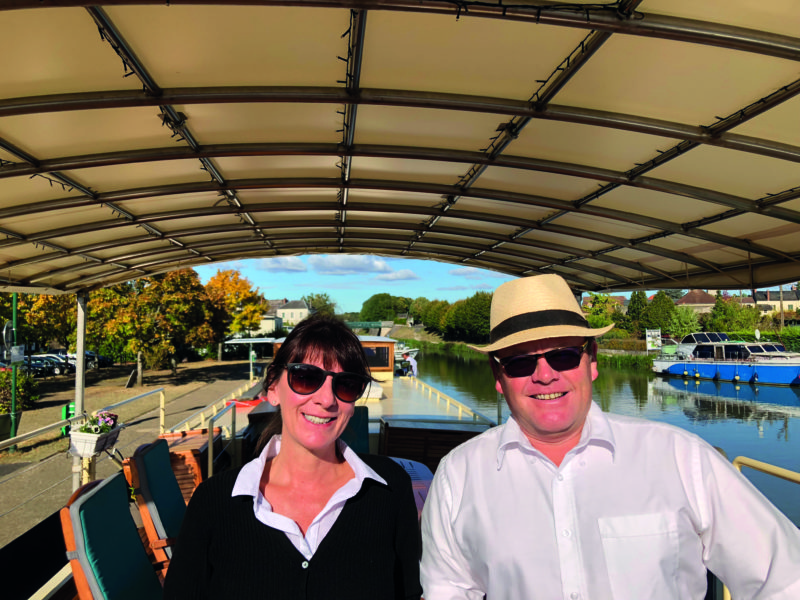 When Caroline began catering at weddings, corporate events and private parties (with Rory helping out), they decided to work abroad “for a couple of years”, but didn’t initially set their sights on France.

“We didn’t really mind where we went,” recalls Caroline, as her six new guests settle into their cabins and she starts preparing dinner in her galley next to the wheelhouse. “In 1991, we saw an advert in a national paper for a chef and a steward to work on a boat in the South of France. We applied and were offered the positions. Neither of us had any background in sailing – the work just happened to be on a boat.”

A Change of Scene

It turned out to be a life-changing decision that led to the couple moving to France in 2003. They launched their own luxury hotel barge in 2012, which mainly attracts Americans and fellow UK Francophiles.

“Rory has always been very good with the technical side of things,” explains Caroline. “Within the first year of taking up that first job, he became second skipper and decided to apply for his licence to become a captain on the inland waterways, which involved having to learn French.”

Subsequently, a passenger invited the couple to work on her estate on Long Island, Connecticut; Caroline as cook and Rory as caretaker and driver. They spent two years in America, but their love affair with France had been cemented and they returned to work for a hotel boat company.

Caroline was put in charge of operations and Rory was technical manager. He was promoted to general manager, looking after all five barges operated by the company. As Après Tout moors for the evening and passengers enjoy their first alfresco dinner on the sun deck, Rory takes up the story.

“We both enjoyed our time there, but one day I thought, ‘Do I want to be in an office for the rest of my life?’. We knew a barge was up for sale; in fact, I’d already looked at it on behalf of the company we worked for. Caroline and I had talked about running our own business on many occasions and, with our background in the industry, we had a very clear idea of exactly what we wanted to offer guests: how we could put our personal stamp on it and make it different from other cruises.”

Rory laughs as he describes how purchasing the barge turned out to be far simpler than buying their French home; a three-storey apartment on an island in Chalon-sur-Saône. Their place on dry land is a handy 50-minute drive from Saint- Jean-de-Losne, where many floating hotels start and finish Burgundy cruises.

“The barge had been converted to a hotel boat, but for three years it had been sitting by the bank three miles away in the next port. As time went on, the price came down. One evening in 2011, I was sitting in my office and decided to put in an offer. Ten minutes later, I had an email back accepting it. We made arrangements with the bank to transfer the money and within three weeks we owned a barge!

“It was much easier than buying our home, as we viewed around 30 properties and couldn’t find what we were looking for. In the end, I told Caroline to continue searching by herself, which turned out to be a good move as the next one she went to see turned out to be the one we bought.” 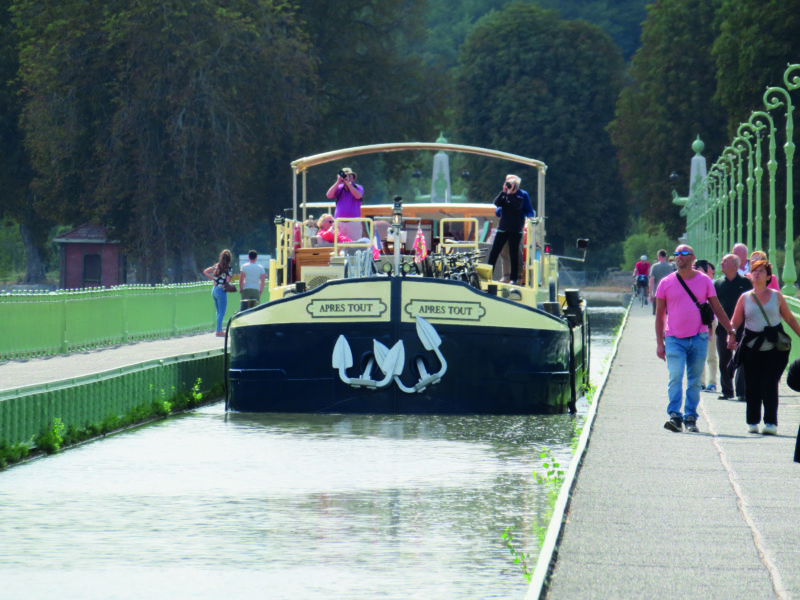 They spent the winter carrying out extensive improvements to get the barge shipshape for its first cruise in 2012. “The deck was grey and at first I thought I’d  have to take it up, throw it out and start again,” says Rory. “Then I had a closer look and realised it was a  deck and I could sand it right back and oil it.”

To this day, Rory oils – rather than varnishes – the deck when the barge is at its winter moorings in Saint-Jeande- Losne. It is a head-turning feature, along with the hot tub and his innovative sun canopy, which can be lowered at the touch of a button to fit beneath low stone bridges.

Other changes include the name, which was switched from Le Premier to Après Tout, meaning ‘after all’ in French. Caroline remarks: “It’s a reminder that we are proud to finally be running our own business, after all these years in France.” 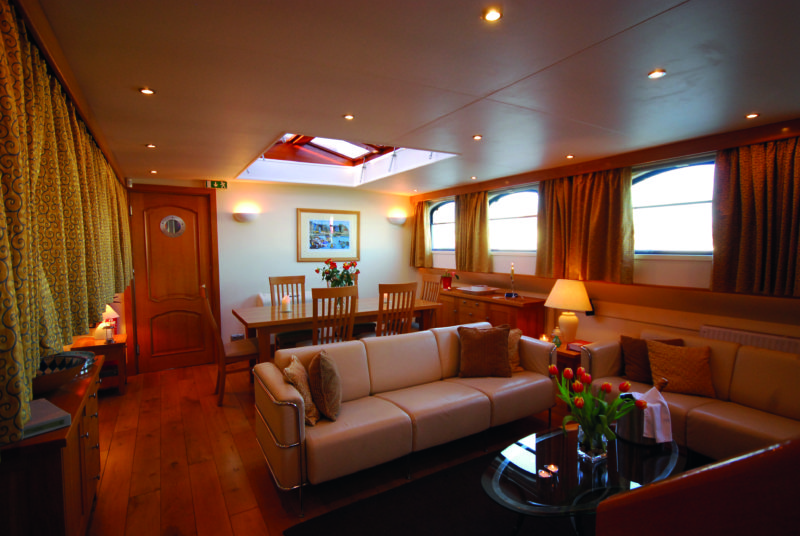 Carrying just a handful of passengers in style, the barge has a cosy salon that doubles as an indoor dining room and three beautifully appointed cabins. Each year, the couple refresh and upgrade Après Tout, recently equipping bedrooms with chargers for phones and other portable devices, buying sumptuous deck chairs that convert into loungers, replacing the fleet of on-board bikes and taking delivery of a new Mercedes minibus to transfer guests to and from Paris and take them on daily excursions.

With the aid of a second skipper, guide and on-board hostess, they offer six-night cruises where everything is included – from Caroline’s gourmet meals heralded by handwritten menus, an open bar and expansive fine-wine cellar, to private vineyard tours and châteaux visits.

“We want our guests to feel that everything is taken care of and they don’t need to think about anything,” says Caroline, who has written a cookery book that many passengers take back as a culinary keepsake. “We try and do the thinking for them and anticipate their requirements. Luxury, to us, means relaxation in great comfort, so we pamper our guests, and hopefully educate them about the region, but the most important thing is that they feel at home.” 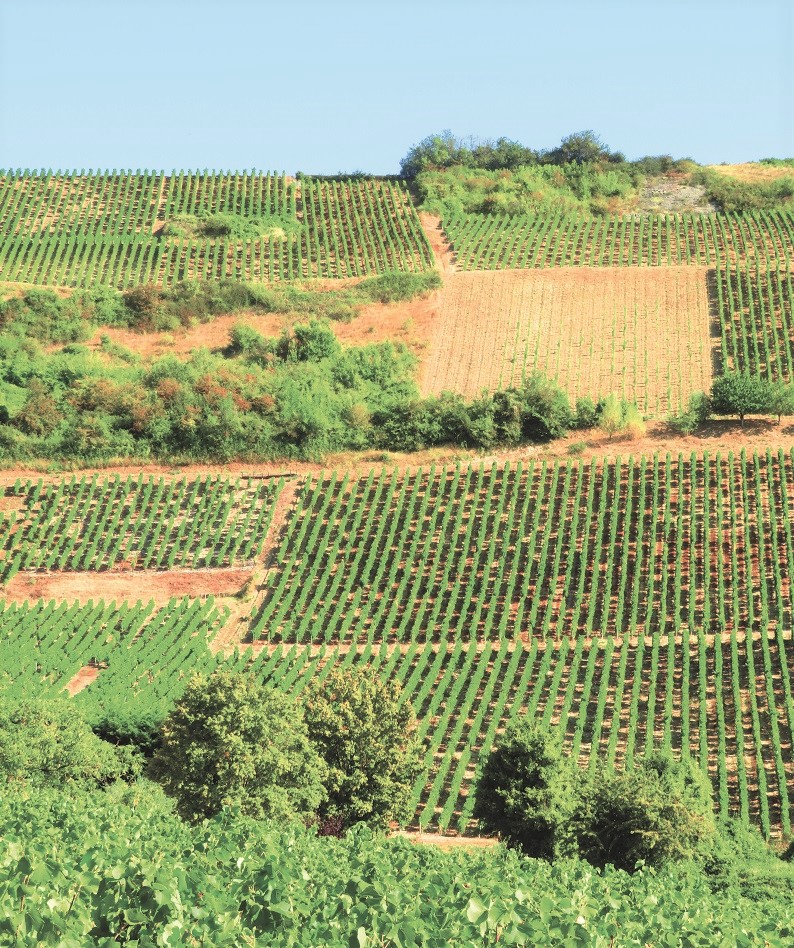 Originally, Après Tout sailed through Burgundy, from Saint-Jean-de-Losne to Pont d’Ouche, and into the Beaujolais wine region from Saint-Jean-de-Losne to Lyon. With an increasing number of repeat passengers – some have booked up to five times and others take whole boat charters to travel with friends and family – in 2018, they introduced a new Loire trip between Nevers and Briare. It includes crossing the imposing 2,170ft Briare canal bridge, which opened in 1896. It took six years to construct and was the world’s longest navigable aqueduct until 2003, when it conceded the title to the Magdeburg bridge, which spans the Elbe river in Germany.

Looking ahead, Caroline and Rory plan to sail in Alsace from 2020 and are set to extend their hospitality to dry land by opening gîte accommodation in La Bussière-sur-Ouche. The latter is another of Rory’s spontaneous decisions that echoes acquiring Après Tout.

“You can see the house from the water and we had watched it being built since work started in the 1990s,” says Rory. “We really liked it and I am always on the lookout for another project to keep me busy in winter. One day I was browsing online, looking at properties, and was surprised to see it up for sale. At the time, Caroline was on holiday with friends. I arranged to see it the next day.

I met the agent on the drive and he said I might not want to go any further as the house had never been fully completed or inhabited and there was no running water or electricity. He seemed surprised when I said that was even better, as it gave me a blank canvas to work with. I made an offer there and then and that evening told Caroline I’d bought it!” His impulse buy is now in the final stages of being converted into a three-bedroom house to the same high specifications as Après Tout. The couple hope to open its doors to the first guests in the very near future.

In the meantime, as the barge floats away taking passengers on another tranquil voyage, it’s easy to understand why Caroline and Rory took the proverbial plunge in France – a choice that really did change the course of their lives. 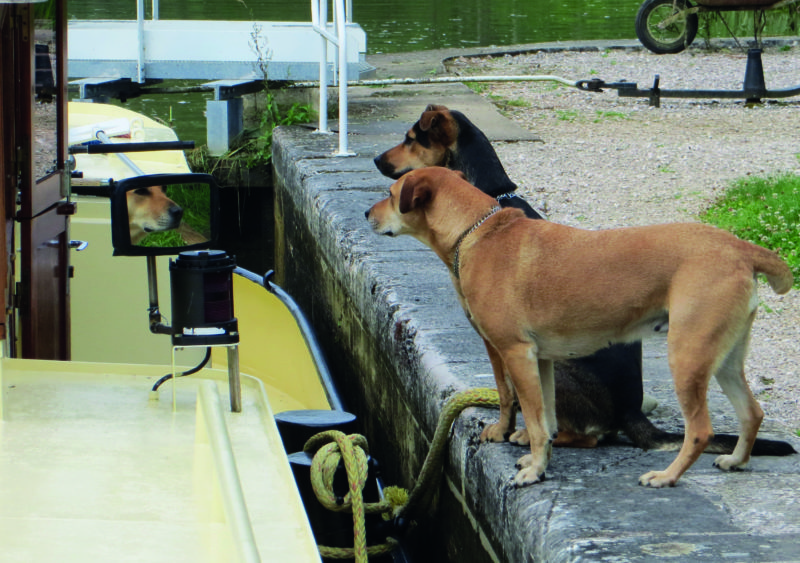 The lock keeper’s dogs keep an eye on proceedings