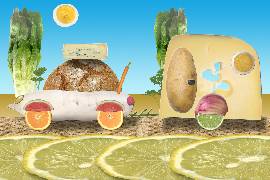 The main factor in surviving France as a vegetarian, in my opinion, is upholding a strong sense of humour and not taking things too seriously. That is not to say don’t take your vegetarianism too seriously – my wife Jocelyn and I manage to stick strictly to our beliefs and never knowingly eat meat or meat products. You have to remember though that in France vegetarianism is far from being understood and so you have to approach life, as far as eating is concerned, totally differently. Things are bound to go wrong from time to time so it is best to try to see the funny side.

My father-in-law once managed to arrive back from a trip to our local boulangerie (which is a pretty safe bet for veggies) with a loaf containing lumps of meat. Amazingly, in over ten years we had never seen such a loaf in there before and have never seen one since!

It isn’t just the French that have problems understanding vegetarianism though. I was recently asked by a puzzled British expat how we vegetarians were able to choose which wines to drink. I was perplexed at this and didn’t understand his question, until he explained that it was easy for meat eaters because wine bottle labels describe which types of meat would complement the wine, but he had never seen a label saying that a wine should be served with vegetarian food. Up until then I’d thought that he was a reasonably intelligent person.

A couple of years ago we ordered a vegetarian pizza in a nearby town and when it arrived were horrified to find a large slice of ham adorning it – we were even more horrified when, after explaining that we didn’t eat meat, it was taken away and returned with the square imprint of the carefully removed ham plainly visible. To make matters worse, the waitress then loudly announced to the next table (presuming we didn’t understand French) that she assumed, unlike the English, they would not object to the free meat that was being provided on all pizzas that evening. To be fair a similar thing happened to me in Belgium, and in Saudi Arabia I was once told that a particular dish only contained ‘small’ pieces of meat.

The problems can be of our own making though. I will never forget my first visit to France with my girl friend of the time, who is now my wife. We stopped off in Chaumont, purely because it was twinned with Ashton-under-Lyne, our place of work, and Jocelyn was really impressing me with her excellent French until I started to eat the cake she had expertly purchased from a patisserie, and bit into a piece of ham!

Then of course there is that rarity for veggies in France – the dilemma. After being told by non-veggie friends that the restaurant in our local chateau had a choice (!) of vegetarian food, we, with much trepidation, booked. Upon arrival we were presented with a separate menu with, amazingly, no less than eight suitable dishes, all sounding very mouth-watering. We were thrown into a total bout of confusion by being able to make a choice.

There is also the fear of causing offence. Recently, we were invited to a friend’s house for a meal and were served shepherd’s pie. Jocelyn and I spent the next few minutes miming to each other, trying to determine if our friend was clear about our dietary needs. We then proceeded to ask a series of cryptic questions about the contents of the dish, saying things like ‘this looks realistic’, but were none the wiser. By the time I’d plucked up enough courage to ask a straight question to ensure that the food was meat-free, it was stone cold and our friend was beginning to doubt our sanity. Luckily for us, her response was that she often used veggie mince as she thought it both tasty and healthy.

One of our favourite restaurants, ‘La Passe Muraille‘ in Angoulême, is owned by a particularly jocular Frenchman. He finds it very amusing (as do we) to point to his sign on the door that proclaims ‘Vegetarians Accepted’, just as credit cards or dogs are accepted.

We were once at the coast and, strangely for France (or even for Spain!), spotted vegetarian paella on a menu outside a restaurant. I was quite clear in informing Jocelyn that there was no way that it would be vegetarian and that I would not be entering the premises under any circumstances – many French of course (and British) believe that veggies eat fish. She, however, said I should have more faith and we should support people who were taking the trouble to provide veggie food. I eventually agreed, but only after giving the restaurateur the third degree treatment and obtaining a signed statement in triplicate stating categorically that it was pure vegetarian fare. Even so, once it arrived, I examined every morsel laboriously and soon spotted bits of meat (mushrooms!) and fish (asparagus!).

A couple of years ago, and much to the amusement of all of my friends, I had a painful attack of gout and was told categorically by our village doctor that I was clearly eating far too much red meat. Incidentally, on my first visit to him, after I had explained that I was English, he pronounced ‘That is not a disease!’