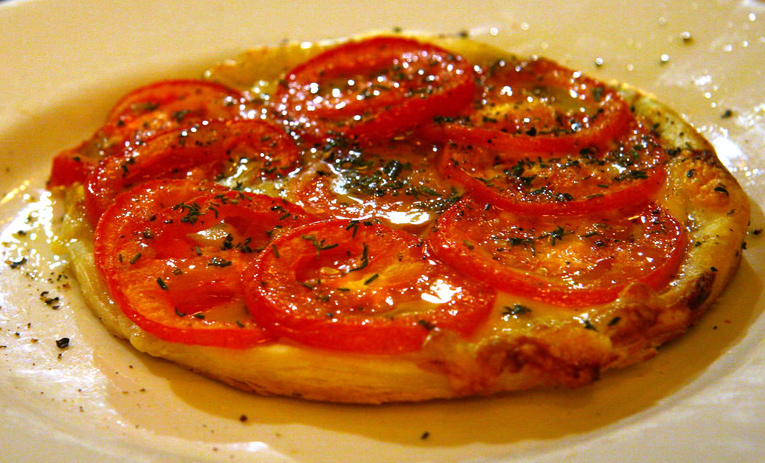 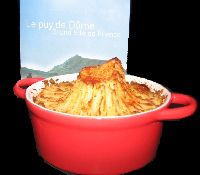 This recipe is from Andrea at www.3placedesarbres.com – a vegetarian chambre d’hôte at Felletin in the Creuse which is just over an hour away from the amazing Puy de Dôme. A take on shepherd’s pie using puy lentils and aduki beans, this is a tribute to this natural monument.

Fry onion and mushrooms in the oil until the onions are soft. Add the garlic, carrots, wine and herbs. Cook until carrots start to soften (about 5-10 mins). Add the passata, tomato purée, bouillon, paprika and pepper. Simmer gently, adding water from the potatoes (see below) if necessary until it resembles a thick stew (remember more water will be absorbed during the oven cooking).

Meanwhile boil potatoes in salted water until soft. Drain, reserving the liquid to add to the mixture above and put 50cl of it back into the potatoes. Add milk, mustard and margarine. Mash until creamy.

Set the oven to 180 degrees C. Take 4 cocottes and share the bean mixture between them. Pile the mash on top and fashion it into a volcano shape (this is playing with your food – don’t tell your mother!). Once your artistic masterpieces are complete, sprinkle with some paprika to give the appearance of vegetation growing up the Puy. Bake for 30 minutes until the potato is browned.

Another dish provided by Andrea at 3placedesarbres.com. A twist on the fabulous Limousin dish, this isn’t pasta or pâté but a lovely potato pie. The reference to “galloise” is the addition of leeks – Andrea is Welsh. This is comfort food at its best and can be eaten hot with a green salad, or cold in picnics.

Don’t start handling the pastry till you need it otherwise it goes floppy and useless.

Heat the oven to 180°C. Thoroughly drain the potatoes. Place half of the pastry on a baking tray and place half of the potato slices on it, leaving about 5cm of pastry free all around, followed by half the onion, then the leeks. Grind pepper over, sprinkle some of the veg bouillon powder, the mixed herbs then the rest of the onions, then potatoes, more pepper and veg bouillon. Spoon the crème fraiche onto the potato layer, spreading roughly over them, not in a particularly scientific way. Take the second piece of pastry and place it on the top. Join the two pieces pastry around the edges, just squishing it round to make pasty type edges. The rougher this is the better as you will have nice thick bits. Make a small hole in the top to let the steam out. Brush with milk or beaten egg if you wish – not essential.

Pre-heated oven to 200 degrees C and bake for 30-40 minutes, until golden brown, reducing the temperature to 180 degrees after 20 minutes.

Hint: In the Auvergne they substitute some of the crème fraîche with blue cheese.

This is a superb savoury version of the classic French dish that can be eaten warm as a main course or cold on a picnic. It’s easy to make, but looks impressive.

Make the pastry: place flour, butter and cheese in a food processor and whizz to make crumbs. Add chives and salt and mix briefly. With the machine still running, add 2-3 tbs water and process until the mixture forms a ball. Wrap in cling-film and put to one side.

In a 22-23 cm ovenproof pan or heavy tin, heat oil and butter. Add sugar and heat until caramelized, stirring it into the butter and oil. Pack tomatoes into the pan, cut-side down. Add salt and pepper to taste. Cook over a medium heat for a few minutes until the tomatoes start to colour on the underside. Remove from heat and leave to cool.

Heat the oven to 200 degrees C. Roll out the pastry on a lightly floured surface until it is slightly larger than the pan. Put the pastry over the tomatoes and tuck the edges down the sides. Bake for 15-20 minutes until the pastry is golden. Remove and allow to cool for 5 minutes so the juices can settle, then invert on a plate so the pastry is on the bottom.

Another dish provided by 3placedesarbres.com, this is a variation on a Limousin dish cherry clafouti. They bought a dehydrator to make use of cherry season by buying lots while they are cheap then drying them out. They experimented by soaking them in Pineau des Charentes for around 5 days, and discovered that using them in this dish makes it even more fantastic. You could serve the now cherry flavoured Pineau with the clafoutis, or just keep it as a treat for the chef!

Heat oven to 200 ˚C
Grease a cake tin or silicone mould
Mix flour and sugar, then add eggs to make a paste
Add the milk and mix vigorously
Add drained cherries (leave whole) and apples
Put the mould onto a baking tray and add mixture
Cook in oven for 20 minutes
Take out of oven and scatter little bits of butter all over
Sprinkle vanilla sugar on top
Return to oven for 5 minutes to caramelise the top
Leave to cool for 5 minutes before removing cake tin or mould

Serve with crème fresh, and (if generous) the cherry pineau