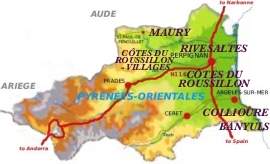 The wine industry in the Languedoc-Roussillon has seen countless changes to its fortunes, development and success. For much of history, the region’s wines were dismissed as quaffing wines – perhaps suitable for the masses, but not the preserve of true connoisseurs; but in recent history and in particular the past two decades, this stigma is being replaced by a growing respect for the dramatic changes the industry professionals have accepted in order to compete with world class wines. But not all Languedoc-Roussillon wines have needed to modernise.

The wine terroirs in the Pyrenees-Orientales department of the region (historically, the Roussillon) – the most southerly department of the Languedoc Roussillon which profits from its glorious climate to produce some of the most complex and interesting wines in the region. The area predominantly produces superb quality Muscat and fortified wines using methods that have barely changed for centuries. In more recent times, the department has seen more investment into its wine industry than ever, especially in the Maury area, and there is certainly a renewed enthusiasm for exploring the specific qualities of the grapes grown here – on a soil that is very different from elsewhere in the region. For wine buffs, no visit to the region is complete without a tour around the Roussillon wineries – and having recently had the good fortune to taste a 1978 Banyuls, I can say it’s definitely worth the effort!

The pretty village of Maury lies in the Agly valley, between the imposing Corbières hills and its ruined Cathar fortresses to the north and the foothills of the Pyrenees with the sacred Mount Canigou to the south. The land it sits on is rather unique in the region – an almost completely homogenous tract of black schist. Whilst non-fortified wines are also made here, the AOC Maury is known best for its deep red, fortified dessert wine – though some white versions do also exist. Principally made from Grenache Noir grapes, Maury fortified wines are kept in oak barrels for at least twelve months before being bottled. Similar to Port, these wines can be utterly sumptuous, and very much worth a taste! And as a top tip, both the swanky Maison du Terroir, and the local café in Maury offer great food for different budgets after your tasting!

The AOC labels of Rivesaltes and Muscat de Rivesaltes are situated in the small peripheral village of Rivesaltes north of Perpignan, with both labels referring to its sweet, fortified wines – the difference being that the Muscat can only be made with Muscat grapes, whilst the AOC Rivesaltes (without the Muscat) can be made form blends including Muscat, Grenache Noir, Grenache Blanc, Grenache Gris, Macabeu and (rarely) Malvoisie grapes. Generally, what is produced has a gorgeous honey-gold colour to it, is very sweet to the taste and perfect as either an aperitif or dessert wine. For Christmas holiday makers, keep your eyes peeled from the 1st of November for the Muscat de Noël – specially made for the season, and an excellent seasonal gift or to take home as a memento of your visit.

Located at the very edge of France where it meets Spain, the AOC Banyuls and Banyuls Grand Cru territories cover the area inland around the fishing villages of Banyuls-sur-Mer, Cerbère, Collioure and Port-Vendres. These AOC labels refer to the fortified dessert wines made here (the Grand Cru being the more superior version which has been matured for at least 30 months). Banyuls wines must be made from Grenache Noir (at least 50%, 75% for the Grand Cru), Grenache Gris, Grenache Blanc and Carignan, and also (but rarely used) Macabeu, Muscat and Malvoisie. Of great significance is the ancient production method known as mutage in French. This is where alcohol is added to stop fermentation whilst the sugar levels are still high; the wine is then matured either in oak barrels or outside in glass bottles that are exposed to the sun to allow the wine to develop, a system known as rancio. The taste of Banyuls is similar to Port, but it generally has a lower alcohol level than Port.

The AOC Collioure wine is mainly a red wine produced in the countryside around the delightful fishing village of Collioure (though there are some wine makers producing white and rosé wine here too). The area that comes under the AOC Collioure label is in fact the same as the Banyuls mentioned above, but refers to the non-fortified wines made in this area; in fact many of the wine makers here make both AOC Collioure and Banyuls wines – determining what percentage of their grapes will be used for each kind of wine depending on how the growing period has gone. AOC Collioure wines are mainly made from Grenache, Syrah and Mourvedre grapes, with a small portion also made with Carignan and Cinsaut.

note – over the past few years there has been a lot of speculation and reports of changes to be made in the AOC system, as yet to be fully clarified – the author apologises, therefore, for any confusion or misleading information, 2010

The variety and quality of Languedoc-Roussillon wines is endless – so, whilst planning your tour of the region, consider staying at one or more of these wonderful places where your hosts have local knowledge of all the best vineyards in the region.