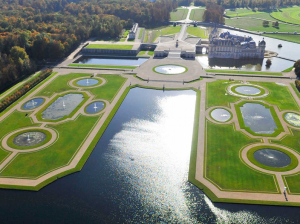 Hemingway wrote “wherever you go for the rest of your life it stays with you, for Paris is a moveable feast.” In all the many ways to imprint the memory of Paris forever in your life, there’s just been a new addition.

The airship or Zeppelin is seen as a somewhat mysterious historical mode of transportation, but it has been quietly making a comeback first as a giant billboard for publicity and more recently as new generation tourist attraction.

There is now a zeppelin operated by Airship Paris that takes off from the Pontoise Aerodrome, 25 miles north west of Paris, hovers towards Paris up to La Defense and then circles around over Bois de Boulogne and Versailles. It reaches an average speed 40 mph and hovers above the Parisian skyline at an altitude of 300 meters, about the height of the top of the Eiffel Tower.

The electric motors promise a noiseless experience as you drift along, and if the weather allows the windows can even open to have no glass pane between your eyes and the view.

Once it has reached altitude, the seatbelts can come off and passengers can walk around the cabin.

The flight takes about one hour at a cost of between €200 to €650 euros per passenger depending on the duration of the flight – not exactly an impulse purchase price point, but worth it for a very special souvenir of the moveable feast.