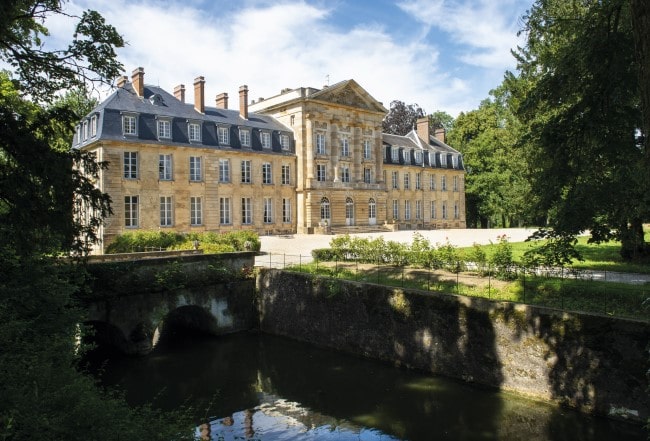 When Elisabeth and her husband Bill, from Baltimore USA, bought the grand château in 2005, it was run down and in dire need of restoration. Built between 1787 and 1789 on the brink of the French Revolution, the vast house included 27 bedrooms, over ten reception rooms and 114 windows, but had lapsed into gradual decline.

Elisabeth and Bill – who runs Agora Companies, an American publishing business with offices around the world including Paris – paid €1.4m for the property. The couple initially envisaged turning the château – which is about two hours’ drive from the capital and includes 360 hectares of farmland, 100 hectares of parkland, and lawned garden – into an elegant conference centre.

A Change of Direction

However, the global financial crisis in 2008 meant they had to change their plans. Alongside this, a bit of project mismanagement meant some of the refurbishment, such as the new wiring, had to be redone. “When you take on a big project, you had better be very, very present,” says Elisabeth, who then took over the management of the renovation work.

This involved replacing all the windows, re-doing the “new” wiring and reinstalling it behind the many yards of boiserie (wood panelling), repairing ancient brickwork including old chimneys, as well as re-plumbing the entire château.

Only once the major repairs were completed, which took three years, was Elisabeth able to start on her favourite bit: the décor and interiors. “I have been lucky enough to have decorated a smaller family home in France, have studied French history and enjoy visiting historic houses – all of which paid off when I had to take on this large project,” she says.

Elisabeth wanted the château to feel as though it belonged to a French family “who had been there a long time” and to have a “sense of history about it”, so she decided to go for a classic country house look.

Not Just a Lick of Paint

A highly qualified decorative painter worked on the main rooms. Choosing a style as close to the original décor as possible, he painted the dining room and petit salon in a pale lemony strié (stripe), while the grand salon was in a similar green strié. The wood panelling in the main bedrooms was ‘dragged’ (a technique in which a rag is dipped in a colour and literally dragged over the undercoat to create a mottled effect) and in a nod to contemporary taste, the walls were glazed in either pale blue or beige shades – softer colours than the brighter ones originally used in the 18th century when the only lighting was dim candlelight.

The need for a huge amount of furniture and furnishings meant Elisabeth became a regular at Drouot Auction House in Paris. Some of her best buys included the reproduction Louis XVI-style sofa in the grand salon and the “very well-made, beautiful”, 18th-century classic roll-top desk in the library, which sits opposite an elegant 17th-century bureau plat (writing desk). These are complemented by a second-hand and “not very expensive” leather sofa, which she picked up at Puces de Saint-Ouen flea market near Paris; some classical countrystyle oil paintings, also bought there, hang on the walls.

“Somebody once gave me a great decorating principal, which I have tried to use: always have a few things that are really good. They set the tone. And you can get away with the rest. It’s something that I adhere to,” she says.

The large book collection in the library “came from the family, so it feels very connected and it reflected my personal tastes and interests too,” says Elisabeth. “I love books and it’s also a very cosy space and I like that.”

The bedrooms are elegantly decorated © ELISABETH AND BILL BONNER

The Thrill of the Hunt

Because of the strong tradition of vénerie (hunting) at the château, Elisabeth also bought lots of traditional hunting items, such as mounted antlers, stuffed animals (trophée) and several paintings with hunting scenes. “It was the first time I had decorated with an eye for what other people would like and not what I would like,” she says.

Two paintings in the grand salon, which she is particularly pleased with, were picked up just by chance. “They were being sold with a jumble of furniture in one of the ventes courantes (uncatalogued sales) at Drouot. There was no advertising. I just happened to be walking by and saw them. They came out of a château in Normandy and I was the only bidder. And they are perfect,” she smiles.

A stylish 18th-century round table in the entrance hall and a pair of pretty pink Georgian chairs came with the house.

However, they were badly in need of some care and attention. “They still have their original upholstery,” says Elisabeth “and have been re-glued as they are not that strong.”

Elisabeth has spent money wisely. She has invested heavily in two very goodquality contemporary sofas by Beaumont & Fletcher in England in the grand salon. They are “very comfortable, well-designed and strong, and they need to be!” says Elisabeth, “People just throw themselves into them. And besides, if you had two cheaplooking sofas in there, it would just look very depressing.”

Another area where Elisabeth did not stint, was in buying quality fabric for the curtains. “They set a tone,” she says. A pair of embroidered silk, cream curtains with big pink flowery motifs in the grand salon, which also happen to be her favourites, were made in fabric from Colefax and Fowler; and a pair of lemony-green cotton linen damask curtains, which drape gracefully in the dining room, were from Beaumont & Fletcher. “Everything else came from the Rue du Mail, (the go-to street for contemporary and historic fabrics) in Paris,” she says. Elisabeth then found an excellent tapissier (curtain maker), in Courtomer village.

In the grand salon, Elisabeth invested in two top-quality sofas from Beaumont & Fletcher – which get a lot of use by guests © ELISABETH AND BILL BONNER

The main décor took two years to put together and was finished by 2010. “It was fun! I liked doing it a lot,” says Elisabeth. She estimates that the new curtains and furnishings cost just under €1m and the entire renovation, including building works and interiors was about €4m. “Even a small château is a money pit and this was a big one,” she says.

The château is popular with people who want a small, family wedding or celebration for up to 15; there is a farmhouse in the grounds available to let, also for up to 15 people. “My goal is to pay for the operating costs; I am not going to get back the capital investment unless I sell it to someone who is crazy about it, but I am trying to avoid running it at a loss,” she says.

Château de Courtomer is less than two hours from the D-Day Normandy Landing beaches, Deauville and Mont Saint-Michel and is surrounded by stunning Orne countryside, so makes a great base for exploring. “I often stay with my family. I like being in the château, which is why I have it,” says Elisabeth.