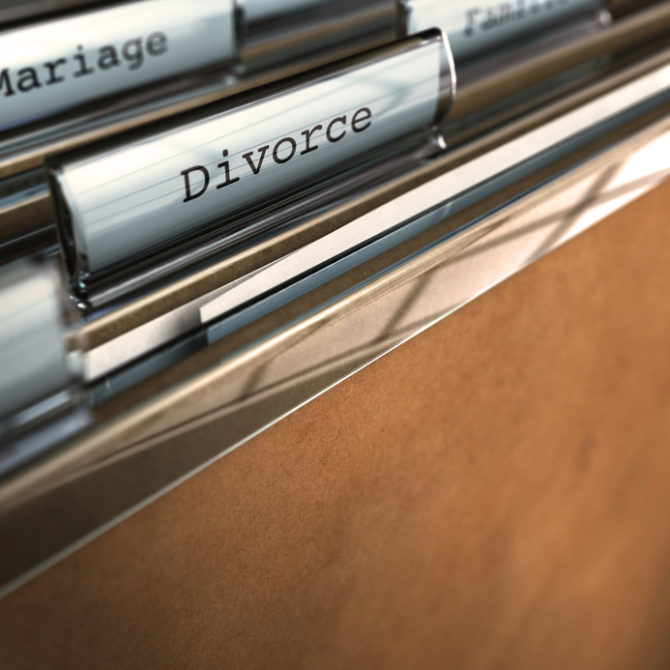 The financial consequences of a divorce judged in France can become apparent both during the divorce procedure proper, and again when the marital regime is “liquidated” and the assets divided.

Before reaching this stage, a certain number of questions should be considered:

Will French law apply to a divorce between foreigners?

Basically, yes. A French judge can apply a foreign law when rendering a decision. In practice however this rarely happens because the parties would need to convince the French judge of the contents of that foreign law. Most French judges will feel more comfortable working with French law.

There are basically four types of divorce procedure in France, one hostile, two amicable and one for a prolonged separation.

· The hostile procedure (“divorce pour faute”) involves a lengthy, often bitter battle, to demonstrate that the other party is responsible for the breakdown in the marriage.

· The simplest, fastest divorce is the divorce par consentement mutuel whereby the parties agree on everything (custody of the children, contact with the other parent, asset split, etc.). Before submitting a petition to the judge, the parties will have asked a notary to draft a document showing the agreed asset split or état liquidatif. (Note – The notary’s participation is only compulsory if the assets comprise real estate, if not the parties can draft the asset split themselves.) The judge will then simply order the divorce and rubber-stamp the asset split as submitted to him/her by the parties. If the judge considers that the asset split is unfair, he/she may refuse to approve the document – but this rarely happens in practice.

· The divorce accepté is put in place when the parties agree that a divorce is inevitable, but have not reached agreement on the on the finances of the divorce, ie the prestation compensatoire, and anything relating to the children custody and pensions). The judge will therefore make these decisions for them.

· A divorce procedure can now also be initiated if the couple has lived apart for two years (before 2005, the separation period was six years).

Except for the divorce par consentement mutuel, the procedure is a two-stage procedure.

Stage two: The notary will then proceed with the division of assets.

The party who does not have custody of the children will be ordered to pay financial support for the children even if their income is less than their former spouse’s income known as contribution à l’éducation et à l’entretien des enfants.

The judge assesses the amount due by calculating the needs and expenses of both parties.

The “impoverished” spouse also has the right to ask for additional financial support for their personal benefit. The judge will be asked to determine whether the divorce will create a disparity in the financial situation of the parties.

The stereotype example is that of the successful businessman whose wife has stayed at home to look after the children. After the divorce, the businessman will still earn a more than adequate income and can look forward to retirement on a satisfactory pension (probably from private sources). His wife, will, of course be destitute and so will ask the judge to award her financial support or prestation compensatoire.

There is no hard and fast rule for calculating the amount of this financial support. Some criteria are laid down in the Civil Code, e.g. duration of marriage, age of parties, respective income of parties, whether one party stayed at home to look after the children, etc.

Some financial guidelines have also been published, but decisions do vary between the courts.

Some clients have told me “I want half of my spouse’s income”, but in my experience, a French judge is more likely to award between one third and one quarter of the wealthier party’s income and/or pensions for marriages of long duration (more than 20 years).

The Civil Code states that the financial support should be paid as a lump sum.

In a recent case I have dealt with, the spouse was awarded a lump sum of €200 000. Both parties were nearing retirement age at the time of the divorce, the wife had given up work to bring the children up – and the wealthier party had an income of approximately €4,000 net per month. The marriage had lasted 30 years.

When calculating the prestation compensatoire the judge does take into account jointly held assets. When introducing a divorce petition, it is required by law that lawyer present the judge with an estimate of what their client will get in the split of assets procedure post-divorce. Indeed, this future sums to be had will be taken into account by the judge when calculating the prestation compensatoire.

It is also possible to pay the prestation compensatoire in kind. A husband who is ordered to pay his wife €200 000 by means of financial support may reach agreement with his wife that he will relinquish his €200 000 share in their €400 000 house. Although this would enable the wife to remain in the ‘family home’, it could leave her capital-rich, but income-poor.

It is not the French judge’s function to split assets – this is done by the notary after the divorce.

Obviously there is little difficulty in splitting jointly held assets (for example, a house held en indivision will be split 50/50 unless the original purchase deed indicates a different percentage holding).

It should be noted that the notary does not have judicial power. He/she can suggest the way the assets should be split, but if the parties do not reach agreement then the case will return to Court and only a judge can impose the division of assets.

The assets should be split in accordance with the matrimonial regime of the parties. However, this is easier said than done.

The marital regime normally corresponds to the regime applicable in the first country of residence after the marriage (unless the couple were obviously only living there on a short term basis), i.e. a couple who married in England and immediately moved to France to take up permanent residence will be considered to be married under the French “community” regime communauté légale unless they entered into a prenuptial contract.

This joint ownership rule applies even if only one spouse works and so all the assets (movables and property) have been bought from one salary only. Under French law these assets will be considered jointly owned and shared accordingly.

However, compensation may be claimed if, for example, one party sold a home purchased prior to the marriage and invested that money in the family home purchased after the marriage, i.e. if the personal contribution came to 30 % of the family home, that party would be entitled to ask the “community” to reimburse him/her 30 % of the sale value of the property on divorce.

The situation becomes more complicated if the parties consider that a foreign marital regime applies (e.g. for people who married and lived in the UK prior to moving to France). In theory the assets should be shared according to English law, which provides for equity to prevail.

To date, I have not met a French notary who has split assets after a divorce in accordance with a foreign law. Although this scenario is not impossible, it would involve demonstrating to the notary the contents of English law on asset sharing and ensuring that he/she has a good understanding of English (if the parties requested the application of English law).

In my experience, the French notary will proceed with the asset split in accordance with French law. And as long as both parties are reasonably satisfied, the question of the applicable law will not arise.

•Last updated in April 2016. With thanks to Marie-Caroline Escudie-Blachette, Associate Lawyer with Bright Avocats in Toulouse for kindly updating the information based on the original text by Julia Jones.

The information in this article is provided for informational purposes and does not constitute legal, professional or financial advice. We encourage you seek the advice of a relevant professional before acting on any of this information. Any hyperlinks to other resources are provided as sources and assistance and are not intended as an endorsement.

Sarah Bright Thomas moved to Toulouse in 1998 to integrate the Toulouse bar and set up the law firm Bright Avocats in 1999. She has been selected to the Toulouse Bar Council and is one of the 21 members of the Conseil de l’Ordre representing nearly 1000 lawyers in Toulouse. Sarah provides advice on company law, wills, conveyancing and is an active member of the ACE organisation (Association of Corporate Lawyers). Sarah can be reached at:   Bright Avocats 16 place Saint-Georges ,Toulouse +33 (0)5 61 57 90 86 Email: [email protected]