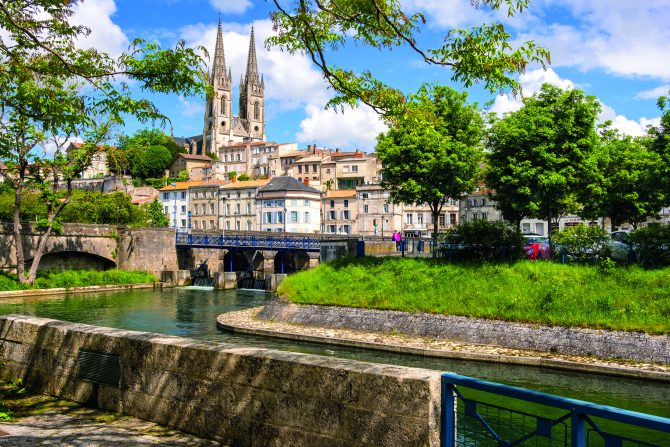 If peace and quiet in rolling countryside is your idea of heaven, then look no further than Deux-Sèvres. This département bordering popular Vendée and Charente-Maritime is literally translated as ‘two Sèvres’ – referring to the Sèvre Nantaise and the Sèvre Niortaise rivers that flow through it.

Often overlooked in favour of its coastal neighbours, Deux-Sèvres is a sleepy spot perfect for those seeking the authentic French way of life. This rural haven is easily accessible though. The ferry ports on the northern coast are within easy reach – Saint-Malo is just a three-hour drive, plus the airports of La Rochelle, Poitiers and Nantes are all nearby. It’s also ideally located for the beaches of the Vendée and Charente-Maritime and for this reason it’s worth considering if you’re thinking of setting up a gîte or B&B business.

Tourists come here for the popular Futuroscope and Puy du Fou theme parks in the neighbouring departments of Vienne and Vendée. More relaxing is an afternoon’s boat ride along its network of canals or across the Marais Poitevin marshlands, while the many Voire Vertes cycle paths that criss-cross the département are the perfect way to explore its pretty villages and historic nooks and crannies. The weather, too, is a big attraction. Deux-Sèvres enjoys higher temperatures than the north, with almost as much sunshine as the Mediterranean.

Happily for property hunters, prices in Deux-Sèvres are lower than in neighbouring départements – its median price being €1,170 per square metre, while Vendée comes in at €1,810 and Charente-Maritime €2,000.

Popular locations for house-hunting include its capital Niort, bustling Bressuire, Moncoutant and the medieval town of Parthenay. Add less-well-known spots to your list too – such as Saint Loup-sur-Thouet, Coulonges-sur-L’Autize and Secondigny. Prices here start as low as €30,000 for character stone properties ripe for renovation, farmhouses with outbuildings to convert cost from €130,000, maisons de maître upwards of €200,000, while you could be king of the castle for as little as €450,000.

Whether you’re looking for an affordable gîte business, a new place in the sun, or a weekend bolt hole, Deux-Sèvres is a great place to kick off your property hunt.

With thanks to our partner agencies in Deux-Sèvres

Buying a Property in France?

Dreaming of the rural life that Deux-Sevres has to offer? From planning your property-hunting trip to collecting the keys—FrenchEntrée is here to guide you, advise you, and hold your hand through the entire process. Ready to get started on your property search? Browse our property for sale in locations all over France. About to make an offer on a potential buy? Read our step by step articles on every aspect of the purchase process then check out our property articles for the latest news, insider tips, and expert FAQs.

Properties for sale in Deux-Sevres

How do Matrimonial Property Regimes work in France?