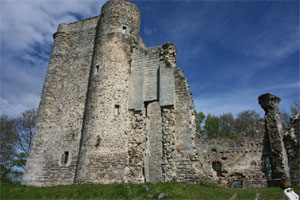 Montaigut le Blanc a small village about 10 miles from our village of Cluptat is a place we pass through every time we take the scenic route to our weekly major shopping spree at Gueret. I don’t know anything about it at all, other than I like its name, and the way it always seems to be a sunny and peaceful village. It’s almost like the ghost ship The Mary Celeste but in a village form of course, the reason I mention this, is because that every time we pass through it you never see anyone, but the few cars there, that do seem to change positions on the street at times.

The village has one road running through it, with two or three off shots leading to private dwellings and a small farm. The short main street boasts of a couple of ancient village shops, an even older stone built church, and a small garage, and like the rest of rural France all the grass verges are in good order, litter free and in pristine condition. The village itself sits neatly upon a small plateau surrounded by woodland, open pastures and arable farmland. Montaigut looks prosperous but sleepy. As the road the leaves the village and continues on its way to Gueret a smaller D road branches off to the left and leads the eye to hill with another small and ancient village clustering around the base with some cottages clinging to its steep sides, but rising majestically from the wooded summit is a huge stone ruin. 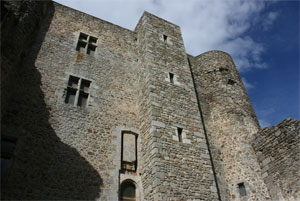 The first impression that I had was that the shape seemed to be a strange narrow and very tall rectangle, and that it was a derelict industrial building, looking so out of place on top of this steep sided hill. I’ve passed this stone edifice many times, and on all of those occasions I have promised myself to visit it and check it out, more out of curiosity rather than historical interest, but as our road to shopping led us away from the hill, it was always a next time situation.

Today however, I decided that the next time had arrived, and that we needed to know what the building was and what was it doing there, so as the left hand D road approached, we took the decision and veered off to the left leaving the road to Gueret and headed to the foothills to find a road to the summit. The road took us to the village at the base of the hill and from there we threaded our way through the labyrinth of narrow streets and ancient cottages until we ended up on a dirt track which lead to a small grassy clearing in front of a crumbling arch, that I assumed had once been the main entrance to this ruined building. Catherine and I walked into the “grassy courtyard” flanked on two sides by falling walls and crumbling masonry, the third side being none existent, but giving a magnificent view of the valley below, and re-enforcing the fact that this was indeed a castle with a dominant and commanding position of the area.

Turning to the fourth side of the enclosure behind us, which would have been the living quarters of the castle, we were quite taken aback at the perfect condition of the masonry, the shuttered windows and huge oaken door studded with heavy black bolts. And we were even more surprised when the heavy oak door slowly swung open and there before us stood an even more surprised old lady, dressed in a beige ski suit and clutching an envelope in a plastic holder, and then in total disregard for our presence, she started to pin the letter to the door. Catherine and I looked at each other with a slight embarrassment, thinking that we had invaded the privacy of this lady and had unwittingly trespassed into her life and private dwelling. Composing myself I said in my best French, “bonjour madam, je suis desolé”, (good morning, I’m sorry) intending to say for trespassing, and then ran out of French words, she smiled graciously and asked if we were English, I said “yes”
I explained that we were interested in the beautiful old building and would like to take some photographs, she said “oui, c’est ok” and asked if we would like to see the inside of the building, hesitantly I agreed, still feeling like the English invaders of yore. After a few minutes of conversation in broken English/French, we established that she lived the in the castle, and was a kind of curator, we never did find out if she owned it or just minded it. She did tell us it built in the 14th century and was originally built and owned by the then king of England, who gifted it to his French cousin. From my remembrance of English history, I did know that the English had taken ownership through our various wars large pieces of France, and this area was the main part of our conquering incursions. 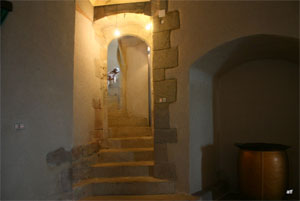 The ground floor was magnificent and had been restored to an amazing standard, and at first glance you could tell it was being turned into a kind of museum, with a fortune being spent on renovating the stone work and putting back the spiral staircases to the upper floors. Artefacts adorned the walls and floors, with scattering of ancient beautiful furniture and an incredible hand painted ceiling. Very modern lighting and lighting effects had been installed, giving a surreal look to this ancient historical building, but also creating a link to both the modern age and the middle ages.

Communication between us was difficult but both parties got the gist of the conversations, and then taking us back outside, we were then told of the history of the courtyard, and why the walls were missing. The French farmers, like the English back home over the centuries of dereliction had stolen the stones to build their houses and barns. We were then shown where the stables had been, and where the garrison block had once stood proudly above the stables, and where the drawbridge and portcullis was once housed. An hour passed quickly and we had to make our apologies to leave, remembering that the shops would be closed for the two hours lunch break 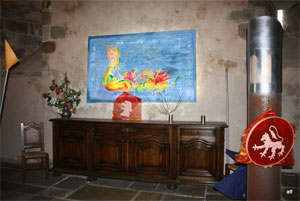 soon. So as we left the castle we promised the old lady only after she insisted, that we would return soon for the rest of the tour of the upper floors, and more of this important piece of French history, that was so deeply linked to our own medieval English history.

The conversation on the way to Carrefour for our shopping as you can imagine, was dominated by our impromptu and unexpected history lesson, and the well placed and fortified English castle in France.

•With thanks to Terry Ferdinand.

Catch Terry on on of his regular radio slots on www.bishopfm.com

All photos by T. Ferdinand