Life in the Côte D’or

First published: 30th May 2008 by FrenchEntrée 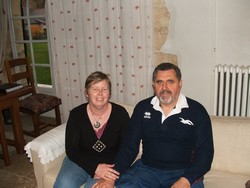 I was born in Brighton Sussex and my husband George was born in London but grew up in Hurstpierpoint West Sussex. After our marriage we lived in Brighton for a few years then we moved to Mid Sussex where our daughters grew up.

George was a Local Government Officer and after various jobs as our daughters grew up I ended up a Civil Servant. George retired in 1995 due to ill health and I retired in 2001.

George and I had spent many holidays in various regions of France and invariably we would look at property.

Some regions we felt were inundated with British people and what we didn’t want was to move to ‘Britain with the sun.’ On holiday in the Dordogne we decided to view a house, which we loved, but the estate agent explained the small town had three cafés; one for the Germans, one for the British and one for the French. We decided there and then it was not for us.

Our first visit to Burgundy was in August 1999 when we stopped at a chambre d’hôtes at Flavigny-sur Ozerain en route to le Drome and on the return journey at a chambre d’hôtes just outside Semur-en-Auxois. We knew we had to return, so the following year we booked a gite, near Saulieu.

While we were there we looked at some houses and it inspired us to find a second home in Burgundy. We returned to England and set about looking at our finances and how we could make the dream work. But six weeks after our return I had a stroke, it seemed our dream was to go on the back boiler for some time.

After an initial recovery I had a relapse and ended up in a wheelchair making no progress. Not to be beaten, we booked a long weekend in Normandy and found the problem faced by many disabled people in France, des paves! We then went to l’Alsace and it certainly gave me a new perspective on life; as a disabled traveller. I also joined my husband in retirement as there was no way I would be able to return to my civil service job; George had retired in 1995 due to ill health.

Early in 2002 we sold our large family home as our daughters had both left home and my husband found it too difficult to care for me, the house and the huge garden. We bought a small house in England as an investment and moved in with our daughter and her family to help with child care while they ran their business. 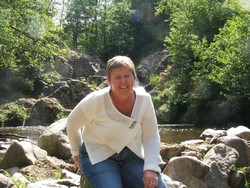 The view from Coral’s house in Burgundy!

We took a holiday to Burgundy in July of that year and while there found a house advertised in les petites annonces. We arranged to view the house and immediately knew it was what we needed. All the living area was on one floor, it had wide doors so I could use my wheelchair inside and the setting was perfect. We completed on the house in September 2002.

We began spending six months in England and six months in France. We both found the pace of life in France suited us and I began to be able to walk short distances. In 2003 our daughter and her family moved so we had to move too. We moved our things to our other daughter’s house and went back to France.

We arranged to have the house rewired and prepared it for the electrician. We also discussed what we should do regarding a permanent home. We then felt like idiots because the answer was staring us in the face, literally, we decided we would move to France permanently. It wouldn’t be until the May as there was a lot to be done before then. The rewiring of the house for a start and our elder daughter’s wedding at the Easter. We also had forms to fill out, letters to write and arrangements to be made.

On 15 May 2004 our son in law drove a van full of our possessions and we filled our people carrier with as much as we could manage and we set off for France. Our daughter and son in law stayed the weekend and then left us to it; we had arrived in France for good.

Our maire was delighted to have another two people in our hamlet as out of the 25 houses, in the hamlet, in winter only nine were inhabited, the rest were second homes! Luckily we had seen the area at all times of the year so the winter when we had in 2003/2004, when the hamlet was partially cut off.

In May 2004 I was taken ill again and spent two weeks in hospital at Dijon followed by four weeks at a rehabilitation centre. I felt very low at this point and then I was offered the chance to write for an English newspaper in France.
As part of my rehabilitation in England I had taken and gained a diploma in journalism, so I decided to use it. I wrote about events in Burgundy and it also meant I could indulge my interest in photography. As I was not allowed to drive George became my chauffeur.

In January 2006 George was seriously ill and had to spend some time in hospital at Dijon. It was a wake up call for us that our location, far from town with its facilities and commerce was too much. I was not able to drive and George not well enough. We started to house hunt again. 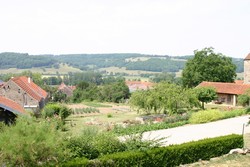 The view from Coral’s house in Burgundy!

We found a house four minutes by car from Venarey les Laumes and ten minutes from Montbard. The situation was perfect and we moved in May 2006. We sold the house we had in England as it was very difficult to be absentee landlords and it was obvious that the house would never be suitable for me to live in. This also allowed us to have work carried out such as rewiring and renovating one of the two bathrooms which are now complete. Like our previous house the neighbours are kind and supportive.

Early in 2007 we heard that our elder daughter had completed her Masters Degree and the graduation was to be in April 2007, we booked our crossing well in advance as she had obtained tickets for us. Then we had a telephone call from our younger daughter to say she and her husband were separating. The outcome was that she and the children would come and live with us in France. Although there was a lot she had to do it meant she would have to wait until we went to England in April.

We had a very busy schedule during our visit in obtaining permission for the children to leave the country and notifying authorities. After a wonderful graduation ceremony for our elder daughter a few days later we moved much of our younger daughter’s belongings and eventually loaded those, her children and her in the car to start their new life.

Moving to this house gave us the room needed to have them live with us and within a few weeks our daughter started work on the canal boats and the children settled into school and all are happy. Our daughter has met a Frenchman who has been influential in helping both our daughter and her children with the language and adjust to French ways of living.

My George and our daughter attend French classes at Greta in Montbard and while they do that I work. I no longer write for the paper but for the Internet and it is much easier when the children are at school and also when I am alone which is not often, but I can fit my writing around my health problems.

We have friends of differing nationalities and are part of a group that meet monthly to talk in English and French. I have been elected as a committee member of the MJC at Venarey le Laumes, which I am told will improve my French!

For us it is important to become member of the community and integrate. Our neighbours were sceptical when we first bought our house but when they realised we were permanent residents they were very happy.