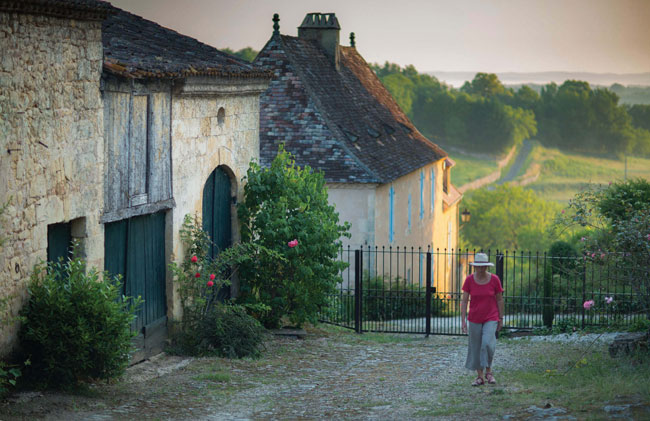 Annaliza Davis reveals the myriad delights of this south-western département, which is a confirmed favourite with British property buyers…

For many overseas visitors, the Dordogne sums up the French experience, with its green, undulating landscapes, magnificent riverside châteaux, historic towns, gorgeous villages and homes with sun-soaked gardens, which are perfect for lazily enjoying an aperitif or two. Historically, this area of south-west France is the most popular destination for overseas buyers as it offers a fantastic, very wide range of properties and the promise of a  completely different, more relaxed lifestyle than that of the UK.

The département of the Dordogne sits just inland from the Atlantic coast, within a triangle created by Bordeaux, Limoges and Montauban. The area is often referred to as ‘the Périgord’, the name of the historic province which covered approximately the same area, and it’s part of the Aquitaine-Limousin-Poitou-Charentes region. 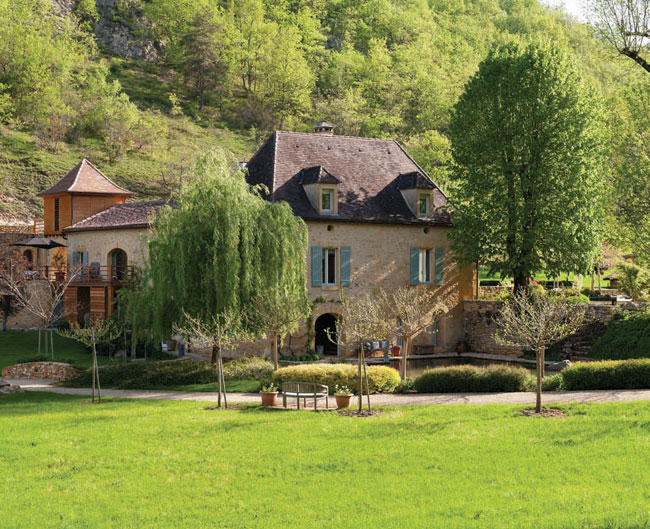 Historic buildings, such as this 17th-century mill, abound

The great attraction of the Dordogne is its quality of life: you have amazing landscapes with clean air and a temperate climate, plus good health and education systems. Although the area isn’t on the coast, the famous Dordogne and Lot Rivers each boast water parks and ‘beaches’, which are popular with locals and visitors alike. This verdant area also features acres of vineyards producing world-class wine, which matches beautifully with the delicious local cuisine.

The Dordogne is a large département, taking perhaps two hours to drive from north to south or east to west, so you need to allow plenty of time to explore when you’re on a property hunting trip – but that will be a total pleasure!

There are only around 400,000 residents in an area of 9,060km², and this low population density makes for a great feeling of space. There are no major cities in the Dordogne, and its ‘capital’, Périgueux, is a charming medieval town of only 30,000 inhabitants, with the other main conurbations being Bergerac (27,000 inhabitants) and Sarlat (10,000 inhabitants). All three have been designated Villes d’Art et Histoire (Towns of Art and History), but the real stars of the Dordogne are the area’s numerous charming villages, which offer picturesque views at every turn. 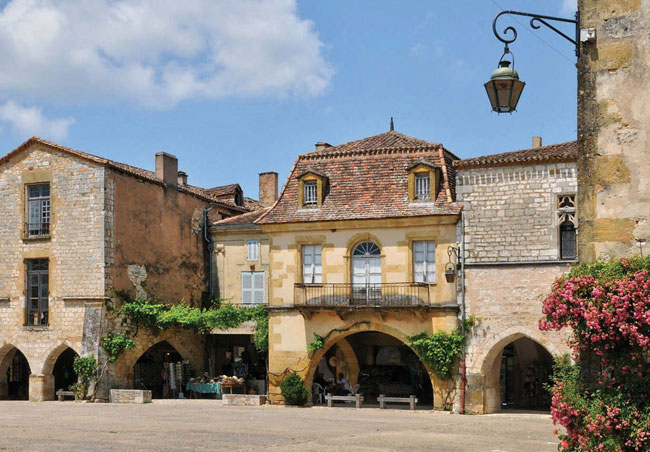 The different parts of the Dordogne are known as the ‘four Périgords’, and the département’s historic name is a corruption of ‘Petrocore’, the Gaulish word for the ‘four tribes’ who originally inhabited the area.

In the north is the Périgord Vert, named after the verdant landscape of meadows and rolling hills. Its main town is Nontron, which boasts characteristic townhouses and main square plus three châteaux, and is surrounded by bucolic farms.

In the centre it’s the Périgord Blanc, which is named for its white-clay soil and local limestone. There, you’ll find the area’s capital Périgueux, lots of Roman and medieval architecture, and a variety of property styles.

In the southwest, the Périgord Pourpre is named after the purple-hued vineyards and centres on the town of Bergerac. Its excellent accessibility via air and train, and its picturesque properties, make the area relatively expensive to buy in, compared to the other three Périgords.

Finally, in the southeast, there’s the Périgord Noir, which also known as ‘truffle country’, with its focal town of Sarlat. That’s is where you’ll find the Dordogne’s most beautiful châteaux and numerous tourist attractions.

Prehistoric Gems: The Lascaux Caves & Beyond…

In 1940, four children and their dog accidentally discovered one of Europe’s most amazing archaeological finds: a cave filled with incredible paintings dating back to around 17,000BC. 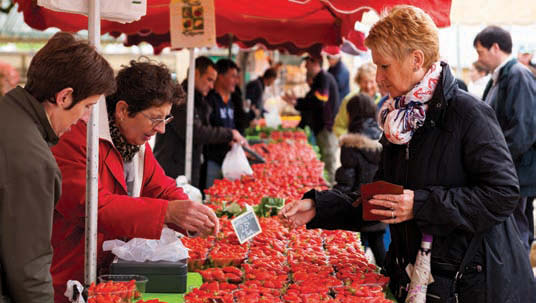 HEAVEN FOR THE TASTEBUDS…

Amazingly, wine was first produced in the area around Bergerac in 281AD, during Gallo-Roman times. Today, in addition to being bewitchingly picturesque, the area’s vineyards produce some of the best-quality wines in France.

As for food, the Dordogne’s stars are duck or goose dishes, black truffles and Cabécou goat cheese, plus seasonal fruits and vegetables. One look at the asparagus, mushrooms, chestnuts, strawberries or quinces which load the stalls of the area’s abundant markets and you’ll want to cook, or head for the nearest bistrot! 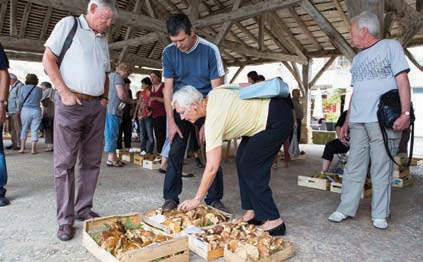 The original caves deteriorated so quickly in the first 15 years of public viewing that exact replicas were created nearby, and they’re so authentic that when you visit, you quickly forget that it isn’t the original. The main caverns at Lascaux are bigger than a football field, with some paintings 16 feet tall – no wonder they’re called ‘the Sistine Chapel of the prehistoric world’. To visit during the summer, book beforehand by calling +33 (0)5 53 51 96 23, or next to the tourist office in Montignac. Further information can be found at www.lascaux.culture.fr

Almost everything you read about the Dordogne will refer to its ‘relaxed pace of life’. Even the region’s capital, Périgueux, retains an old charm, with winding alleyways and cobbled squares, where the former houses of wealthy merchants are now quaint boutiques and restaurants.

For tranquillity and space, your best bet is the Périgord Vert during off-season, as it’s a rural area with wide-open spaces and few large towns. The hustle and bustle is in Sarlat, Bergerac and Périgueux, especially during highseason market days. Of course, the Dordogne can get very busy during the summer – if you aren’t a fan of crowds or heat, avoid mid-July to mid-August. 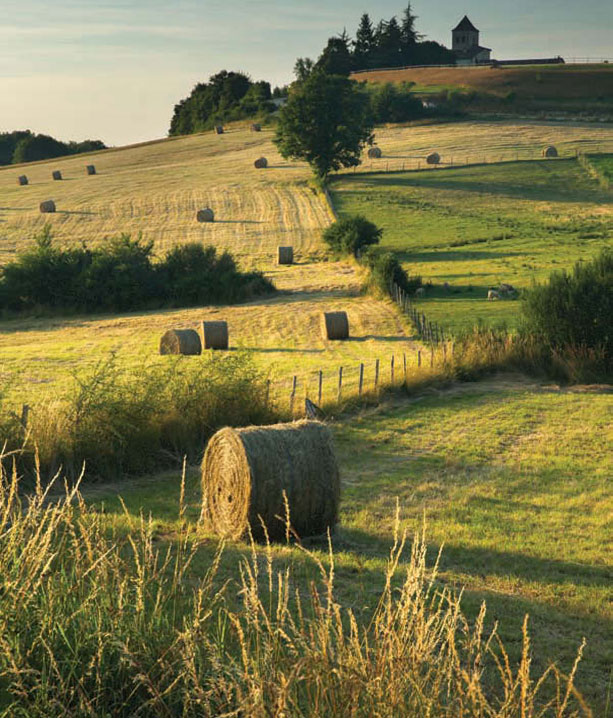 In the Dordogne, the summers are hot and dry, typically 25-30°C. Overall, the climate is temperate and daytime rain is rare during the summer, although evening storms are fairly common. The winters are mild and rather wet, although some areas do experience sub-zero temperatures.

The weather towards the north-east of the Dordogne is significantly cooler and wetter than in the southwest, and there can be variations within quite small areas, even during the course of a 24-hour period. As one local resident comments, “if the day starts off with rain, it’ll be dry in an hour, and there’ll be sun by drinks time!”

For a UK comparison, the area enjoys 300% more sunny days per annum than Bristol and 25% fewer of rain.

By road, the A20 Autoroute means that Paris is under six hours from Périgueux, the port of Calais is eight and Le Havre under seven. If you’re taking the train, then  Paris to Périgueux takes around four hours, and there are also SNCF stations in Bergerac and Sarlat.

What are the main types of property in the Dordogne?

The Dordogne is an area of France where you’re very likely to find exactly the home you’re looking for, whether that’s a modern, easy-maintenance house or a barn-conversion with acres of land. Yet there are also certain charming property types which are particular to the area…

Property pricing varies considerably from one part of the Dordogne to another. The Périgord Vert is the most affordable area, particularly the north and north-east areas bordering the Limousin, which are perfect if you’re seeking a decent amount of land on a budget. The southern areas, namely the Périgord Noir and Périgord Pourpre, are more expensive, but still favourite spots for running a gîte or B&B business, due to the many attractions close by.

If you hanker after sweeping, vineyard-filled landscapes, look south of Bergerac, but should woodland, rolling hills and small valleys be your thing, head towards Ribérac. For a regular cultural fix, keep close to the A89 Autoroute between Périgueux and Bordeaux, which gives easy access to the area’s larger towns and the train to Paris.

Brits in the Dordogne…

You might have heard this area called ‘Dordogneshire’, as it’s popular with British buyers, so there is little doubt that you’d come across other expats, notably in Eymet, Verteillac, Ribérac and Bergerac. That isn’t necessarily a bad thing, as when you’re relocating, having other Brits around, all of whom have ‘made the leap’ and can offer sage advice, will help you to settle more easily into your new life.

However, English-speakers are still in the minority! If the climate, setting and people draw you to settle in the Dordogne, you can certainly make a wonderful new life for yourself by integrating with French-speakers and becoming a genuine part of the local community.

A decade ago, the Dordogne offered countless bargain properties in need of renovation. However, the area’s success with foreign buyers means that there’s now rather a shortage of affordable renovation properties. That said, if you look in the less expensive areas and stay in touch with local agents, you can still find a bargain.

To find your dream home in the Dordogne, you need realistic expectations, in terms of the property type and location. Prices vary greatly between locales, with the properties north of Bergerac tending to be more affordable than those in the south of the Dordogne.

Given that the Dordogne is a tourist hot-spot, investing in a property as a holiday home is certainly a sound option. Buying a property that you intend to let, permanently or for part of each year, is a great idea, if you rent it out during the high season of mid-July to mid-August, when you’ll get the best rates. Out of high season, you could then use the quieter but still-warm periods, such as June and October, for your own periods of Dordogne magic.

Do you feel that Dordogne is the region in which you’d love buy your French dream home?

If so, you can browse properties for sale in the area and we also have access to many more – if you’d like the details of those or want help with your search, drop the FrenchEntrée Property Team an email via [email protected] or call them on +44 (0)1225 463752.