Living the Dream in Deux-Sevres

First published: 1st May 2009 by FrenchEntrée 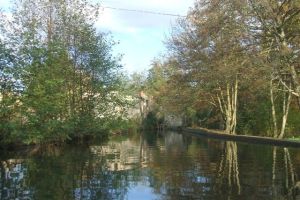 Some years ago, whilst perusing properties for sale via the Internet, Gordon espied an attractive watermill in Poitou. Le Pont dl’Arche. He downloaded the details from the agent’s website, did nothing further, and they lay around his study collecting dust.

He continues the story….

Two years ago I’d foolishly asked Joc the question, ‘What would you like to do when you retire?’ ‘Live in France,’ came Joc’s reply. ‘Well, it will have to be somewhere as nice as here. So that means a river, a wood, sheep and some hills.’

Google replied: ‘Le Pont D’Arche, beautiful watermill of X1century, 2 hoses, dependence, spice of land, islands, edges and trees. Vendée coast excessible’.  April of 2002 saw us in Cuchet. The Charente was at the end of the lane and the market town of Ruffec, with its immobiliers, was a ten-minute drive. Can’t be that difficult, with all these rivers, to find somewhere by water, can it?

We discovered that property by a river was likely to be a watermill. The ones we saw were too large (one was almost a village), needed too much work, were scarily situated in the middle of rather large rivers (some ‘excessible’ only by boat) or were out of our price range. Several eel traps later I went to bed one afternoon saying, ‘I think we’ll have to go back to that town house we saw by the Vienne in Confolens.’

When I woke up Joc said, ‘We have an appointment tomorrow to see two watermills, in our budget but some distance away.’

Bleary-eyed we meet Sue on Super U’s car park in Sauzé-Vaussais. An interminable journey brings us to Parthenay. We pick up the immobilier who says he’ll drive us the next part of the journey, omitting to mention his Formula One background.

‘It’s Pont d’Arche! ‘Don’t be silly. That was YEARS ago.’‘It is, it is.’‘It’s similar. There’ll be lots of mills on the same design.’‘Look at the willow!’ Only last night I’d thrown the picture away. We get out of the car shakily.

The owner is very proud of the third house, a barn he has been renovating. He insists on showing this to us. It’s open and the air is cold. Only one man was seriously injured during the restoration of the roof, he says. At last we cross the courtyard to the Miller’s house. Perhaps there will be coffee inside? As soon as we’ve skipped over the three steps that form the entrance we exchange a glance. This is it. 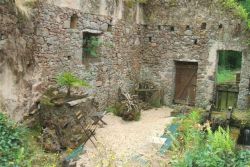 The Mill House is warm and cosy. Then we see the room to be converted – a grenier linking it with the second house, called the apartment. Over the centuries the floor has been raised and lowered. At the moment there isn’t one, though there is an abandoned exterior doorway halfway up the wall. The nesting swallows don’t seem to use it, preferring to skim through fist-sized holes in the masonry.

‘Won’t cost a lot,’ says Sue. ‘A couple of thousand euros, if that.’  We believe her. She must enjoy clients like us. Then we see the apartment. It smells of mouse. ‘This could be let out, to give you an income,’ smiles Sue, ‘with a bit of work.’  We nod vigorously. Rather a lot of work.

We descend the Miller’s ladder to the ground floor.‘That’s a good sign,’ says Sue, sniffing the air, ‘a nice dry cellar.’ We heartily agree.‘There are two-and-a-half acres with river frontage, eight small islands and some trees, over there.’ She gives a generous wave towards the upstream jungle.

On the way back she suggests lunch in Parthenay. She is so nice! Afterwards we begin the return journey to Super U’s car park. We start chatting – we really, really like it. Sue does a super U turn and we are back in the immobilier’s office. The price has dropped from when we first saw it on the internet but it’s still a bit too expensive. We are advised on what to offer. We await the response nervously. After all of two minutes, during which we hear the phrase ‘liquide!’ (something to do with the water, we assume) our offer is accepted.

Sue asks us if we’d like to go home with her for a glass of champagne. It’s dusk when we get back to Cuchet. Our cats are waiting under the lilac trees. They watch bemused as I rummage in the dustbin.

We’ve signed up to buy a watermill without a survey and having seen it only once on a bright May morning. We’ve not asked any of our usual questions concerning flooding, renovations, rights of way. We don’t know if there are walks nearby or where the shops are. Northern Deux-Sèvres is a three-hour drive from Cuchet and not in a direction we had been considering. It might be colder or wetter up there. We are meant to be taking things easy, off-loading, de-stressing. We can’t even remember the layout of the place. It’s going to swallow practically all our money.

On the big day the notaire pointed out that we must exercise daily our droit de passage to the poplar plantation. The plan de cadastre reveals a further two fields and an orchard which no one had thought to mention. Sue did not turn up. We rang her once or twice but our calls were not returned.

We arrived at the Mill in July. The owner came down to deliver an enormous bunch of keys. He seemed to indicate that the sluice gates holding the river were dodgy and that the TV reception wasn’t good. He smiled to indicate we’d be too busy to watch it anyway. How right he was.

It was a wet autumn. We’d noticed the deep ditches running alongside the roads.‘That’s a clever idea,’ Joc said. ‘Keeps the roads dry.’ ‘Oh, yes, the levee! Took the chevy to the levy . . .’

On returning from a shopping trip one particularly rainy day our neighbour was waiting for us. ‘Elle va déborder!’She is coming to board? Who? He almost pushed us over as we entered the foyer. ‘Posez les meubles en haut. Voyons !’ He picked up our picnic chairs and ran upstairs with them. Inondation.

We watched the river rise, consume the island. We were excessible only by boat. On the bridge someone was filming. ‘Try not to go to the loo,” Joc said. We remembered the cat litter, still in the barn, several fathoms away. Happily, the cats slept throughout the excitement. They didn’t want to go out, didn’t even wake until, after five hours, the water receded. We helped it on its way with a royal flush.

Seven years later the barn is still unfinished though we hope to complete it this year. We spend a lot of time in the once floorless grenier and now live in the apartment. The Mill House is ideal for family and friends. We have developed a magnificent potager in the orchard and are practically vegetarian. The poplars provide all the wood we’ll ever need to burn. 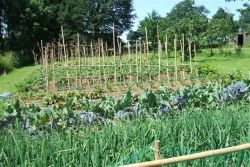 Like most people we do more or less what we did before. Our hobby is writing; since we came to live in France we’ve published several poetry pamphlets, written a number of plays and stories and a writer’s manual. In 2007 we launched two annual competitions, under the title of Segora, the old Roman name for our village. We found our ideal home where every day offers inspiration’.

For details about their creative writing and poetry courses email Jocelyn & Gordon Simms .