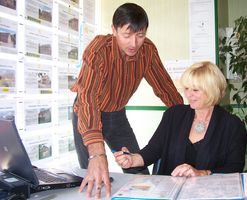 Exploring this popular part of France

The Mayenne Department offers some of the most attractive properties in France at prices often well below the national average.

From renovation projects at under €30,000 to the cheapest chateaux in the country, you’ll find them all here.

Increasingly popular with British buyers, the area boasts fabulous transport links to the UK by air, road and rail.
Paris is less than two hours away and you’re within a day’s drive or train ride to Bordeaux or the Mediterranean coast.

Two principal factors affect the Mayenne housing market.
Firstly, thanks to its history, the area offers an abundance of vacant properties, ripe for renovation. Secondly, forward-thinking local officials have brought the Mayenne into the 21st century, meaning the area now attracts jobs and investment from throughout the world. The result is a strong local economy and increasing demand – and prices – for property.

A local estate agency with an in-depth knowledge of this beautiful area is La Licorne.
Run by husband and wife team Eric and Beatrice le Goff, the agency has offices in the towns of Bais and Montsurs.

La Licorne has an excellent reputation throughout the Mayenne and has exactly the types of properties British house-hunters are looking for.
Customer service is key to La Licorne’s success.
Beatrice explained: “We know how difficult it can be for people coming to France from the UK, so we can help with things like arranging a phone connection and dealing with the electricity company.”
The area also offers some of the best value for money in France.
The low prices even apply to the most prestigious of properties with chateaux often available from around €400,000. That is very low compared to the rest of France.

In fact, the Mayenne boasts a large number of chateaux thanks to its proximity to Paris and the French Revolution.
The capital’s wealthy began arriving here after 1789 (and subsequent revolutions) to escape violence within the city.
Another revolution to have an impact was of the Industrial type.

The le Goffs outside their office in the town of Bais

From around the 1850s, much of France was changed forever in the race to modernise manufacturing.
Except in the Mayenne.
Local landowners preferred the old tenant-farmer system to ensure a good living. However, it didn’t do much for the tenants.
Therefore, the Mayenne witnessed large-scale depopulation as locals moved out of western France to find work in booming industrial towns elsewhere in the country.

However, the population is now climbing with advances in technology, more jobs available and many towns developing an industrial estate.

The development of an excellent education system here means that students no longer have to travel to Rennes or Paris.
The Department also has one of the highest levels of families with young children in France.
That’s why many are predicting a bright future for the Mayenne and why the time to buy property here is now.

Find property for sale in Mayenne