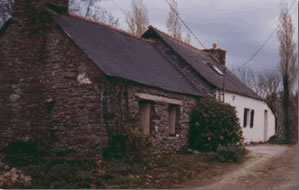 We started to look for houses in Brittany when our kids were quite small but never really had the time or finances to follow this up. In February 2001, after our kids had left home, we decided to go again to France and look in earnest. We rented a gite in Collorec and used this as a base. It was freezing cold and this was the first week of the “season” for the gite so it hadn’t been aired and the wood for the fire was so damp that it gave off steam as it burned!

We had made an arrangement to come over and look at some properties offered by an English based company and duly arrived at their base near Guingamp. They had several seemingly interesting properties and off we went with the agent. I had to drive, which was a surprise and the agent gave me directions. All the properties were either falling apart or were huge renovation projects in remote areas. It was an experience and we certainly covered some miles but none of the properties were what we had in mind.

Undeterred, we went solo and did a tour of the notaires and agents in the towns around Collorec. Each day, we went to a different estate agent or notaire where we would be asked to sit and wade through huge photo albums of properties. Eventually we arrived in Carhaix and in the office of Maitre Bruno Bernard. Here we spotted several properties and armed with bunches of keys and a trusty Michelin map, off we went. After several false starts we found our cottage in a small hamlet near Cleden Poher. The old lady who had owned one half of it had had a fall, broken her shoulder and subsequently died from complications. The cottage was in two parts, a “modern” rendered half and a damp, neglected stone half. They were two separate buildings with a common wall. We knew as soon as we opened the door that this was a terrific bargain.

Opening the double glazed door, we entered the main room. This was the living room / kitchen. In the notaire’s blurb, it said “with corner kitchen”. All we could see was a very greasy sink unit and a grubby mark on the wall showing where a cooker had once stood. The upside was that the room had a concrete floor, an ancient woodburner in a stone hearth, a new chauffe eau with new electrics, a shower room with a high, disabled persons toilet and a superb shower and washbasin (the black gothic grout had to go!). It had also been dry lined, had exposed beams and had a tiny double glazed window! All this for £6000.

The other half had very old exposed beams and exposed stone walls and a great natural slate floor. New windows had been put in many years before and they were showing their age. The fireplace was huge and open to the elements, which meant every time it rained, the hearth and everything else nearby got drenched! The roof wasn’t bad but the humidity from the open fireplace had caused the chipboard floor to expand and it was like a giant weetabix! Somebody had decided that this side of the house needed some modernisation and had added a door and a cellular tile wall enclosing a toilet and washbasin. This half of the house was for sale for the princely sum of £4000. We dashed back to the notaire and offered the asking price. The lady in the office was quite shocked and asked us if we wanted to offer less!!!!

Time passed as the offer was accepted and the documents drawn up. We signed in late July after spending a few nights camping on a campsite at the side of the Nante-Brest canal at Chateauneuf de Faou. Finally we signed and it was ours. A quick nip to the agricultural DIY shop, Espace Emeraude and 50kg of crepi later, the cottage looked much better! There was no access to the loft from the kitchen, well, only by trapdoor and ladder. The stone half had the stairs in it so one of our first tasks was to find a mason to knock through both downstairs and upstairs, difficult when the walls are 80cm thick! Fortunately, the chap we had rented the gite from in Collorec was a retired builder and he put us in touch with a master mason, “Robert”. Robert spoke Breton and French, sometimes both! He happily chatted in Breton with our neighbour, an old lady of 85 and duly knocked through for us. I began laying tiles onto the concrete floor in the kitchen and this is still not finished, 3 years on! The sink unit was removed and an electrician retained to wire the new kitchen that I put in (MFI flat-pack brought over in our French trailer, christened “Juliette!)

Having two adjoining rooms was great and Robert was employed to build us a nice new granite hearth and fireback to compliment the new woodburner, bought out of season at a considerable discount! The toilet in our lounge had to go and I set about this with a club hammer and big smile! I had to chisel out the toilet pan, cap the waste pipe and use spare slate to patch the floor but it looked good when I had done it. Next job was to employ a carpenter to remove the existing mountain goat staircase and replace the floor / ceiling. This done, we sought out a master craftsman who created for us a “made to measure” staircase in some exotic timber only known to French woodworkers! We now had a bedroom, well, sort of. It had been insulated with large sheets of polystyrene, which had to come off for me to spray the timbers with preservative. This done, we organised two new velux windows and planned out how to insulate the bedroom in something less combustible. Rockwool was chosen but on reflection, that skinny silver bubble wrap stuff would have been much easier, just staple it to the rafters!

Downstairs, the exposed wall with the windows in was full of concrete bodging where the concrete lintel for the windows had been put in. There was no point in keeping this as a feature. This had to be studded and plaster boarded by me and we had two new double glazed windows put in too. Once this was done, our lounge really did look like a room! Furniture from the UK was delivered and voila!

All we need now is to insulate one half of the roof and continue with the fitting of the lambris, I had to stop fixing this in place because of my heart attack, (due to my sloth lifestyle, not working in France!). Anyway, we almost have two and a half rooms. This only leaves half a bedroom, an en-suite bathroom and our bedroom to do, Oh, and the Pente to be re-roofed and made into an office and a doorway made through…….. It will keep me out of trouble for a few years yet.