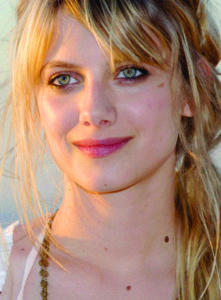 Mélanie was spotted for the first time by Gérard Depardieu while visiting the set of ‘Asterix and Obelix’ with a friend. He asked her if she wanted to act in movies, to which she replied ‘why not?’ Mélanie made her film debut shortly after in ‘The Bridge’, a 1999 drama co-directed by Depardieu and Fréderic Aubertin.

I know the face…

Mélanie’s most famous role to date is that of Shosanna in Quentin Tarantino’s 2009 revenge hit, ‘Inglourious Basterds’. Of Jewish ancestry, it held personal importance for the actress, claiming ‘it’s been my dream to kill Hitler since I was four’.

Where will we see her next?

Two films starring Laurent are scheduled for release in 2015 – ‘Boomerang’ directed by François Favrat, and ‘Eternity’, where she will act alongside fellow French superstars Audrey Tautou and Berenice Bejo.

Laurent’s father is a voice actor best known for his role as the voiceover for Ned Flanders in the French ‘The Simpsons’.