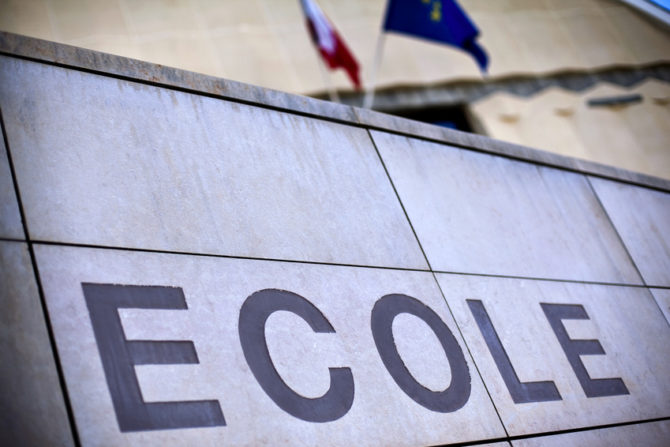 French state education is well-organized, well-funded and with generally average to high standards.

Since 1967, school has been compulsory for all children between the ages of 6 and 16. The school-going population of about 12 million pupils is educated within a unified system, the general structure of which (schools, lower secondary schools and lycées) was gradually established in the 1960s and 1970s. Since the 1970s, France has also witnessed a very striking development in preschool education: all children aged between three and five years attend nursery school.

Private and State Schools in France

A comprehensive network of private schools, including international schools, complements the state system. Most of the private schools are stated funded and supervised by the Ministry of Education. Private schools account for about 15 per cent of the pupils in primary education and 20 per cent in secondary education, proportions that have remained stable in the past decade. Many are Catholic schools, with partnership contracts with the State (which pays the teachers). Private schools with no such contracts account for fewer than 50,000 pupils, and are dependent on considerable financial contributions by families.

Although the curriculum and processes in state schools are reformed regularly, the system does benefit from a high degree of consistency across the country, and children of the same age can be expected to be studying the same subjects and textbooks at the same time. The recent introduction of the seven skills ensures a systematic approach to teaching. Keep in mind that most private schools also adhere to this national curriculum.

Reforms introduced in 1989/90 divided nursery and primary schooling into cycles (cycles pédagogique). There are three cycles, each of three years duration, designed to provide the ability for pupils to improve at their own speed and reduce the number of repeat years. The current programmes are:

This relates to the first two years of Nursery School (Maternelle), ages three to five.

This relates to the final year at Nursery School and the first two years of Primary. The course levels are known as GS (Grande Section), CP (Cours Preparatoire) and CE1 (Cours Elementaire 1).

See our article on Nursery and Primary Schools in France.

Flexibility has deliberately been built into the curriculum so that a child can move on to the next cycle even before the typical three year period has elapsed or take longer if need be. However, holding students back a year or having them skip a grade remains the exception.

In 2005 the government introduced the seven skills or competences that underlie teaching in primary and secondary school.

Children are expected to have a command of these competences when they leave collège. The seven skills are:

• Mastery of the French language
• Practical knowledge of a living, modern language
• The basic elements of math, science and technology
• Familiarity with the common techniques of communication and obtaining information
• The humanities
• Social and civic responsibility
• Autonomy and initiative

If pupils acquire these skills, then as well as being successful at school, once they leave school, they should cope well in professional life, and fulfill their potential.

This is the first time since the Jules Ferry laws of 1882 that the State is specifying exactly what children should be learning at school. And to see the job through, Robien has appointed a Committee of Orientation, with each competence overseen by a member of the committee. Over the coming year the team of seven experts will devise the framework for introducing the whole project successfully into schools.

There are two evaluations during primary school to ensure that students are grasping the competences, the first at the end of CE1 looks mainly at the standard of reading and writing; the second at the end of primary instruction, CM2, includes grammar, elementary calculations and the four basic operations (addition, subtraction, division and multiplication). The third evaluation takes place at the end of collège (lower secondary school) where the “brevet” assesses pupils on all seven required competences. A personal booklet allows the pupils, their family and the teachers to chart the progressive acquisition of the competences.

The French education system is highly oriented towards structured learning, with emphasis on traditional teaching techniques designed to help pupils attain required standards and pass exams. With the French government’s concern that students acquire the basic literacy and numeracy skills before lower secondary school learning comes to an end, the emphasis on math, reading, writing, science and French language is unlikely to change.

Differences Between the French and UK School Systems

Criticism of the system from British parents tends to center around the rigidity of teaching methods and the lack of opportunity for creative self-expression when compared to some of the more liberal education systems adopted by the UK.

Children are likely to encounter more homework and high expectations from teachers. On the other hand many children in nursery school and primary school, particularly those enrolled in schools outside of large urban centers, enjoy the benefits of small ‘family atmosphere’ classes with children of different ages learning and playing together in a supportive environment.

Inevitably in a stricter learning environment, it will be evident more quickly that some children are falling behind. It has been said by some that children who fall behind are not necessarily given as much time by their teachers although one should set against this the fact that most schools can arrange special learning programmes for children experiencing difficulties.

Children who fall behind may also be expected to repeat a year in order to catch up, although there is now more flexibility in nursery and primary schools with the introduction of the new reform-based educational cycles. One of the long-term benefits of the emphasis on exams and results is that almost every child will end up with the opportunity to study for a trade, diploma or degree.

In general schools, the direction taken (repeating a year, moving to a higher class, changing streams) involves a procedure based on dialogue, in each school, between the school institution (teachers and administration) and the families and pupils. Teachers give their opinions at staff meetings (the ‘conseil de classe’), and parents of pupils can appeal a decision they do not agree with.

Depending on the level of education, parents can demand that a pupil be moved to another stream rather than repeat a year, or ask that he/she repeat the year rather than move to an unwanted stream. Each school has a specialised group of career guidance instructors to help pupils, parents and teachers solve the problems they encounter.

The ‘class de découverte’ is also a uniquely French experience where the school class moves to a new venue, perhaps to the ski-slopes or the sea-side for a week or longer in order to expand the children’s horizons.

Although effective in many respects, French state schools tend not to provide the same level of extra-curricular activities that children from the UK and other European countries might expect. This is particularly the case with Arts, Drama, Music, and Sports. It is left up to the parents to decide in which direction they wish to spend their child’s time (and their own money) to develop such activities. Fortunately there are many clubs and associations outside school which cater for this demand. Parents should ask at the Mairie or the Syndicat D’Initiative (or Tourism Office) for the names of local groups and associations to find out what is available. In some areas the use of sports facilities such as tennis courts is subsidised.

The French education system is divided up into Nursery Schools (Ecole Maternelle), Primary Schools (Ecole Primaire) and Secondary Schools commencing with College (College) until age 15 when the next step is decided by examination. The top students will be able to attend a High School (Lycée) to study for the Baccalaureat. Those who don’t attain the necessary grades at this stage may follow more vocation educational options – see Secondary Schools. Around 80 per cent of children continue their schooling beyond the age of 16.

The vast majority of pupils attend schools supervised by the Ministry of Education but approximately 100,000 pupils (mainly those suffering various forms of disablement) attend Ministry of Health medical-social institutions (technical and vocational courses) and some 300 000 others, of at least 16 years of age, undergo apprenticeships (employment contracts) which, since the 1987 reform, prepare pupils for all types of vocational diplomas.

There is also specialised or adapted education which is often intended to integrate children into primary and secondary schools, for instance school integration classes (CLIS) and adapted general and vocational sections (SEGPA), which are given in special schools such as those in health institutions. This type of education concerns approximately 5 per cent of children in a given generation, and is aimed at allowing them to achieve a minimum level of qualification, the vocational training certificate (CAP).

Any parent wishing to move their child into the French system will need to be prepared for the challenge of dealing with learning a new language for everyday use. See our article on settling English children into a French school.

Questions about your local schooling should be directed to your Mairie in the first instance. More information (in French) on French education can be found at www.education.gouv.fr or by contacting your French embassy.

Finally, if you like to get your information right from the top you can always contact the Ministry!