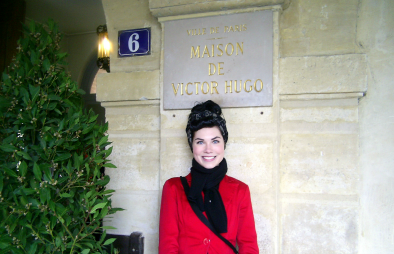 Ever since my first day of French class when I was 13 years old, I knew I wanted to live in France some day. This beautiful language and intriguing culture had immediately captivated me. The opportunity came when I was twenty years old and studied abroad in Paris for a year at the Université de Paris-Sorbonne, Paris IV.

Not only did I have the opportunity to fulfill a dream, I also had the chance to discover my French heritage. As the granddaughter of a Frenchman who gave up his language and culture to become American, I always wondered what it meant to be French besides having a last name no one could spell or pronounce. Studying abroad in Paris for a year gave me the opportunity to connect with my French roots by staying with my grandfather’s sister whom I called Tatie (‘Auntie’ in French). During my time in France, I met all long, lost family members, poured over old photographs and listened to old family stories between going to college full-time. Experiencing French culture and language hands-on helped me understand its nuances and values of being of French heritage.

My biggest challenge and difficulty in France was not being able to express myself in the educated and mature manner to which I was accustomed for the first four months. All those years of studying French in high school and college did not prepare me for speaking French on a daily basis or in a college classroom. It was extremely frustrating to be 20 years old and know that the average 5 year old in France spoke better French than me. It was also disappointing that my grades did not adequately reflect my academic abilities at the Sorbonne because of this language inadequacy. But like anything in life, practice makes perfect. Although I wasn’t super fluent in French after four months, I was much better than I had been and everything around me started to make sense.

My newfound language skills ushered in an improvement in grades and a better understanding and appreciation of French culture for the second semester. As my language skills continued to grow by leaps and bounds, I was understanding and able to better communicate more and more each day. Being over the transition to a foreign language, culture and college experience helped me to completely settle into Parisian life. Occasionally, I made language errors like confusing ostrich (autruche) with Austria (Autriche), but who doesn’t that happen to? It took me 6 months but I finally felt like a true Parisian. The sad part is that when I finally felt this way, I only had a few months left until it was time to go home to the USA. Once I was back home, I spent everyday remembering my time in the most beautiful city on Earth: Paris.

About the author: Andrea Bouchaud is a writer on the topic of studying abroad and author of Twenty in Paris: A Young American Perspective of Studying Abroad in Paris available on Amazon. You can follow Andrea on Twitter at @twentyinparis.