France: “…the country where the pig is most valued” – Jane Grigson, Charcuterie and French Pork Cookery.

If you enjoy the food of France, it is likely that you have shopped in the fantastic butchers and charcutiers here. I am frequently in an uncomfortable position, in that I have to try all sorts of delicious charcuterie for professional reasons. This is uncomfortable because I am unable to get total enjoyment from food that has been produced in a way that was cruel to the animal which I am eating. We all know by now that most pork nowadays is produced in repugnant ways, even in France. 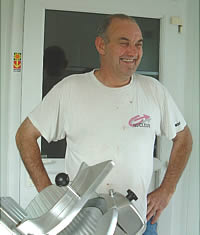 Therefore, finding a butcher who buys in local free-range pork was a priority when finding my feet in France. I have now discovered ‘Le Cul Noir Périgourdin’ (‘Perigourdian Black Arse’) – a rare breed free-range pork farm which is named after the breed of pig which they rear, and is also a butcher’s and a charcuterie which has a constantly bustling stall at all the biggest markets in the area. Now I can enjoy their wonderful produce guilt-free. From dried ham to boudin noir, from pâté to bacon, from trotters to roasting joints (with crackling – “avec couenne” – if ordered in advance), they seem to have everything and are about to expand their range. Amazingly, their noble product costs no more than the supermarket crud.

Naturally, I was compelled to visit the farm and ‘grill’ the farmer, Pierreyves Theaud. The first pigs I saw there were in smelly stalls. They had lots of room and straw, but I was disappointed. M. Theaud explained that these pigs were either getting their final fattening for the few weeks before their slaughter, or they were sows enclosed with a male in order to get them pregnant. Then we went outside to see the happy pigs and piglets who were enjoying all the freedom of the grassy meadows and woods. Pigs always seem surprisingly big and scary in the flesh, but the piglets were so sweet. I was sad not to be able to get close enough for a cuddle. 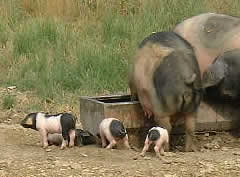 M. Theaud, who works with his wife, Regine, brother-in-law, Daniel Mazeau and their employees, looks like a jolly farmer, and greeted me with blood on his hands and apron. The 250 – 300 piglets born at the family farm each year are butchered by M. Theaud, and Regine, an ex-secretary, takes care of the charcuterie side of things, making the huge range of goodies which they sell.

I asked whether they started breeding Le Cul Noir because they had identified a gap in the market.

“No. We started the farm in 1984, and changed from normal ‘white’ pigs to the Cul Noir in 1998. The problems that the white breed has due to commercialisation and intensive farming meant that we decided to change over. We farm free-range because for the comfort of the pigs, and we wanted to produce good quality pigs.”

“Cul Noirs aren’t suited to intensive farming methods, so apart from their naturally more flavoursome meat, there are also flavour and textural benefits from their outdoor lifestyle and slow growth (16 – 18 months rather than the more usual 5). The meat is simply of a much higher quality, and it is totally different from eating normal factory pork.”

What are your business plans? Expansion?

“No. We’ll be expanding our range of cooked products, though, to include casseroles etc, on top of all the charcuterie we already do. So the size of the farm won’t increase, but we will be selling the pork in a larger variety of products”.

Le Cul Noir Périgourdin can be found at the Dordogne markets of St Astier, Exidueil, Riberac, Piégut, Thiviers, Périgueux, and Brantôme. If you don’t live or stay in the area, check out your local markets and ask around. There doesn’t seem to be a definitive association of free-range farmers in France, but it really is worth the effort of finding your local source of healthy, happy, flavoursome meat.