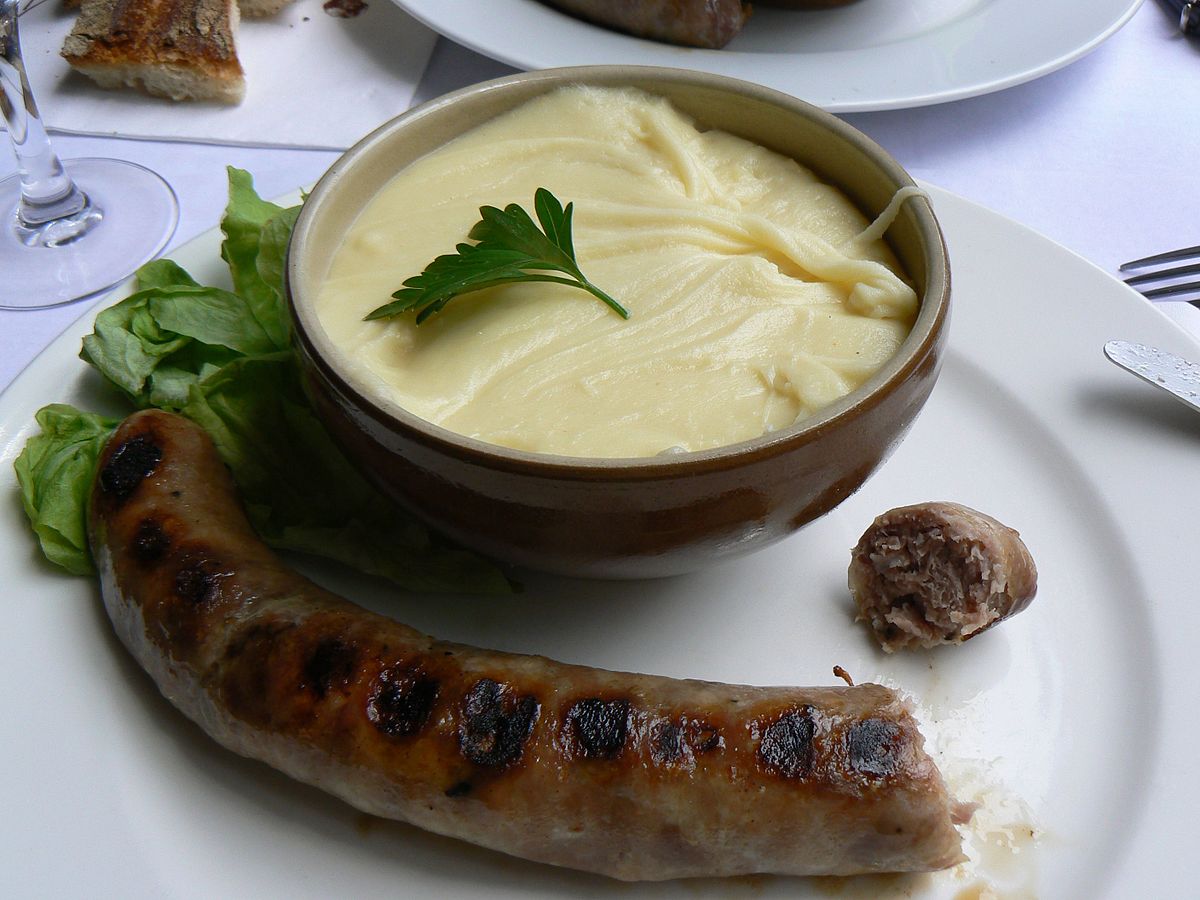 A rich puree made with Tome cheese and mashed potatoes, aligot is made by skilled men with vast wooden paddles and often served alongside local sausages or spit-roast veal, lamb or pork. Aligot transcends its simple ingredients and tastes best eaten outdoors in a crowded village square on a summer’s evening. You’ll never want to go back to plain mash potatoes again.

Rich and warming without a trace of pretension, the result of good fresh produce, simple cooking and a bit of a workout.

ALIGOT, THE RIBBON OF FRIENDSHIP

People travel a long way to come to the Aveyron and enjoy specialties such as the aligot, a dish made from melted cheese blended into mashed potatoes (often with some garlic) that is made in L’Aubrac (Aveyron, Cantal, Lozère, Midi-Pyrénées) region in southern Massif Central of France.. The aligot which used to be a complete meal has now become a festive dish. It is now called le ruban de l’amitié, the friendship ribbon.

A MEAL FOR THE PILGRIMS

Aligot has been “threaded” since the middle ages. When the pilgrims were going to Santiago de Compostela, they crossed the Aubrac and stopped at the Dômerie d’Aubrac, a monastery. The monks looked after them and served them a dish with bread and cheese that helped them to relax them after their long journey (l’aliquid), that became aliqu’ot (that comes from the latin word “ali quod” which means “something”). In the 19th century, potatoes replaced the bread.

A CELEBRATION DISH FIT FOR A BANQUET

The growing fascination over the aligot comes of course from its local origins in the Aubrac. But watching huge men making long threads with vast wooden paddles in a large pan is like a show that you never grow tired of. Every Aveyronais who prepares it for a banquet knows that you need big biceps and tenacity to make a light and supple aligot. You need to stir the aligot until it takes on an opalescent gloss and forms long silky ribbons which are folded over and over in the pan.

A DISH THAT YOU CAN BUY ON THE MARKET
On a local market in the Aveyron or bordering department, you may have seen the aligot being prepared by a strong man wearing a traditional black outfit. The crème fraîche and the tome fraîche de Laguiole (2 to 5 days old) is unpacked and mixed with mashed potatoes. As he threads it higher and higher, the crowd gathers to admire his skill and queue to buy it. If you have fallen for it, the best way is to reheat it at home in a microwave and add a little bit of garlic to taste.

Peel the potatoes and garlic, cut in chunks and cook together for 20 minutes in boiling water. Thinly slice the cheese. Remove the garlic, and mash the potatoes. With a wooden spoon, incorporate the cheese and crème fraiche while vigorously folding to air the mixture until it the consistency forms a ribbon when you lift the spoon.

Add the cooked garlic cloves smushed into a paste (optional).