Fruit growing is a speciality of the département which is renowned for its plums (the famous pruneaux d’Agen), strawberries, succulent melons and the pomme d’amour, Marmande tomatoes. Good quality wines are produced in the Duras and Buzet regions, and the area is one of the last tobacco-growing centres in France, having been the first in Europe to grow tobacco on a commercial scale. Heavy industry is almost absent, thus preserving the character of the region and making it a particularly enjoyable place to visit.

The gourmet dishes on offer in the region are truly outstanding: ducks, geese, with their delicious fat, game, Landes chickens, foie gras, Agen prunes, Bayonne ham, walnuts, truffles. All washed down with the ripe and fruity Buzet and Duras wines and not forgetting Armagnac, the oldest brandy in France.

First mentioned in 1461, this potent liquor can be purchased from local markets along with Eau de vie de Prune d’Ente, Pruneaux à l’Armagnac and Vieille Armagnac. The distillation of this delicious brandy was the result of a combination of cultures and techniques: Roman for the vines, Arab for the stills and Celtic for the barrels. Add to this the particular soil, climate and oak available and you have the ideal, unique ingredients for production of the magnificent Armagnac.

The Greeks who settled in Marseille around 600 BC taught the Gauls to make wine. Under the Romans; Bordeaux, the Rhone valley and the Iberian Peninsula also became well-established wine-producing regions. In 92 AD the Emperor Domitian, threatened by competition, ordered half the Gallic vines pulled up. When restrictions were lifted in 280, regions such as southwest France started to produce their splendid wines again.

During the Middle Ages, each monastery produced its own wine for the sacrament and for subsistence. Wine was served at banquets, mixed with spices and honey to temper its youthful harshness, but also blended with herbs and spices (including chilli peppers) to create medicines.

The best wines of the Lot-et-Garonne are to be found in the northwest corner. Here, a stone’s throw from the official Bordeaux vineyards, the Côtes de Duras reds are usually made from 100% Merlot or Cabernet Sauvignon and the whites from Sauvignon, Mauzac or Semillon.

The wines of Buzet are very popular, while others such as Brulhois, Marmandais, vin du Tsar, vin du Mézinais (a dry white wine produced from the colombard grape is an ideal apéritif.) and Agenais table wines are all well worth trying.

Ducks and geese are migrating birds. Before migrating they gorge themselves with food and store it in their livers for the long journey ahead. Farmed birds have lost the instinct for migration but they still have the same digestive system. Force-feeding doesn’t hurt them because there is no obstruction in their necks, and they have a gizzard instead of a stomach. The liver, and every other salvageable part of the duck including the gizzard and neck, is turned into pâtés, terrines, rillettes, galantines or the much-loved confit. To eat foie gras at it’s best it needs to be room temperature or even warmed, with a small piece of toast or some warm fresh bread and a local sweet white wine. 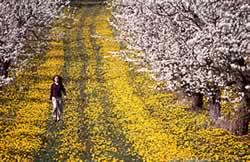 Although prunes are simply dried plums, the word ‘prune’ comes from the Latin word for plum, prunus. According to the earliest writings in which the plum is mentioned, the species is at least 2,000 years old. To complicate matters for non-fluent French speakers, the French call all plums prunes! Their word for a dried plum or prune, is pruneau.

The plum is the fruit of the genus Prunus of the rose family (Rosaceae). Like the peach and cherry, it is a stone fruit. Plum varieties that can be dried without fermenting are called prunes. Such plums have firm flesh and contain a sufficiently high level of sugar, qualities that favour their being preserved by drying, which is done in dehydrators or in the sun.

The world famous Agen plums have a high sugar content that allows them to fully ripen on the tree without fermenting around the stone. Each tree produces up to 300 pounds of fruit. It takes three pounds of the fresh fruit to make one pound of dried plums. The Lot-et-Garonne département produces 64% of all prunes in south-west France, the area which accounts for almost all French prune production.

Ordinarily, a plum tree starts to bear fruit four to six years after planting and reaches its full production capacity (150 to 300 pounds of raw fruit per year) some time between its eighth and twelfth year in the ground. The orchards will then continue to bear fine quality fruit on a commercial basis for about 30 years. In an age where most fruit are now harvested in the early stages and ‘mature’ in various man-made mechanisms, plums for prunes are one of the few fruits allowed to fully ripen on the tree before they are picked for processing. Fruit firmness and natural sugar content determine the picking date.

We gratefully acknowledge the support of the CDT du Lot et Garonne in the preparation of this article.